‘Your mother’s a shrew. She wouldn’t know Christmas spirit if it kicked her up the arse’ 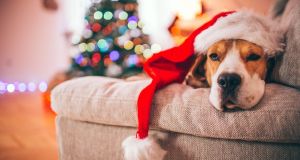 ‘For fu**’s sake Denis will you cram a sock in it you furry little sh*t!?’ Photograph: istock.

“I didn’t even want the bloody thing. My mother always says it’s bad breeding to get it this early.” The man was fairly roaring at the woman as they stood together on the street, a butterscotch coloured spaniel on a lead howling in sympathy with, or maybe in objection to, the man’s yells.

For a moment, I felt bad for the woman bundled up in a coat like a boiler jacket, in case she might be the victim of a bullying partner; the sort of man who routinely shouts at everyone, and treats his family worst of all. That was until the woman let out an unholy shriek, first directing her ire at the dog. “For fu**’s sake Denis will you cram a sock in it you furry little sh*t!?”

This all felt too interesting for a darkening Sunday in early December. Denis? It made the dog sound like a retired accountant with a son doing the Leaving Cert. The dark was settling like a cold, sodden blanket over everything. I paused across the street, gracelessly eating an apple, and blandly observed this domestic like a boss-eyed goat masticating its lunch while watching two rams scrap in a nearby field.

She rounded on the man next (Denis had obediently shut his mouth by this point). “Bad breeding!?” she bellowed. “Are we horses? Your mother’s a SHREW! She wouldn’t know Christmas spirit if it kicked her up the arse!”

It was then that I saw the source of the tension, and understood at once. The shape had got lost in the background gloom, but behind them was the unmistakable conical menace of a fresh Christmas tree recently excised from the earth. They’d cracked, you see. They’d thought their relationship could withstand putting up the tree this early. But I knew better. Even Denis knew better, though no one had heeded his warnings. They say dogs are prescient that way.

The couple, both of them slightly shocked by the woman’s sudden and rather excoriating verbal abuse, seemed to remember that they were not in the privacy of their own home, nor, indeed, in an illegal fighting pit circling one another with flick knives. They moved to pick up the tree and head on their way.

Denis, likely thoroughly ashamed of them both and having some late tax returns to file, walked behind quietly, no doubt wondering what the cost of the “your mother is a shrew” comment would be for all of them in the long run. His chocolate eyes flickered between them.

I continued the five or so minutes home, enjoying my apple and the briskness of the chill, feeling appreciative that I wouldn’t have to worry about the Christmas tree for a couple of weeks yet. Like a trip to Ikea, putting up the Christmas tree will always dangle a relationship over the precipice. If you’re not in good fettle to begin with, it can fire the whole thing over the edge. Many a marriage has snapped over half-functioning fairy lights or a deceased family member’s broken ornament, or, even worse, who forgot to water the tree (if it’s a real one), or who was stupid enough to water the tree (if it isn’t).

When I opened the front door, I was alarmed to see that the boxes of Christmas decorations were waiting inside, and the tree (a false one), was lying sideways in its bag, zipped up two thirds of the way with stray limbs jutting out at unnerving angles, like something out of the mortuary. From the kitchen, I heard himself shout “Are you back? I thought we’d get going on the tree!” I stood there, coat still on, considering my options. Would it be immature to run?

Suddenly, the tree rustled inside the bag as though resurrected by the “Christmas spirit” the woman on the street had been screaming about. I yelped in shock, and himself came running, holding a spatula, whether for defence or offence, I never found out. Out of the bag surfaced two yellow eyes in a spherical, velvety face. It was the cat.

“Furry little sh*t”, himself said affectionately, before scratching her gently behind the ears. He looked at me and pointed at the tree with the spatula. “Well?”