Michael Harding: I remained a boy until I was 60. Then my depression began

It took 9 years to wash the melancholy out of my system. Now I’m a happy boy again 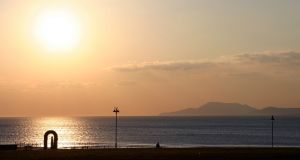 I met a woman on the street in Bundoran who told me that I was driving dangerously. I had just parked and she parked behind me.

“I was following you,” she said, “and your camper van was wobbling all over the road.”

“You shouldn’t be following me,” I said, “unless you’re desperate.”

I used to lie on the beach in Bundoran with my mother. My father wouldn’t get out of the car. He said the sand got into his eyes, and that he came out in spots if the sun got near him. So me and mother lay all day on a Foxford rug and I was a happy boy.

And I remained a boy until I was 60; when my mental and physical health deserted me and even the trees that grew around the house I lived in seemed to be choking me. That was the beginning of my depression, which drove me to composing long winded meditations on life without God.

It took nine years and six books of memoir to wash the melancholy out of my system but now I have become a happy boy again. The yellowing leaves of autumn don’t make me sad anymore. And I’m looking forward to winter.

Yet now, nearing 70, being me feels like a gift, no matter how bleak the weather

When I was young I was fond of a Latin proverb – per tenebras ad lucem; through the darkness towards the light. I discovered it on the badge of a nurse I danced with; it shone on her lapel, and her eyes shone too, and it wasn’t easy to keep my feelings under control, although the sombre message on the badge restrained me, and I never told her how I felt.

I suppose after too much time on the tartan rug with mother I was already well primed for a solitary life and two long lingering decades on the cloisters of various monasteries.

Depression is a peculiarly inward convulsion. And like the heart attack and other occasional bouts in hospital, my melancholy was waiting for me from the day I was born. Whether it was in my DNA or emerged from the pattern of fractured relationships that constituted my childhood, I don’t know; but the truth is that I can only be as I was made. I didn’t choose to be so sorrowful.

Yet now, nearing 70, being me feels like a gift, no matter how bleak the weather. Being me is perhaps the deepest gift in my universe, or perhaps it is the universe that is the gift and being me is merely a lens.

And if I am a lens, then who does the looking, and on what does the lens focus? I suppose at the end of the day the little phrase from the nurse’s badge feels right; per tenebras ad lucem. Through the long shadows of life’s melancholy there comes eventually a faint and marvellous light, only visible in old age.

I would describe it as joy. Pure joy.

The woman who observed me wobble towards Bundoran invited me for coffee. We were standing on Astoria road, and I observed that when the Astoria ballroom stood on the corner, I used to hitch from Cavan just for the dances.

If I was a proud man, I might have insisted that I was not a wobbly driver, but being old, I admitted that driving a Renault Master all through summer had exhausted me and that my days in a camper van might be over.

“A nice little Corolla would suit you better,” she said.

I confessed that it was a car I had never owned, although a romantic history of Cavan town could never be written if the humble Toyota Corolla were excluded from the narrative.

The Bundoran woman took me to a lovely restaurant called Foam and at a proper social distance we talked over coffee about surfers, camper vans, home made bread and Bundoran in the autumn. But we never mentioned Covid-19 or depression or winter flus, or any other cloud. Because we’re wise enough to know that it’s imperative to seek a silver lining. Always. It’s like opting for love in a time of cholera.

“Did you ever read that book?” I wondered. “Love in the Time of Cholera.”

She said she never heard of it.

“But maybe my husband read it,” she joked. “He’s like yourself; he does too much thinking.”

And in a way I knew she wasn’t really joking.