Naveed Abbas arrived from Pakistan in 2011 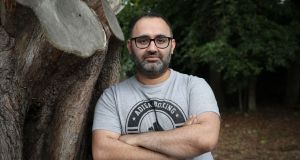 Dr Naveed Abbas who moved to Ireland from Pakistan in 2011. Photograph: Crispin Rodwell

When Naveed Abbas was recruited to work as a doctor in Ireland in 2011 he presumed the move would enable him to develop and progress his career. The Pakistani doctor was one of around 250 medical professionals brought here in 2011 to help meet the demand for doctors around the country. Abbas, who had already trained as a surgeon, remembers they seemed “desperate to find doctors”.

“They interviewed us, brought us to Ireland, went through the examination and sorted our registrations. But then they weren’t sure what to do with us. It was hastily put together.”

Originally from the KPK province in northwest Pakistan, Abbas trained as doctor at an army medical college in the Pakistani capital of Islamabad. Abbas was keen to support his family financially and was already investigating jobs in the UK and the US when the opportunity to move to Ireland arose.

“I wanted to support my mother and further educate myself. In Pakistan you reach a ceiling in your work which you can break through in the West. But Ireland was purely by chance.”

Abbas enjoyed working with Irish patients but quickly discovered the career progression he hoped for was far more complicated than he had originally anticipated. He had been initially given a role as a senior house officer (SHO). However, after one month in the position, he was asked by a consultant to start working as a registrar.

“I was very happy but at the end of the year when it came to renegotiating my contract and I told them I’d been working the registrar rota for the year, they said we don’t care what the rota says, your contract is as an SHO. I was working in a system that asked me to do two jobs but would not let me progress.” Feeling he was “being taken advantage of” at the end of his second year he decided to leave.

“Professionally you feel like you’ve been put into a box and the system isn’t interested in helping you get any further. The longer I stayed here the more I met other people, doctors from Pakistan especially, who had exactly the same feelings as me.

“I discovered the HSE wasn’t ready to accept immigrant doctors as a regular part of health system. They had brought us over to fill a gap but wanted to rotate us through different gaps rather than allowing us to move forward.”

After a spell in the midlands, Abbas moved to Sligo before relocating to Dublin where he spent time at two of the country’s major hospitals. He recalls witnessing the “stripping down” of smaller hospitals and “funnelling” of people into the capital city as part of HSE centralisation plans.

“The reason given for this centralisation at the time was the smaller centres were unsafe and if you go to hospital in Dublin, Cork, Galway or Limerick you’d get a good service. But it just meant the waiting lists exploded.”

Abbas says he also found most doctors who came from abroad were being placed in regional hospitals while more senior positions in Dublin hospitals were held by Irish practitioners. “You go to Kerry or the midlands and it’s full of Pakistani doctors. You get to Dublin and you find all the Irish are here.”

He felt that younger, less experienced Irish doctors were offered more opportunities than him. “They’re given training opportunities, they’re paid more, they’re put in charge of things they’re not experienced enough to do while we’re just there to make up the numbers. I couldn’t see anyone saying this was unfair or asking why this was happening.”

While in Dublin, Abbas met an Irish nurse who he quickly became friendly with. Coming from a country where there is no culture of dating, Abbas told this female colleague quite early in their relationship that he hoped to marry her. “I couldn’t do the boyfriend girlfriend thing and knew I wanted to marry her but I also knew she needed to take her time deciding what to do. She is from Dublin 4, born in Holles Street and went to UCD. I’m from a completely different world. It was a slow process but she was was amazing and put up with me.”

Abbas’ mother had hoped her son would marry a Pakistani woman but accepted the couple’s relationship in Ireland. “The great thing about my mother is she trusts me and she is completely full of love. My family was initially surprised but they weren’t unhappy, just curious. I met her family one by one, and she met mine. Our courtship was very gradual and defined with lots of talking and experiences exchanged.”

In 2019, the couple was married in three separate ceremonies – one in Ireland, one in the UK and one in Pakistan. “I told her I’ve married you three times now in three different countries. Not many people get to say that.”

The year before the wedding Abbas moved to Belfast to work for the NHS and the couple saw each other every weekend. Work in the North was “fairer, better” and more tolerant, he says. “There’s no question about it, you get to do more there. Things were equal, and I felt a lot better working in Belfast.”

Abbas is now back working as a surgical registrar in the Republic but says he will need to spend time in either the UK or the US to develop his expertise. The lack of career progression for immigrant doctors in this country means many are “jumping ship” and moving abroad where in a short time they become consultants or leads in departments, he says.

Despite his disillusionment with the Irish healthcare system, Abbas and his wife plan to build a life here and raise their children in Ireland.

“You don’t marry an Irish woman and then take her away from Ireland; it’s very difficult to do that,” he jokes, before adding that he has “zero regrets” about his decision to move here in 2011.

“Being here has only made me a better person. I love Dublin. I think it’s the perfect size. In London I always found people were very inflexible but I think Irish people have more laxity which gives them humour and friendliness. I also like Ireland’s record in human rights and the way they’ve gone about international work.

“Regardless of the ups and downs of racism which do exist here, overall as a nation I don’t think Ireland has a mindset of colonialism. They’ve suffered themselves so they understand.”

Can’t get your beauty sleep? Here’s how to get a good night’s rest
Real news has value SUBSCRIBE