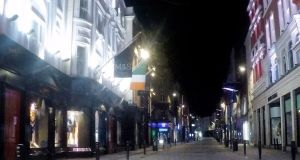 ‘I’ve known this city in many a deluge, mate, I’m just deeply unfamiliar with it in a drought.’

I don’t know about you, but I entered this pandemic confident that I was operating in a generation befitting my 58 cloudy, rain-soaked years. Now, however, at this unknowable point on the map of contagion, I seem to have skipped forward a couple of tracks and, like a badly scratched LP, feel about 20 years older than I was last March.

It struck me last weekend when, in an angry fit of boredom and in an effort to escape refilling the shagging dishwasher for the hundredth time that week, I got into my dented motor car, put my foot on the accelerator and, with no particular destination in mind, ended up parking on Dublin’s Merrion Square. I turned the engine off just as twilight was flashing the moon a nighty-night wink.

Saturday night and the city lay open like an empty suitcase. Bar a lone garda diligently surveying the lonesome air outside the side entrance to the Dáil, Merrion Square was deserted. Maybe in his isolation, he was trying to figure out – given some of our elected officials’ penchant for a suntan and a party – just who needed protection from whom.

There was life on Grafton Street; a busker loud and mournful belted out his bespoke lyrics: “I wanna know, have you ever seen the rain falling on Dublin town.” I silently answered in the affirmative. I’ve known this city in many a deluge, mate, I’m just deeply unfamiliar with it in a drought.

I found myself following the bruised thighs of a young girl in booty shorts, as she and her similarly attired friend wove their way down the sparsely populated street.

It was a chilly August evening; the lacy edges of the child’s flimsy cotton shorts skimmed her goosepimpled, patchily spray-tanned skin. I’m of the opinion that anyone can and should wear whatever they damn well like, but sometimes you’d question the whimsical cruelty of the fashion industry.

Outside Dunnes Stores, closed for the night, people, mainly men, quietly queued up for food from a mobile soup kitchen. I was struck by their stillness, their ordinariness, their unremarkable shoes and jackets, their backpacks hanging from hunched shoulders, their prosaic faces looking at the ground.

They are us, I thought. We are them.

The food line stretched down beyond Chatham Street, where a pale young girl sat on the pavement, drinking soup from a paper cup, her thin back propped against a litter bin.

I walked then down a sidestreet splitting at the seams with beautiful, silky-haired young thangs, nails like talons, their velvet skin puckered up from the cold. Their mouths opening and closing like swollen fish, spilling out their secrets, they too queued up, for entry to a busy bar.

A boy sitting hunkered up on the street near Grogan’s caught my eye as I passed. He looked so like the son of a friend of mine – solidly built, blonde, brown-skinned, strong – but this boy’s face was steeped in rage.

“What are you f**king looking at?” he roared, shaking me out of my reverie. I looked at the ground and walked on, hoping not to feel his hand on my shoulder.

Aungier Street might as well have had tumbleweed blowing down it; on either side, closed-up shops and empty buildings

You are not invisible, I reminded myself. You’ve lost your city-born air of indifference, lost the ability to notice things while seeming to notice nothing. Stalled in suburbia for however many months now, you’ve morphed into Gormless Gertrude, fresh off the bus from Bally-go-shag-me-sideways, wandering the city streets, bewildered and agog.

Aungier Street might as well have had tumbleweed blowing down it; on either side, closed-up shops and empty buildings. I walked past a whole terrace of vacant-eyed properties spitting neglect. I know so many people looking for homes who could, if rents were affordable, populate this city with imagination and industry.

Camden Street was another island of youth, taxis spilling out girls in scrappy sandals and boys in muscle-fit T-shirts. It was reviving, energising, to drift along in the wake of their perfumes.

Quite by chance I bumped into a friend, and in that way that Dublin can sometimes conjure, the night lifted and we went to a bar, talked, ate noodles from paper boxes.

Baggot Street before midnight. I watched a young man whip a plastic sack from a skip and crash its contents on to the street.

Driving back to the burbs, the night echoed to the music of shattered glass.