Michael Harding: I went home to my microphone, and my invisible companions 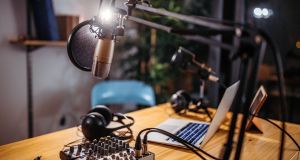 Even though podcasting is not as intrusive as a Zoom conference, it can be pleasantly intimate. Photograph: iStock

I was confident that the lockdown would eventually come to an end. The people in the health services did a magnificent job and when it was announced that travel restrictions within the country would be lifted at the end of June I was elated. I intended being off down the road in my camper van on the first day of July.

The biggest thing I learned during the lockdown was how to use digital media. I remember my first Zoom meeting. It was with some young American students and I got stressed beforehand, as if they might be going to walk into my private study. Then I reminded myself that they were actually in America, far enough away for me to feel safe.

I spent an hour before the meeting fussing around the study to make sure everything looked okay. Whatever corners of the space might show up on screen had to be sanitised, to give the impression that I was a writer of some gravity. So any whiskey or gin bottles within range of the camera had to be removed from shelves and placed on the floor.

In hindsight there was nothing to worry about, unless I had been as daft as the MEP from Roscommon who attended an official meeting online without his trousers. But I certainly wasn’t going to be caught sitting on the side of a bed with bare legs sticking out of my underpants.

When the young American faces appeared on screen that afternoon I could see their eyes wandering around as they examined the shelves behind me.

Zoom, I concluded, can be dangerously personal.

On the other hand podcasting is safe because people can see neither a face nor the room in which I am recording.

And even though podcasting is not as intrusive as a Zoom conference, it can be pleasantly intimate.

I try to conjure up an audience as I speak. I imagine my listeners walking in public parks or along the coastline with headphones. I try to feel I’m in their space, and gradually an air of intimacy envelops what I’m saying.

Before the lockdown I had 30 gigs arranged for 2020 but I cancelled them all. So podcasting is the alternative. It provides me with an audience, which a storyteller desperately needs.

I am able to find intimacy as a virtual companion to strangers in the immense void that exists beyond my microphone. And it’s all great fun, having a relationship with people who are not actually there and whom I have never met.

When I do meet real people I get dizzy with excitement. I’m like someone coming into sunlight after months in a dark room or a cave.

Last week I met a man on the bog road; not a screen image or an imagined person at the other end of my microphone, but a living human sitting on a tractor with a dog in the link box behind him.

“That must be hard work,” I observed.

Being so close to his physical presence made me tingle with excitement. His bronze arms, and smiling face appeared more luminous, more sensual and real than ever before.

“I thought the bog was a silent landscape,” I said.

“Ah no,” he replied. “In normal times there does be planes always going to America.”

“That’s certainly a new aspect of traffic pollution in Leitrim,” I joked.

Which appeared to irritate him.

“You’re not in Leitrim,” he reminded me. “This is Roscommon.”

It’s a mistake I make regularly because I live on the border, and though my house stands on Roscommon ground I am surrounded by Leitrim fields.

“Fair enough,” he said, unconvinced by my excuse, “but you’re in Roscommon now.”

“Did you ever use Zoom?” I wondered, trying to change the subject and presuming that he might know as much about Zoom conferencing as I know about footing turf.

“I use it all the time,” he declared. “The cattle marts use Zoom to sell stock. I do watch it streaming live, and then I can buy what I want. Very handy.”

His foot kicked the tractor engine into motion, and he drove away towards the bog, the dog in the link box eyeing me cautiously as he passed.

And then I went home to my little microphone, and my new world of invisible companions.

The Michael Harding Podcast is currently available on Patreon.com.