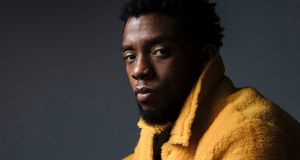 Black Panther was the first superhero movie to be nominated for a best picture Oscar and one of the highest-grossing films of all time, bringing in over $1.3 billion (€1.1 billion). Central to the appeal of this 2018 blockbuster was its star, Chadwick Boseman, who has died aged 43 of cancer.

Heading a predominantly black cast, a rarity in Hollywood let alone in the superhero genre, he exuded intelligence and warmth as T’Challa, king of the fictional African country Wakanda, who doubles as Black Panther when he ventures into the world at large to stop his countryman, Erik Killmonger (Michael B Jordan), wreaking havoc.

The film, boldly directed by Ryan Coogler, combines the customary blockbuster ingredients – cutting-edge special effects, spectacular chase and combat sequences – with an unusual afrofuturist aesthetic and a complex, serious approach to issues such as racial solidarity, slavery and colonialism. Contemplating mortality, one character asks to be buried “in the ocean with my ancestors who jumped from ships because they knew death was better than bondage”. It’s the sort of line you don’t hear in Iron Man.

Boseman had made his debut as Black Panther in Captain America: Civil War (2016), and would go on to reprise the role in Avengers: Infinity War (2018) and Avengers: Endgame (2019). All were products of Marvel Studios and together formed part of the Marvel Cinematic Universe (MCU), with its interconnecting storylines and characters. The joy of Boseman’s work in the series, and especially in the Black Panther movie, was that it transcended the general corporate nature of the endeavour; the role, and the empowering message of that film, were of immense importance to him. He took research trips to South Africa to prepare for the part, traced his own ancestry and studied African martial arts and Masai warriors. “It’s a sea-change moment,” Boseman told Rolling Stone magazine in 2018. “I truly believe there’s a truth that needs to enter the world at a particular time . . . This is the time.”

Indeed, Black Panther was released at the height of #OscarsSoWhite, the backlash against black talent being overlooked by the Academy Awards, and in the aftermath of disparaging remarks that US president Donald Trump had made about Africa. It faced its own racist opposition in the form of a Facebook group (later shut down by the social media company) established to artificially lower the film’s score on the influential reviews aggregator site Rotten Tomatoes. But the picture was an unambiguous critical success as well as a commercial one. Nigel Andrews in the Financial Times called it “crashingly enjoyable, frequently exciting and even, when it wants, borderline witty”.

Boseman was born in Anderson, South Carolina, the son of Leroy, who worked for an agricultural company and also as an upholsterer, and Carolyn, a nurse. He was educated at TL Hanna high school, where he first discovered an interest in theatre when he wrote a play based on the shooting of a classmate, and at the historically black Howard University, Washington DC, where he studied directing. He also won a place on a summer theatre course at Balliol College, Oxford; one of his teachers at Howard, the actor Phylicia Rashad, arranged for his costs to be covered by celebrity friends of hers including Denzel Washington. After Boseman was cast in Black Panther, Washington joked: “Wakanda forever, but where’s my money?”

He taught acting at the Schomburg Centre for Research in Black Culture in Harlem and spent some years scraping by in bit-parts on TV shows including ER, Third Watch and CSI: NY, before getting recurring roles on the series Lincoln Heights (2008-09) and Persons Unknown (2010). His film career took off when he played the baseball player Jackie Robinson in 42 (2013). “It’s the way he carries himself, his stillness,” noted that film’s director, Brian Helgeland. “You just have that feeling that you’re around a strong person.” He came to specialise in movie biopics, completing a hat-trick of real-life American icons by playing James Brown in Get On Up (2014), co-produced by Mick Jagger and co-written by the British playwright Jez Butterworth, and the civil rights lawyer Thurgood Marshall in Marshall (2017). “I don’t think I would’ve been ready for Black Panther had I not done those three roles,” he said.

His work after Black Panther included the thriller 21 Bridges (2019), which he also produced. Preparations for a Black Panther sequel were in the early stages. “The only thing I can say is that, for people who are hungry, the food is being prepared,” he said in 2019. His final role is in a film adaptation of August Wilson’s play Ma Rainey’s Black Bottom, to be released later this year.

However, his death means that his most poignant performance will be the one he gave in Da 5 Bloods (2020), Spike Lee’s film about four Vietnam veterans in their 60s who return to that country decades after the end of the war to collect the remains of their fallen captain. The older cast members, including Clarke Peters and Delroy Lindo, play their characters in both the present-day scenes and the early-1970s flashbacks, without recourse to de-ageing technology or make-up. Consequently, they look creaky and weather-beaten next to the captain, played by Boseman. Having never had the chance to age, he is preserved forever as the blemishless figure of memory, which is how the actor will now remain for audiences also.

He is survived by his wife, Taylor Simone Ledward.

Enjoy some Halloween fun with this bewitching cake
7

Sinéad Burke: It’s never too early for children to learn to be curious and kind
8