Grouchiness, Covid-19 and the horror of America made me try to kill a bumble bee 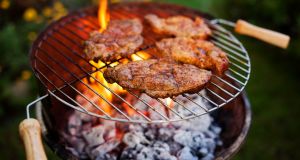 The tension mounted as my friend flung vegetables and steaks onto the grill.

I didn’t learn to swim until I was 60. That’s how slow I can be. As a boy my mother would take me to the lake and insist I fling myself into the muddy green soup like everyone else.

“Like everyone else” was a favourite phrase of hers.

But when I dived into the lake panic hardened my lungs. I couldn’t breathe and when I surfaced and looked around, it didn’t seem like the other swimmers were suffering the same distress as me underwater.

Being underwater can be a frightening place, but not as frightening as the sidewalks of America. And after watching a good man being choked to death by police on television a few weeks ago, I wanted to stop writing altogether. There wasn’t anything left to say. Scream yes or howl with rage perhaps. But it felt like life had got so dark that there was no point in storytelling or in pretending that the world was beautiful anymore.

The following morning the General was on the phone.

“We should have a barbecue after June 9th,” he suggested.

Although four men cooking meat on a fire was not exactly my idea of joy, even if it was beside a lake and blackbirds were singing in the trees. I went anyway, and the four of us sat around at a social distance, being male and grumpy.

We were beside the lake shore, and the birds did sing, and a little black and red moth flitted about the lawn.

The General insisted it was a butterfly.

“I can clearly see the wings; they’re sloped like a butterfly.”

I clenched my teeth and said, “It’s a moth.”

I was so frustrated that I checked Wikipedia on my phone. It was a cinnabar moth with red and black wings, but the General simply dismissed Wikipedia. The tension mounted as he flung vegetables and steaks onto the grill.

“Why do you throw everything onto the barbecue at the same time?” I wondered.

“Because it’s hot,” he replied. “How else are we supposed to cook?”

“Put on the starters first,” I explained. “Cook them. Eat them. And move on to the vegetables. You should only put the meat on last. That way the steaks don’t turn to ashes.”

He sneered. I was furious. So I said,

“I’ll go and fetch some beer.”

“You can’t drink if you’re driving,” he taunted.

“I’ll sleep in the camper,” I replied.

And I went off to the campervan pretending I wanted beer, but I was just raging. And while I was sitting in the cabin trying to cool off, a bumble bee flew in the passenger window.

Now I really like bumble bees. They’re big and furry and remind me of short trousers.

But before I knew it I had smashed my fist against the window to silence him. Luckily for the bee I missed.

“What did you do that for?” the bumble bee wondered.

“I was angry,” I explained.

“So you think just ’cos you’re angry,” he continued, “you can squash the guts out of someone like me?”

I wanted to explain to him that sometimes the General can be a cantankerous old mule. And I wanted to tell him that sometimes it’s really difficult to write about anything beautiful because maybe I’m depressed, or confused about the meaning of life, or just in despair about Covid-19, climate change and the future of America.

“The world is on fire,” I whispered. “And I want to cry or shout or do something like die.”

But the bee wasn’t going to bother his arse with me or my neurosis for one more second. Instead he got his bearings and flew out the window as fast as a space ship leaving Miami.

When I returned to the barbecue I had cooled down and I told the General I was sorry for being tetchy.

“We’re all stressed,” he muttered, which was the closest he could get to reciprocating my apology.

“Perhaps we should go for a paddle?” he suggested, looking at the lake.

He was trying to humour me.

“Do you have anything to write about this week?” he wondered.

“Oh there’s still plenty to write about,” I said as we rolled up our trousers. “The song of blackbirds. The flight of a moth. And the luminous wings of a bumble bee.”