‘Moving to Ireland was the best decision I ever made’

Noli Alngohuro arrived from the Philippines in 2000 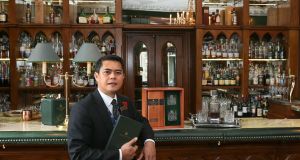 It was Friday, November 3rd, 2000 and a heavy mist lay low above the green fields as Noli Alngohuro travelled west from Dublin to the picturesque village of Cong. The Filipino physiotherapist had arrived in Ireland the previous day and was heading west to begin his new job at the five-star Ashford Castle in Co Mayo. The air was damp and cold and 23-year-old Alngohuro, who had left his heavily pregnant wife back in the Philippines, felt deeply homesick. Had he made the right decision leaving his family and career in physiotherapy to travel halfway around the world for a job in a hotel?

Alngohuro still recalls his first glimpse of the hotel as “something like a movie”. “It wasn’t like the pictures I’d seen – they don’t do justice to the building that emerged with the lake in the background. Jesus, this was where I was going to work.

“Ashford Castle was looking for wait staff, and my family had a friend who ran a recruitment agency in Galway. I put in my application and got the interview. They said I was overqualified but I didn’t mind working as a waiter. I was very upfront that I was doing this as a stepping stone in my career.”

Alngohuro always knew he’d need to travel abroad for work. The Philippines “pretty much produces people to work abroad”, he says. “I think it started in the 1960s when Americans in the Philippines started training nurses to work. That started the conveyor belt of nurses going to the US. Then it was engineers going to the Middle East, and by my time, in the 1990s, most of the boys in my school were sponsored by Norwegian companies to become seamen.”

His brother encouraged him to try working as a mariner but he had no interest in spending 10 months of the year at sea. His plan was to study law but in the end he settled on physiotherapy. After graduation he spent one year volunteering as a physio while making plans to move to the US for work.

The Philippines was producing thousands of physiotherapy graduates at the time so paid work was hard to secure. He and his college girlfriend, Milric, also a physiotherapist, were married in 2000 and a few months later he boarded a flight to Dublin.

“I planned to spend one year at the castle and after that I would pursue physiotherapy, maybe in the UK. My son was due the month after I arrived in Ashford, and the homesickness made settling in hard. Coming up to Christmas I told my dad I wanted to go home. He advised me to give it time.”

Two decades on, he still recalls with fondness the warm welcome he received at the hotel and locality. “I thought the village was beautiful and was surprised that people popped their heads out of cars to say hello. I thought there was an election campaign going on but at work they said, No, people just wave at each other here.”

Each night after work, Alngohuro walked to the village pay phone, where he spent more than half his wages calling his wife and parents. On December 26th, after nearly two months in his new job, his son was born. “I was working that day but spent most of it looking out at the lake thinking: I have a baby.”

He soon discovered that his credentials as a physiotherapist were not recognised in the UK. After a year in Ireland he went back to the Philippines for three months. He returned to Ireland having convinced his wife to join him in Cong. She arrived in Ireland in 2002 and started working at Ashford Castle while their son, Auxille, spent three years with his grandparents before travelling to Mayo.

“It felt crazy the sacrifices we had to deal with back then. The plan was if my wife didn’t settle we’d go home and set up our own business. She was homesick at the start, just like me, but then we met some friends and started to build a community.”

At one of the most elite and expensive hotels in Ireland, whose guests have included American presidents and Hollywood A-listers, Alngohuro has grown accustomed to seeing vast sums of money being spent on lavish dinners and celebrations. “You’d be serving a table that spends €3,000 on a bottle of wine, and you’d have to work for two months to earn that. Some people feel that’s not fair but you have to put it in perspective. Nothing in life is fair. And maybe that family was just lucky and it’s part of a cycle.”

He is now bar manager at the hotel. His career development in the hospitality sector has given him huge satisfaction. He particularly enjoys mentoring young people starting out in the hotel industry.

While his overall experience of living in Mayo has been positive, he says he would “be lying if I said people hadn’t told me to go home to my own country”. He knows some Filipinos who eventually left because of the racism they encountered and recalls one incident when guests at the hotel asked whether he felt guilty for “stealing a local’s job”.

“I told him it was Ashford Castle who had reached out because they had a shortage of staff. My colleagues overheard the conversation and were furious. They couldn’t believe that mentality actually existed. One of the waitresses told me she was ashamed. But I said it was fine, that it was my job to educate them. If someone shows you hate, you can’t throw hate back at them. My approach is to defuse the situation, not be confrontational. Yes, racism is real, but this is how I tell my children to approach it.”

Alnghohuro now has four sons, with the eldest in college studying biomedical engineering. “It’s different from where I grew up – we were free to roam around and play with friends. Kids here don’t play around the streets after school. But I don’t worry about locking the door in Cong, there’s a real feeling of safety. Plus the people in the village were the defining factor in our decision that we wanted this to be the place where our kids grow up.”

The family bought a house in the village in 2013 and take holidays in the Philippines every second year. “There’s always been a plan B to go back home; we have a house back there too. But for the kids, Ireland is home. I don’t have any regrets about coming here. I think it was the best decision I ever made.”

Who's that lady? The extraordinary life of the Marchioness of Dufferin
10