‘It wasn’t awkward – it was wonderful.’ The couples separated by Covid-19 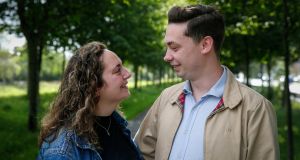 Cahal Sweeney from Dublin and his girlfriend Abbi Purches from Boston who have been separated for over six months during Covid-19. Photograph: Crispin Rodwell

Cahal Sweeney and Abbi Purches met as countless others have before them: in a Dublin bar, in January, when Cahal asked if he could buy Abbi a drink. So far, so usual… except that things were about to turn decidedly “rom-com”.

“I was studying abroad from a month-long programme with DCU,” explains Abbi, originally from New Hampshire. “I went home, back to college in Boston, on January 22nd.”

Despite the brevity of their time together – they had spent just a fortnight in each other’s company – the pair realised that they wanted to pursue a relationship.

“We had a couple of trips planned for the future. We realised we wanted to be back together and to learn more about each other, even with 30,000 miles between us,” says Cahal.

Abbi had planned to visit Europe in March; Dublin-based civil servant Cahal was due to visit California with Abbi in July for a friend’s wedding, which was eventually cancelled.

Last month, it was estimated that around 9,000 Europeans are cut off from partners outside the EU, along with thousands of others similarly stranded apart elsewhere. One Facebook group for people unable to join their partners because of travel bans during lockdown, founded in July, got 50,000 visits in its first week.

Out of the various social media groups and websites has sprung a campaign called Love Is Not Tourism, to lobby countries to carve out travel exemptions for couples in committed relationships. “We are not tourists,” the campaign’s website says.

It didn’t take long for the reality to the situation to become apparent to Abbi and Cahal. “I was supposed to come to Ireland for Patrick’s Day, but I spent the whole day sobbing,” says Abbi. “That was the hardest part.”

Starting a relationship in the shadow of a global pandemic certainly came with complications, but it did make the new couple ever more determined to maintain their romance.

“In a sense, there was a wait-and-see approach,” admits Cahal. “I expected this to be a temporary stopgap. It was certainly a unique way to kick off a relationship.”

The fact that overseas travel was off the table proved a boon for the new couple in some ways: “It provided an opportunity to learn a lot about each other, which you don’t really get if you’re seeing someone 24-7,” says Cahal. “Having a period to reflect away from your partner to see if something is working or not is an advantage. As litmus tests go, there is no a more extreme trial you could run up against.”

Adds Abbi: “It was hard not being with him physically, but doing our video call every week and realising his personality made me all the more attracted to him.”

Did they ever think of calling it quits? “No, there wasn’t any point,” says Cahal. “There were definite lows when we wondered when we would see each other next, but it never crossed my mind to throw in the towel.

The two reunited in Ireland earlier this month, and spent two weeks in isolation in rural Louth; a requirement on Abbi’s part as someone travelling from the US. The couple are already thinking ahead to restrictions for Cahal to travel to the US.

“I understand the stigma that Americans that have been travelling have faced, but people are assuming that Americans aren’t following certain restrictions,” she says. “In my case we did everything I needed to. I got tested before coming here and have been wearing my mask. I’ve gotten some looks on the streets if I’m talking [in an American accent] but that’s the nature of this thing.

“The spark was we had in January was still there, which was a fear of mine,” adds Abbi.

“It wasn’t at all awkward – in fact it was wonderful,” says Cahal. “It was kind of like a movie, the way we ran towards each other.”

For some couples, living in different countries has been a necessary evil, often prompted by professional requirements. For Australian-born Harshal Shah and Tipperary-born Catherine McManus, it has been a significant part of their marriage for years; while the couple lived in Australia, Harshal travelled to Thailand for weeks at a time.

Catherine now works in the Irish Embassy in Ankara in Turkey as deputy head of mission, while Harshal’s company, Pembroke Wines, requires him to base himself mainly in Ireland.

Before the pandemic, the couple had regularly visited each other every six weeks.

“Part of my job is understanding that you will move abroad, and I very much enjoy my job,” explains Catherine. “Harshal also loves his job. We thought we’d see each other every six weeks. Instead, I’ve gone four months without seeing him.

“For those first few months, my job was 24 hours a day, trying to get people home, offering advice, doing consular work. I didn’t have too much time to think about things,” Catherine adds.

As much as we are used to this, nothing can take away [the importance of] physical contact

“Catherine was here in Ireland for Christmas, and I was in Turkey in February and March,” explains Harshal, “When Ireland announced that it was in lockdown, we heard in embassy circles that Turkish airlines were stopping all flights. Thankfully, I got onto the one of the last special flights out of there.”

Catherine celebrated her 50th birthday in April with a number of Zoom events.

“Catherine was someone who didn’t like video calling, but that was one thing that opened up during lockdown,” says Harshal. “We had Friday drinks with our friends for her birthday, and then she had drinks the night after with her colleagues, all virtual, so I dialled into that. It was fun; memorable in many ways.

With wine supply seen as an essential service during lockdown, Harshal was not strictly confined to the couple’s home in Deansgrange, Dublin. He got a dog, while in Ankara Catherine acquired a pet cat.

“I was able to move around,” he reveals. “I didn’t mind the loneliness. I thought it was a good opportunity to cook more at home.

“As much as we are used to this, nothing can take away [the importance of] physical contact,” Harshal reflects. “But I do think it has benefited our relationship. We wouldn’t be the couple who spoke every day on the phone, but we did during lockdown. We were showing each other what we were cooking or wearing. It definitely enhanced the relationship from that point of view.”

Adds Catherine: “I didn’t realise how important that was. It sounds boring, but Harshal is now au fait with the minutiae of my days.”

Musician/writer James Martin had also been negotiating the distance in his relationship in the shadow of Covid-19. Like others separated by the pandemic, he and his Spanish girlfriend Celia Montes had faced the challenges that being in separate countries presents.

James and Celia met in Dublin two years ago, and moved into an apartment together in Dublin not long after. Last year, Celia left her job in Google and moved back to Spain to work on writing a book.

James initially split his time between Dublin and Granada, but when Spain was hit by coronavirus, things rapidly changed. In March, Celia’s parents were due to fly from Spain to Ireland to meet James’s family. It was an exciting milestone, but one that never arrived.

“I was in Ireland when Covid hit initially,” explains James. “We had decided she would come over here, but things were worse in Spain. We also realised that we were both quite concerned about our families. We made the tough decision to see how things would unfold, and then the borders closed.

“At the start we tried to process what was going on and staying positive, and tried to find ways to stay connected with each other,” James adds. “We worked on the English translation of her book together, which was something nice to do. We tried to keep each other informed of each other’s lives.”

James started each morning sending Celia at WhatsApp message with a memory of a past adventure.

“It gives us a chance to focus our attention on something together, and turn the conversation away from news cycles and the daily anxieties of life,” he says.

James and Celia reunited last month, and both moved into a cottage in Portmarnock, not far from James’ parents in Sutton.

On being reunited, James says: “We put so much time into ‘what’s is going to be like?’ that we found ourselves standing in the airport feeling really strange. I kept saying, ‘I didn’t think you’d ever get here’. Suddenly we were back in a committed relationship 24 hours a day, and I think our expectations took some adjusting. Like all relationships, there were arguments and stress – we thought things would be perfect in our mind. Once we allowed ourselves to relax, I think we found things better.”