The son of Russian Jewish immigrants, he remained an activist to his death at age 103 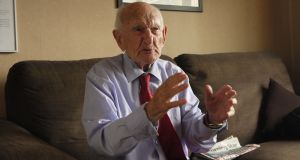 The death has taken place of 103-year-old Dubliner Max Levitas, a veteran Jewish communist, and an anti-racist activist until the very end of his life. His parents were Jewish immigrants to Dublin, escaping the virulent anti-Semitism of the Tsarist Russian Empire. Harry (Hillel) Levitas hailed from the Lithuanian shtetl of Akmeyan, while Leah Rick hailed from the Latvian capital of Riga. They were married in August 1914 in a synagogue then located at 52 Lower Camden Street, now the the Dublin HQ of Concern Worldwide. Also located in the same building was the HQ of the International Tailors, Machinists and Pressers Trade Union, known in Dublinese as the “Jewish Union”, and of which Harry, a tailor’s presser, was an activist member. When Max was invited back to Dublin to unveil a memorial plaque in June 2002, he delighted in the building being described as “Jerusalem on one floor, and the New Jerusalem on another”.

The eldest of six siblings, Max Samuel Levitas – Motl Shmuel ben Hillel – was born in June 1915 at 15 Longwood Avenue in the South Circular Road, Portobello area of Dublin, then known colloquially as “Little Jerusalem”. A year later, the family moved as sub-tenants to an artisan dwelling at 8 Warren Street, where his brother Maurice, later an International Brigade volunteer in the Spanish anti-Fascist war, would be born in February 1917. Situated directly across the Grand Canal from Portobello Barracks, the area was the scene of numerous gun battles during both the War of Independence and the Civil War, of which Max had vivid childhood memories. But there was no doubt about where the family stood. “We’re voting for Sinn Féin!” as Harry Levitas would inform Leah.

The family attended Lennox Street synagogue, just around the corner from their home. One Saturday in the mid-1920s the synagogue nearly went up in smoke. It was not, however, attempted arson. Four playmates had been anxious to bring the Sabbath to a speedy conclusion in order to resume playing on the street. So they came back into the synagogue to hastily say the final prayers, and accidentally knocked over a candle which set a cloth alight, fortunately quickly extinguished. The “culprits” were three brothers – Max, Maurice and Sol Levitas – and Chaim Herzog, a future president of Israel and son of Yitzhak Herzog, the first chief rabbi of Ireland.

In March 1923 a terrible tragedy befell the family when Max’s 12-month-old brother Isaac died following a domestic accident. Poverty also dogged the family as they were forced to move yet again in 1925, to become one-room sub-tenants in a house at St Kevin’s Parade. A union activist who had gone on strike against sweatshop working conditions, Harry Levitas found himself blacklisted, not least because of his declared communist sympathies. Attempts to earn a living as a pedlar, travelling the length and breadth of the Irish countryside, also proved ultimately unsuccessful. So the family were compelled to emigrate to Glasgow in 1927.

This brought an end to the formal education of 12-year-old Max, who had attended St Peter’s Church of Ireland National School. Thereafter he was educated in the university of life, especially when the family made a final move to settle in the East End of London. Max became a tailor, union activist and shop steward. He had already joined the Young Communist League while in Glasgow, and he would remain dedicated to his communist convictions to the very end of his life. In 1934 Max was convicted for writing anti-Fascist slogans on Nelson’s Column in Trafalgar Square, and was attacked by name by the leader of the British Union of Fascists, Sir Oswald Mosley.

Max also participated in the October 1936 battle of Cable Street, when Mosley’s Fascists were prevented from marching through the East End by its Jewish residents, aided by Irish dock workers from neighbouring areas – a particular source of pride for Max, who always affirmed both his Irish and Jewish roots.

Now a member of the Communist Party itself, Max led a successful rent strike in Stepney in 1937. He would also be among the leaders of a September 1940 occupation of the Savoy Hotel’s deep shelters, which forced the authorities to open up London Underground stations as bomb shelters during the second World War.

In 1941, determined to see the defeat of Nazi Germany, Max volunteered for combat in the British Army. But his military career was short-lived. “I was ‘invalided’ out,” was how Max described the euphemistic language used by his superiors in dismissing him for punching a British Army officer. A court martial was deemed undesirable, as it would have revealed that Max had punched the officer for addressing him as “a dirty Jew”. It was a case of literally having to strike a blow against anti-Semitism on the Home Front itself. The end of the War in 1945 saw London East Enders elect the Communist Party’s Phil Piratin as MP, while 10 CP candidates were elected to Stepney Borough Council, including Max, who served on the Council until 1971.

For the last four decades of his life, Max lived in a Council flat on Whitechapel’s Sidney Street. By this time it was an area of immigration from Bangladesh. Max shared as much in their struggles against the racism that he had fought in the 1930s, particularly with his participation in the protest to prevent a provocative march by the anti-immigrant English Defence League in 2013. Max’s last public speech, at the age of 101, was delivered at the battle of Cable Street 80th anniversary celebrations in October 2016, when he shared a platform with British Labour Party leader Jeremy Corbyn, who stated in his Jewish Chronicle tribute: “Max’s family put it best after his death: ‘No Pasarán, and with Max they never did.’ The world is a better place because of my friend Max Levitas.”

Max had been predeceased by his wife Sadie in 1988 and son Stephen in 2014, and he was laid to rest alongside Sadie in Rainham Jewish Cemetery. Yet Max had never forgotten where he came from. For the past 30 years he was a frequent visitor to his native Dublin. Such visits had their poignant side, particularly his annual attendance at Holocaust Memorial Day ceremonies, where on one occasion he had been requested to light a candle in memory of the political victims of the Holocaust. But Max also had a host of family victims to remember. His mother’s sister Rachel perished with all her family in Riga, with the exception of one daughter who had emigrated to Palestine, and one son fighting in the ranks of the Red Army. His father’s sister Sara perished with all her family in Akmeyan. And in Paris, his father’s brother, Elie Leyb Levitetz, was another victim of the war.

Max’s visits to Dublin were, however, primarily joyful occasions, particularly his 2016 centenary return, when he was also received in the Mansion House by lord mayor Críona Ní Dhálaigh. He had already received warm greetings on his 100th birthday from the President of Ireland, Michael D Higgins. On his passing, President Higgins further pronounced: “I have heard with great sorrow of the passing of Max Levitas, anti-fascist and defender of democracy and its core values. Proud of his Irish and his Jewish roots, Max Levitas was a citizen of the world, and a person of immense courage and great humanity.”