‘I’m a Christmas killjoy. Time to bite down hard on my baubles and get on with it’ 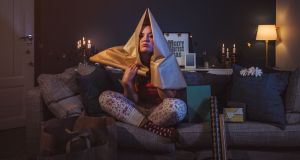 Are you a Christmas killjoy? Welcome to the club. Photograph: iStock

Only 10 more sleeps until Santa Claus breaks into your home, eats your organic carrots and leaves his slushy footprints all over your hand-knotted rug, eh?

Look, I’m not the most Christmassy person you’re going to fall over at the sausage-meat counter; however, as a citizen of a country awash with dreadful acrylic festive jumpers, I feel patriotically compelled to bite down hard on my baubles and get on with it.

Yep, like it or loathe it, the Yuletide season is fully upon us. You can tell by the herds of LED reindeers galloping across suburban house fronts and by all those harassed-looking drivers glaring through their windscreens at the lines of SUVs snaking into shopping centres, their windows and grills infested with grubby felt antlers and red noses. Whatever about getting into a car park at all in mid-December, trying to negotiate one’s way back out again through a pack of vehicles disguised as animals is not dissimilar to being crushed to death in a pen of giant cattle.

I’m pretty sure I would be a less curmudgeonly and more compliant Christmas reveller if there was no such thing as shopping. I know I’m not alone in feeling like drowning myself in a gin bath when I see tired children roaming the supermarket aisles, looking longingly at mass-produced Christmas stockings and other products packed with non-biodegradable plastics that will keep the little poppets amused for 10 minutes (while you’re sloshing half a bottle of plonk into yourself and the gravy) but will still be choking the oceans by the time those children have children of their own.

Sorry, I should probably apologise at this point for being such a killjoy. Obviously the Christmas fairy forgot to wave her environmentally friendly wand over my grisly crib.

In all seriousness though, I have genuinely found Christmas a difficult, occasionally overwhelming time of year, and I mention it (yet again) because I know I’m not the only one with those feelings. Research is hazy: I read somewhere that more men dislike Christmas than women, and that people in their 60s dislike it more than their younger brethren; I also read that animus towards the season is all about childhood experiences and associations. One interesting (to me anyway) study suggested, however, that our feelings can change, that antipathy can become acceptance, that seasonal anxiety can be replaced by an ease with proceedings that sets in like a twinkling frost.

And it’s true that I feel better about Christmas than I used to. I’ve lowered my expectations. I don’t pore over magazine shoots featuring decorative families grinning through their orthodontistry at a well-bronzed bird. I’ve stopped comparing myself to friends who seem to get it all just right, and have the photographic evidence to prove it. I find it easier now that my children are older and mainly just want sleep and money. I no longer lie in the bath as Christmas Day dawns, paralysed with a sense of impending failure. And while I’ve always known that the perfect Nollaig is a myth, I now let myself proceed according to that knowledge.

As for shopping, I’d rather poke my eyes out with a cocktail sausage stick than go into the sales on St Stephen’s Day.

Anyway, at this stage I’m grateful simply to be in a position to put a bird on a table I can call my own. I’ll nick a bit of holly out of someone’s garden, stick a few candles around the place, throw the cat a couple of giblets, and lay off the gin until the bird is in the oven, and after that, well . . .

“Are you all ready for Christmas?” an acquaintance asked me recently when I bumped into her coming out of a fish shop on the harbour. I looked beyond her at the view, it was late afternoon; the sky was rocking, pounding out purple clouds against great swathes of grey, while the trawlers bobbed around in the black water, their masts and rigging illuminated by Christmas lights.