Irish Times picks of the year: From the pope’s visit to young protesters 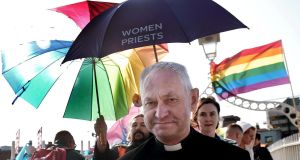 A deacon in the Estonian Evangelical Lutheran Church walks across the Ha’penny Bridge in Dublin through a group of protesters. Photograph: Ray Lohan

A priest walks across the Ha’penny Bridge in Dublin (above) through a group of protesters from We Are Church Ireland – a group that seeks the ordination of women priests – members of the LGBTQI community, and survivors of clerical sex abuse in Dublin in August, ahead of the visit of Pope Francis.

Candles sit in bowls of water (below) as Women’s Aid calls for a review of domestic killings in November. The Femicide Watch 2018 report revealed that nine in 10 women murdered in Ireland are killed by a man they know. In the photograph, multiple candles in a single bowl represent families who were killed.

Cezy Focsa with Gracie McIntyre in February. The girls have a rare inherited degenerative disease called Morquio syndrome. They spent the day outside the Dáil trying to meet Minister for Health Simon Harris TD, to urge him to continue funding the life-changing drug Vimizim, which is manufactured in Cork.

On the beach in Skerries, Co Dublin, some of the thousands of people throughout Ireland, and worldwide, who took part in the annual Darkness into Light walks and runs to raise awareness of suicide, self-harm and mental health.

Dorian and Julian Browne, nephews of Garech Browne – art collector, patron of the arts and Guinness heir – scatter their late uncle’s ashes at Luggala in Co Wicklow in August.

Jenny Attridge from Bantry, in Co Cork, arrives for a gala dinner at the Mansion House, which was part of Dublin Honours Magdalenes, a two-day event in June.