Jennifer O’Connell: I’m so confused about tipping I can never eat out again

Generally I just close my eyes and fling twenties around, and hope no one is insulted 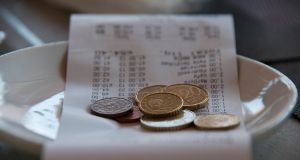 Naively, I thought all tips, card or cash, went to the staff. Photograph: Getty Images

A friend told me recently about an experience she’d had eating out in the US. Running low on change, she had left a relatively modest tip, and found herself berated by an angry server.

“You’ve been tip-shamed,” I told her.

I know all about tip-shaming, because I used to be the queen of it. Back in the 1990s, I spent my J-1 summer in a nameless (for reasons that will shortly become apparent) town near Cape Cod, where I had a job in a lobster shack.

I actually had two jobs that summer: the other involved sitting in the darkened back room of a Christmas shop, replacing “Made in Taiwan” stickers on baubles with handwritten “Made in the Nameless Town Near Cape Cod” ones. If there are more depressing things in this life than spending a glorious east coast summer listening to Christmas carols, while carrying out probable misdemeanours in contravention of the 1930 Tariff Act for five bucks an hour, I don’t want to know about them. I consoled myself by working out how long it would be before a Christmas shop in a summer holiday resort went out of business. Quite a long time, it turns out.

The job in the lobster shack, which took the “shack” part of its title literally, was better. I was the hostess, which meant spending my shift taking bookings, managing tables, preparing bills, and assisting the sous-chef in knocking back illicit bottles of Nantucket Nectar laced with rum. And, of course, tip-shaming when required.

Tip-shaming was what happened when a server was unhappy with the size of the tip they’d been left. My job was to follow the customer out on to the street and ask them if they’d enjoyed their meal, and if there was a problem with the service. Quite often, there was: they might have seen their lobster slide off the tray on to the floor, and watched the server pick it up, wipe it on their shirt, and put it right back on the plate, for example. That kind of thing happened. But, as far as we were concerned, and as far as I told them, that was no excuse to be tight. We were in Clinton-era America, and tips were a fundamental human right.

As I was often half-wasted (this was before Political Correctness Gone Mad ruined drinking at work), it didn’t feel as undignified as it now sounds. “Go after her, girl,” the server would holler, and off I’d go to collect the missing tip, like Grumpy the Revenue Inspector Dwarf. Yelling at strangers I knew I’d never meet again was strangely empowering. And this was years before Twitter tried to monetise it.

These days tipping is a much, much more fraught affair. I thought about this when I read revelations in this newspaper about the tipping controversy at the Ivy restaurant in Dublin. Members of staff there told my colleague Deirdre Falvey they had been promised 40 per cent of card tips but didn’t always get it.

Naively, until I read it, I thought all tips, card or cash, went to the staff. I’m so confused now, I don’t think I can ever eat out again.

In terms of its potential for awkwardness, tipping was already up there with knowing how much to pay the babysitter on a night where you’ve arrived home two hours late, with a dead mobile, only to discover that the middle child projectile vomited from the top bunk and the babysitter has already cleaned it up, showered the child, and is currently resewing the hem on a school uniform, while teaching the baby Mandarin. Or knowing how much to put into your partner’s godchild’s sister’s Confirmation envelope.

If you’re reading this, shouting “€80 in the first instance and €20 in the second! Like, duh!” congratulations. You’re one of the chosen few who came out of the uterus with certainty in these matters. The rest of us are walking around in various shades of confused and mortified. I expected to wake up one day, ideally not long after my 30th birthday, with a giant spreadsheet in my head, featuring columns for taxi drivers, hairdressers, hotel staff, Communions and wedding presents, and suggested amounts for every possible scenario. It never happened, so instead I just close my eyes and fling twenties around, and hope no one is insulted.

There is something to be said for the American approach to tipping. There, at least, everyone knows where they stand. It goes like this: unless the server physically assaults you, you tip 15 per cent – yes, even if you saw them pick your dinner up off the floor and wipe it on their shirt. If they smile even once, it’s 20 per cent. If you try and get away with less, you risk being shouted at in the middle of the street.

I googled the Christmas shop just now, and it’s still in business, although under new management selling what I’m sure are genuine Cape Cod ornaments for up to $60 apiece. So is the lobster shack, getting the kind of reviews it would have got in my day if, God forbid, the internet had been around. The wait staff are probably still getting great tips too.