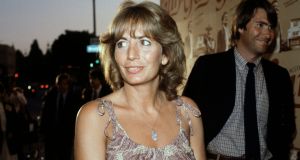 Penny Marshall, the nasal-voiced co-star of the slapstick sitcom Laverne & Shirley and later the chronically self-deprecating director of hit films such as Big and A League of Their Own, died Monday at her home in Los Angeles. She was 75.

Her publicist, Michelle Bega, said the cause was complications of diabetes. Marshall had in recent years been treated for lung cancer, discovered in 2009, and a brain tumour. She announced in 2013 that the cancer was in remission.

Marshall became the first woman to direct a feature film that grossed more than $100 million when she made Big (1988). That movie, a comedy about a 12-year-old boy who magically turns into an adult (Tom Hanks) and then has to navigate the grown-up world, was as popular with critics as with audiences.

Four years later she repeated her box-office success with A League of Their Own, a sentimentally spunky comedy about a wartime women’s baseball league with an ensemble cast that included Madonna, Geena Davis, Rosie O’Donnell and Hanks.

Marshall had a reputation for instinctive directing, which could mean endless retakes. But she was also known for treating film-making as a team effort rather than a dictatorship

In between, she directed Awakenings (1990), a medical drama starring Robert De Niro as a patient coming out of an encephalitic trance and Robin Williams as the neurologist who helps him. Awakenings, based on a book by Oliver Sacks, was only moderately successful financially, but De Niro received an Academy Award nomination.

A writer for Cosmopolitan magazine once commented that Marshall “got into directing the ‘easy’ way – by becoming a television superstar first”. That was a reference to her seven seasons (1976-83) as Laverne DeFazio, the brasher (yet possibly more vulnerable) of two young room-mates, brewery assembly-line workers, on the hit ABC comedy series Laverne & Shirley, set in 1950s and 1960s Milwaukee.

In Hollywood, Marshall had a reputation for instinctive directing, which could mean endless retakes. But she was also known for treating film-making as a team effort rather than a dictatorship.

That may or may not have been a function of her self-effacing personality, which colleagues and interviewers often commented on. But in 1992 Marshall confessed to The New York Times Magazine that she wasn’t completely guileless.

“I have my own way of functioning,” she said. “My personality is, I whine. It’s how I feel inside. I guess it’s how I use being female, too. I touch a lot to get my way and say, ‘Pleeease, do it over here.’ So it can be an advantage – the anti-director.”

That attitude was also an essential aspect of her humour. When Vanity Fair asked her to identify her greatest regret, she said, “That when I was a size 0, there was no size 0.”

Carole Penny Marshall was born on October 15th, 1943, in the Bronx, New York, and grew up there, at the northern end of the Grand Concourse. Her father, Anthony, was an industrial film-maker, and her mother, Marjorie (Ward) Marshall, taught dance. The family name had been changed from Masciarelli.

After she graduated from Walton High School, in the Kingsbridge section of the Bronx, Marshall attended the University of New Mexico. There she met and married Michael Henry, a college football player. They had a daughter, but the marriage lasted only two years, and Marshall headed for California, where her older brother, Garry, had become a successful comedy writer.

She made her film debut in The Savage Seven, a 1968 biker-gang drama, and had a small part the same year in How Sweet It Is!, a romantic comedy starring Debbie Reynolds and James Garner.

Marshall continued acting, mostly playing guest roles on television series, until she got her big break in 1971, when she was cast in the recurring part of Jack Klugman’s gloomy secretary, Myrna Turner, on the ABC sitcom The Odd Couple. Her brother, a producer of the show, got her the job, but nepotism had nothing to do with it when viewers fell in love with her poker-faced humour and Bronx-accented whine.

That same year she married Rob Reiner, who was then a star of the hit series All in the Family. He adopted her daughter, but they divorced in 1979, when Laverne & Shirley and Marshall were at the height of their television popularity.

That series grew out of a 1975 episode of Happy Days, in which Laverne (Marshall) and Shirley Feeney (Cindy Williams), two fast blue-collar girls, turned up at the local hangout as blind dates for Richie Cunningham and Fonzie, the two lead characters.

When Laverne & Shirley ended in 1983, after considerable on-set conflict between the co-stars and a final season without Williams, it was the first time in 12 years that Marshall had not had at least a relatively steady job on a television series.

She began making a handful of films and television appearances. Then Whoopi Goldberg, a friend, asked her to take over for a director she wasn’t getting along with on Jumpin’ Jack Flash (1986), a comic spy caper. (Marshall had directed a few episodes of Laverne & Shirley.) The movie was far from an unqualified success, but it led to Big.

Marshall’s two films after A League of Their Own were not as well received. Renaissance Man (1994), starring Danny DeVito as an adman turned teacher of army recruits, was savaged by critics and earned only about $24 million, considerably less than it cost to make, in the United States (in contrast, Big earned almost $115 million). The Preacher’s Wife (1996), a remake of the heartwarming 1947 fantasy romance The Bishop’s Wife, starred Denzel Washington and Whitney Houston. Critics found it likable but weak, and it brought in just under $50 million domestically.

Marshall did not direct again until 2001. Riding in Cars With Boys, a saga of teenage motherhood starring Drew Barrymore, earned mostly positive reviews but was a box-office disappointment. It was the last film Marshall directed. Her farewell to television direction was a 2011 episode of the multiple-personalities series United States of Tara.

In 2012 she published a best-selling memoir, My Mother Was Nuts, which began in her characteristically self-effacing way: “I’m not someone who’s had to deal with much personal drama outside of the usual: growing up with parents who hated each other, two marriages and divorces, the ups and downs of various relationships, raising a daughter and watching friends crack up and overdose. There was the cancer thing, too. As you can see, though, there’s nothing out of the ordinary, nothing that most people don’t go through, nothing that says, ‘Penny, you were lucky to get through that one.’”

Marshall, who lived in the Hollywood Hills section of Los Angeles, is survived by her older sister, Ronny; a daughter, actress Tracy Reiner; and three grandchildren.