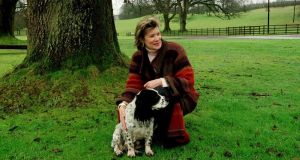 Sacha Hamilton, Duchess of Abercorn, regarded her formal title as a means of opening doors for the public good. Photograph: Trevor McBride

Sacha Hamilton, Duchess of Abercorn, who has died in London after a long illness, was an aristocrat driven by a sense of social responsibility. American-born and English-raised, she made major contributions to the life of her adopted home of Ireland.

Her biggest single contribution was the Pushkin Trust, which promotes creative writing in schools. It was named after her Russian ancestor, writer Alexander Pushkin.

She was inspired to establish the trust in 1988, when the Troubles seemed never-ending. It would allow children to express themselves, as a release from hurt. Between 45,000 and 50,000 children have taken part, in 28 of Ireland’s counties. She was a hands-on patron, visiting every school involved. She had a way of making every participating child feel their work was valuable. From its inception, she insisted on the trust’s work being cross-community and cross-Border. One of its projects is to bring teachers and children on residential retreats, with she making the family estate in Tyrone available.

She had Pushkin House built there, modelled on a Russian dacha. She insisted on a hearth being included, to facilitate Ireland’s ‘fifth province’ of the imagination.

Another of her contributions was being a trustee of the Northern Ireland Centre for Trauma and Transformation, established after the Omagh bombing of August 1998. She was also a patron of the Omagh Community Youth Choir, established after the bomb. Hearing an early rehearsal, she declared them a tonic for the soul whose message of peace had to get out.

Her compassion was hands-on. After the Omagh bombing she visited as many of victims as she could to express sympathy.

Before then, from the late 1980s, she developed a friendship with the Benedictine Abbey at Glenstal, Co Limerick. Initially, the monks’ collection or Russian icons attracted her. A close relationship was cemented because she found kindred spirits, who shared her belief that the education had to encourage the imagination.

Yet another project she commissioned was the book Nearness of Ice: the Arctic Convoys recounting the memories of Northern seamen who served on second World War convoys bringing supplies to the then Soviet Union.

She was born Alexandra Anastasia Philips in Tucson, Arizona, in February 1946, eldest of five children to Harold Pedro Joseph Philips, a lieutenant-colonel in the British army, and his wife, Georgina (née Wernher). So numerous were her mother’s relatives among royalty and aristocracy that she was described as “one of the best-connected women in the country”. She was descended from Pushkin, and related to Russia’s Romanov dynasty and the British royal family.

During her childhood, the family lived in Leicestershire. She was educated first at a private school there; a public school for girls in Oxfordshire; and a London secretarial college.

Trained as a counsellor

In 1966 she married James Marquess of Hamilton (later Duke of Abercorn), then unionist MP at Westminster for Fermanagh and South Tyrone. The Abercorns were known as fair landlords, firmly on the liberal wing of unionism. The couple initially lived in London, During her London years she trained as a counsellor, and developed a strong interest in the ideas of Swiss psychologist Carl Jung. In the mid-1970s the couple moved to the Abercorns’ family seat at Baronscourt, near Newtownstewart in Co Tyrone.

In person, she insisted on being called Sacha, rather than her formal title which she regarded as a means of opening doors for the public good. Her informality contributed to her ability to connect with people of all backgrounds. She was extraordinarily well read, and could often bring an unexpected insight to a conversation. Above all, she was hospitable and generous.

She is survived by her husband, James; her daughter Sophia; her sons James and Nicholas; and her sisters Fiona, Marita and Natalia. She was predecased by her brother Nicholas.