Ross O'Carroll-Kelly: If we hadn’t been friends for 20 years, she would have called the Gords 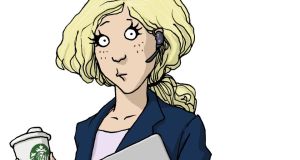 It’s not everyone who suits a hat, although I’m happy to say that I’ve always been able to carry one off? I’m actually admiring my white trilby in the full-length mirror in our bedroom when Sorcha walks in behind me looking seriously troubled about something.

She’s possibly nervous about the porty. Yeah, no, we’re supposed to be hosting a Goys and Dolls fancy dress bash on New Year’s Eve with 150 people invited. It’s the first time in years that we’ve had an actual porty in Honalee and she obviously wants it to go well.

I tip my hat so that it’s suddenly at an angle. “I know this is going to sound possibly big-headed,” I go, “but I look genuinely great in this hat.”

She doesn’t respond. And that’s when I begin to suspect that something is possibly wrong.

Yeah, no, Croia was one of her mates from her UCD days – and her Vice-Captain on the Irish Debating Team.

I’m there, “Is she coming to the porty?” hoping that the answer is no.

Which is true. She’s like a tut in human form.

I’m there, “Am I missing something here?”

“She’s actually right, Ross. Firstly, to refer to women as ‘dolls’ is grossly offensive. And secondly, the classification of people into two distinct, opposite and disconnected forms enforces the notion that gender is a binary issue. And that’s even more offensive?”

“Do you not think you’re maybe overthinking this, Sorcha?”

“No, Ross, I’ve been under-thinking it. That’s the whole point. Croia actually called me a gender binarist! She said if we hadn’t been friends for 20 years, she would have called the Gords.”

“Jesus, I hope they’ve got better things to do than break up New Year porties before they actually happen.”

“Oh my God, I’m storting to wonder is that why Lauren and Amie with an ie said they couldn’t come?”

“I thought they both had babysitter issues?”

“Well, none of my friends had an issue with the whole Goys and Dolls thing.”

“Yeah, your friends aren’t exactly switched on to issues of political correctness, Ross – no offence. You know what we’re going to have to do, don’t you?”

“Please don’t say cancel the porty – look how well I look in the hat!”

“We’re going to have to email everyone to tell them that the theme has changed.”

Two minutes later, she’s sitting on the edge of the bed with her laptop balanced on her knees, going, “I can’t believe Croia called me a gender binarist, even though I definitely deserved it. Okay, let’s see what we can come up in terms of a theme that offends absolutely nobody.”

“Okay, I’m going to pretend I didn’t hear that. Actually, do you know what, let’s not suggest a theme. It’s too restrictive. Let’s just call it a fancy dress porty but tell all of our guests that they must take individual responsibility to ensure that their costumes aren’t offensive, discriminatory or prejudiced in respect of race, gender, disability or sexual orientation – or based on stereotypes.”

“We could always cancel it and say we’ve got an issue with our plumbing.”

“Don’t be silly, Ross. People shouldn’t be frightened by this stuff. It’s just an email, gently reminding our guests that they should abide by certain dress guidelines, which I’m happy to provide for them.”

“Just don’t make it sound like a solicitor’s letter, though.”

“Okay, obviously we don’t want any costumes with historical or religious themes that might cause offence. So no cowboys and Native Americans. No soldiers. No Crusaders. No terrorists. No priests. No nuns. No monks. No rabbis. No angels. No devils. And definitely no Prophet Mohammed. Then, on top of that, we obviously don’t want any outfits that transgress the rules in relation to cultural appropriation.”

“What does that mean?”

“It’s where a privileged community mines the traditions or cultural symbols of usually marginalised people without permission or regard for the consequences – and in this context for comedic effect. So no Geisha girls. No Mexican bandits. No Cleopatras. No Moanas. No Pocahontases. No Sinbads. No rappers or hip hop ortists. No Russian hats. No berets. No fezzes. No hula skirts. And no kilts, unless the wearer is actually Scottish, which I know for a fact none of your friends are.”

“There’s a lot of stuff that’s suddenly offensive, isn’t there?”

“Oh, thanks for reminding me. We don’t want anyone dressing in a way that validates the idea of a causal link between ‘whiteness’ and beauty or power. So no Cinderella. No Snow White. No Sleeping Beauty. No Aurora. No Elsa. No Rapunzel.”

She’s like, “Oh my God, I read an amazing piece in the Gordian online about anthropomorphism and how it’s actually not cool anymore. So no costumes that attribute human qualities, emotions or motivations to non-human entities. So Mickey Mouse. No Minnie Mouse. No Donald Duck. No Winnie the Pooh. No Tigger. No Cheshire Cat. No White Rabbit. And obviously no Mad Hatter because it stigmatises important issues relating to mental health.”

By the time she’s finished, the email is 4,500 words long and she’s so tired that her eyes are already closing.

“Sorcha,” I go, “will we just tell people we have a problem with the plumbing?”

“Yes,” she goes, just before falling asleep, “let’s just do that.”

‘I actually didn’t know Ireland existed. But I read about it and knew it was perfect for me’
6