Life of a gay migrant: Racism exists in the LGBT community too 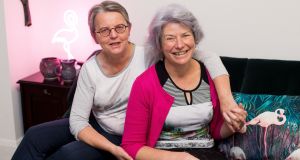 Ireland may be known as the land of  céad míle fáilte, but a report in the last months of 2018 suggests more needs to be done to make it a welcoming place for LGBT migrants.

Far From Home: Life as an LGBT Migrant in Ireland, published in November by non-profit organisation the National LGBT Federation, surveyed 231 LGBT migrants from 48 different countries.

The largest percentage of participants came from Brazil, the US, the UK, Poland and Germany. Most people identified as cisgender, with 20 participants identifying as transgender. Twelve people living in direct provision took part in the survey.

Some of the key recommendations made in the report include LGBT sensitivity training for those working in immigration, better access to LGBT services in rural areas, more platforms for migrants within the LGBT community and the introduction of hate crime legislation.

There were also calls for improved healthcare, in particular mental health services, with over half of all participants rating their mental health negatively, and an end to the current direct provision system.

Nerilee Ceatha (50), an LGBT migrant from New Zealand, took part in the survey as well as initial workshops to design the research. A social worker by profession, she first came to Ireland in 2000 to be with her Irish partner, Barbara.

“I think as soon as I open my mouth, people are aware that I’m not from here,” she says. “So it’s often commented on, and there’s an assumption I must be here visiting. It doesn’t matter how long I’ve lived here, that’s always the opening question.”

More than half of those surveyed in the report said they “do not feel that they are included in Irish society”. But Ceatha says that is not her personal experience.

“The racism and homophobia that exists structurally within the immigration system has probably been the biggest negative experience for me.

“But I do feel that my home is here. I feel very included in the neighbourhood that I live in. I feel included in terms of my social work profession and academic networks, and within the LGBT community.”

One of Ceatha’s pastimes is running with Dublin Front Runners, an LGBT running club set up in 2005 with more than 200 members. “When I first came along, the club was mostly gay men, and they were really quite fabulous at taking me under their wing, because there weren’t very many women running with the club at that time.”

However, she is quick to point out that Ireland might not feel quite as welcoming to others. “I’m very conscious that in the report people have spoken about racism that they’ve experienced across the board. That’s really disappointing. The LGBT community aren’t perfect either. We’ve still got work to do.”

Two-thirds of survey participants reported facing discrimination in Ireland due to their ethnicity or migrant status. Over a quarter said they had been treated poorly in LGBT spaces because of how they spoke English or talked. Three-fifths said they didn’t feel connected to the LGBT community in Ireland at all.

Asylum seekers are some of the most resourceful people, who have had to come from horrific situations and have managed to actually flee them

Similar to the report’s authors, Ceatha is also concerned about the isolating effects of direct provision on LGBT migrants.

“Asylum seekers are some of the most resourceful people, who have had to come from horrific situations and have managed to actually flee them. They have a huge contribution to make, and instead we have people in the depths of nowhere, unable to make that contribution. It’s really just taking away their humanity.”

Delroy Zimiso Mpofu (28) is a transgender asylum seeker from Zimbabwe. He came to Ireland in October last year and lives in the Mosney accommodation centre in Co Meath.

“If there’s one thing that’s very painful about living in a direct provision centre as a trans or LGBT person, it’s that when you walk round everyone points fingers at you,” he says. “Especially with me, because I don’t have many physical changes. Mainly just my voice has gone deep, dropped a bit. But everything else hasn’t changed much.”

Mpofu is on a two-year waiting list for an appointment at Loughlinstown’s gender clinic – the only adult clinic of its kind in the country. In the meantime, he has been self-medicating using hormones from the Netherlands.

But he is concerned about the effects of unregulated hormones on his body: “I really feel like I have an imbalance of hormones, like I’m not taking the right dose.”

While living at the Balseskin reception centre in Finglas, Mpofu was able to see a psychiatrist “every two or three weeks” to discuss his gender dysphoria. However, since relocating to Mosney last September, he has been waiting to be transferred to a new mental health professional. He says he misses the regular support the therapy sessions offered.

Mpofu is also a member of a transgender support group at Outhouse, an LGBT community centre in Dublin. Although a weekly allowance of just €21.60 a week makes regular attendance impossible.

“I’d go more often, except for challenges with transport from here to there,” he says.

“There isn’t enough support. For instance, there’s only one group that supports LGBT asylum seekers and refugees. They give us transport money to try to cater for us, but they can’t cover everything on their own. It’s like we’re being excluded.”

Diego Rodrigues Caixeta (33) arrived in Dublin from Brazil on a student visa back in 2010.

A qualified nurse, he quickly found work as a healthcare assistant in hospitals and nursing homes across Dublin.

“It helped me to improve my English faster than I’d expected. Also, as I worked mainly with elderly people, I had the opportunity to learn about Ireland and Irish culture from a unique perspective.”

In 2012, he was offered a role at the Gay Men’s Health Service (GMHS) in Baggot Street, where he works as a sexual health outreach worker.

“Everything is free, and we try to be as inclusive as we can. All our leaflets are in English, Portuguese and Spanish. Brazilians are the second-biggest nationality going to the clinic after Irish people. If they need translations, I’m there and can help them.”

The GMHS is the only sexual health clinic specifically for the gay and transgender community in the country. “We get people coming from Donegal to see us because they’re ashamed to be seen where they live,” he says. “They wouldn’t go to their GP to talk about their sexual life because they’re gay, and they feel scared, so they come to Dublin.”

Caixeta feels well integrated within Irish society – even more so with his newfound passion for the fiddle. “I saw all the musicians just playing for joy, laughing and drinking. And I was like, ‘I want to be part of that’.”

He says he has never experienced any prejudice travelling around rural Ireland or on the trad scene.

“There’s a stigma around being gay in the countryside. But I’ve personally never really suffered anything. I’ve had two really homophobic experiences, and they both happened in Dublin.”

He recalls one incident when he was on the way home from the gym with two gay friends. “They were holding hands, and these two guys stopped us. They said, ‘Why are you doing that? Stop displaying affection in public, it’s wrong.’

“One started getting really aggressive and said, ‘If you want to do that go back to your country. You can do that there – don’t do it here.’ I told him what he was doing was shameful, and he threatened to punch me.”

Caixeta agrees with the report’s recommendation that hate crime legislation be introduced in Ireland.

However, generally speaking, he says he has had only positive experiences here. “I do think Irish people are very friendly, they’re very open. I don’t know if it’s because it’s a small country.

“It can be homogenous in a way, so that instigates Irish people’s curiosity. It opens up a conversation and you can end up having this huge, beautiful friendship. Luckily, I’m privileged to have had that here.”