It was a year of visits, royal, papal, meteorological. Here’s what we learned from them 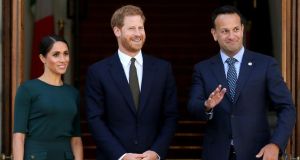 Taoiseach Leo Varadkar with Harry and Meghan at the start of their two-day visit. Photograph: Paul Faith/AFP/Getty

It was a year of memorable visits: royal, papal and meteorological. Here’s how they went down, and what we learned from them.

Emma and the Beast

The first high-profile visitor was Storm Emma, the fractious pantomime dame who flounced across our skies in March.

A twin whammy of unusual meteorological events meant that Storm Emma arrived from the west, at the same moment a polar vortex came in from Siberia, the “Beast from the East”. The collision of the two resulted in heavy snowfall and blizzards.

The storms hit with full force on March 1st, when the National Emergency Co-ordination Group issued a curfew instructing everyone to stay home from 4pm, and eat their body weight in toast. At least, that was what we took from it.

In the days that followed, people went skiing in Tramore, Co Waterford, snowboarding on Patrick’s Hill in Cork, and stampeding for bread anywhere there was a Centra or Spar. “How to build an igloo” and “how to bleed a radiator” were among the top searches on Google.

What we learned A previously undiagnosed facet of the Irish condition is intense separation anxiety at the prospect of a spell without bread.

Prince Charles and Camilla, Duchess of Cornwall, spent a couple of days touring Cork and Kerry in June, where they got to sip fermented rainwater in the English market, stroll on Derrynane beach, and shake hands with Martin Ferris. “He was nicer than I thought he’d be,” a woman called Fiona, who met him in Cork harbour, said, summing up the mood of a nation.

What we learned Royals wear tights even while walking barefoot on the beach.

Prince Charles may be the heir apparent to the British throne, the eldest child of Queen Elizabeth, the Prince of Wales, Duke of Cornwall and the Duke of Rothesay all rolled into one, but everyone knew he and Camilla were really just a warm-up act, the Aerosmith to Harry and Meghan’s Guns’n’Roses.

Harry and Meghan came to Dublin in July, their first overseas trip as a married couple.

There was a garden party at the British Ambassador to Ireland’s residence in Glencairn, Sandyford, to which many of Ireland’s coolest people were invited, and singularly failed to live up to that description, gurning in the face of all that royal charisma like Popeye on ecstasy. But we could forgive them because, well, it’s Harry and Meghan.

What we learned There’s a slight chance Harry and Meghan’s baby could have been conceived in Dublin.

Three months after the country was knee-deep in snow, a startling yellow orb took up position in the sky, and stayed there for weeks and weeks. As the mercury hit 32 degrees in Shannon, the roads literally melted between Rathangan and Clonbullogue in Co Offaly, Lidl’s 7,500 backyard swimming pools sold out, and even the fish were in distress. A gorse fire on Bray head revealed an old ‘EIRE’ sign from the second World War.

What we learned It’s a good thing we don’t have summer every year. We’re not able for it.

All sorts of things were blamed for the relatively low numbers – about 130,000 – who turned out to see Pope Francis in the Phoenix Park during his two-day visit here in August. The rain. The media coverage. The off-puttingly dire warnings about traffic and parking. The pope’s failure to act on the child abuse cover-up within the church. The prosaic truth seemed to be that not enough people were bothered.

But the significance of the visit wasn’t only in the numbers. There was a meeting with eight survivors of clerical abuse which this newspaper described as “the most extraordinary meeting in the long history of the Catholic Church in Ireland”, which lasted an hour and a half, and during which he listened intently.

What we learned Pope Francis is full of contrition and compassion. But we’re still waiting for real action. (Nothing that we didn’t already know.)

The American Krispy Kreme franchise came to Blanchardstown, Dublin in late September, bringing with it such delights at the nutty chocolatta, the Dublin sprinkles, and a previously undiagnosed form of madness, possibly related to the bread-induced separation anxiety discussed earlier.

This particular manifestation involves queuing for undisclosed periods in your car for a box of overpriced, calorie-rich carbohydrates, and then posting delirious selfies to your social media, similar to the ones taken by exhausted climbers when they reach the top of Everest. Even Americans were baffled. “The first Krispy Kreme opened in Ireland to such a frenzy you’d think they’d never seen a doughnut,” the Washington Post sighed.

What we learned You really would think we’d never seen a doughnut.

By far our favourite visitors of the year were the All Blacks, who came to the Aviva in November and got a proper Irish greeting. No, we didn’t insist on giving them a cup of tea, a bit of brack and a full breakdown on everyone who died recently in the parish. We just beat them 16-9 at rugby instead.

What we learned Ireland are now serious contenders for, touch wood and bless yourself, the big tournament in Japan.