Kathleen Swaine obituary: The ‘coolest, most beautiful cat in town’

Kathleen’s favourite thing to do was giving, and she gave to everyone 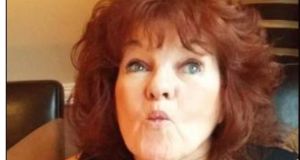 Kathleen Swaine was described at her funeral Mass as ‘a cross between Marilyn Monroe and Sue Ellen Ewing, but smarter and more fun’.

Kathleen (Kay) Swaine was “the coolest, most beautiful cat in town. She brought the conversation, the glamour and, of course, the 6-inch heels. A cross between Marilyn Monroe and Sue Ellen Ewing, but smarter and more fun.” So her funeral at St Joseph’s Church in Dublin’s Terenure was told. She died of Covid-19 in St James’s Hospital on May 5th.

Born on October 17th, 1937 in Dublin’s Rotunda hospital, Kay spent her life between Rathmines and Terenure. Her father, Richard Stewart, was master carpenter at the National History Museum in Dublin for 30 years. He and wife Kathleen had two daughters, Kay and Evelyn, also deceased.

As a young woman Kay worked in the Dublin city centre Horse Shoe bar, as a typist in a solicitor’s office and in Lord John’s nightclub as a cloakroom attendant. “From the very beginning of her life she was determined to be self-reliant,” her funeral was told. Later she would save all the money to buy her Ashdale Road house in Terenure.

She and Alan Swaine met when she was 13 and married in 1960 when she was 23. They had eight children: Caroline, Janette, Stephanie, Robert, Mark, Tara, Cathy, and Sandra who died shortly after birth. Sandra was her first child, whom “she cried about till the day she died”, recalls granddaughter Nicola Lavelle.

Kay’s husband set up his own business, Alan Swaine Cars, on Grand Canal Street, but in the early 1970s the couple separated and he went to Berlin where he ran a successful bar. She sold their house, bought Ashdale Road, worked in shops locally and was helped by her mother in rearing her children.

Some years later she met Eddie Byrne (83), a printer at Smurfit Press. They were together for 40 years, until her death. He was her “beloved life partner and dear friend”, her funeral Mass was told.

Yet Kay remained a “caring friend and confidante” to her husband “up until the very end of his life [in 2005] where she made sure that Alan made it home to Ashdale Road”.

But “the love story of ‘Kay and Eddie’ is one of the greatest of them all”. It was “like Cleopatra and Mark Antony, only with more style and finesse”, her funeral was told.

Giving was her “favourite thing to do and she gave to everyone”. Her reward “was seeing the reaction on your face when she gave you something”. To her 14 grandchildren she was “not a normal granny; she was a glamorous nana”. All the stars in the sky “would not add up to how much her grandchildren loved her, and she loved them”, according to the eulogy read at her funeral by daughter Caroline.

It was written by Kay’s eldest grandchild, Nicola Lavelle, who works in Dubai and has not been to Ireland since February last due to Covid-19. She was unable to attend her grandmother’s funeral, which she followed on webcam.