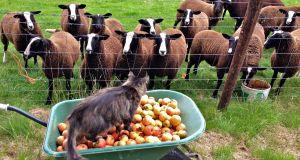 Anyone who has been following Suzanna Crampton’s daily videos, vignettes of life on her farm in Kilkenny, will marvel at the sound when she unlocks a metal gate and her impatient, bleating flock of chunky chocolate brown Zwartbles sheep stampede through it in a mighty rush to get to their breakfast troughs. Puppies and dogs rush out of the way to avoid their hooves while her well-positioned iPhone occasionally takes a tumble.

Crampton is a farmer, photographer and writer, and her captivating social media posts have created a huge following both here and abroad. Viewers learn from her lively commentary about her style of farming, her fields and her animals – sheep, alpacas, dogs, cats, horses, doves and chickens, plus her most recent companion, a young crow. For urban viewers it also raises awareness of the everyday demands of a hardworking farming life in an entertaining and accessible way.

Black Sheep Farm, which has been in her mother’s family for eight generations, nestles in the river Nore valley near Bennettsbridge, in the foothills of the Blackstairs mountains and overlooked by Mount Leinster. Most of the fields face south and are planted with mature oak, beech, larch and cherry trees under which her flocks graze in their paddocks.

Her deep understanding of animal behaviour comes through in the videos, an instinctual empathy that she attributes to dyslexia. “I was severely abused and beaten up by my peers at school as a child because of it,” she says. “So I learned body language and in turn you learn about the body language of animals and how to connect with them. It is also about understanding humans. Our first language is body language and we have not needed that facility.”

She is also blessed with considerable storytelling skills both in person and on the page; her book Bodacious, about her shepherd cat, was published two years ago. The rescue animal, “with tractor loads of personality”, was an unexpected hit, selling out in hardback. Bodacious even made history as a cover star of The Lady magazine in the UK. Since then the book has charmed animal lovers worldwide and has been translated into French, German, Italian and more recently Japanese.

Crampton was born in New York. She and her sister spent childhood summers in Ireland, helping out on their grandparents’ farm and market garden in Kilkenny. After school she studied agricultural and environmental sciences in Vermont, and furthered her education at the School of Arts in North Carolina and the American Academy of Dramatic Arts in New York.

She then embarked on a career that included training horses, acting and modelling in New York (where she hung out with Madonna and Sean Penn) followed by various stints in London, in theatre and in a veterinary practice, which ultimately led to a long period in southeast Asia, gathering and collating information for a wildlife charity. That experience – and she has many tales to tell of that time – ended when she contracted mycoplasma and returned to Ireland to recuperate, where she ultimately settled 20 years ago.

With interests in farming on both sides of the Atlantic, she describes herself as a regenerative farmer. “What I am doing cannot be pigeonholed. It is using basic tools that modern science and technology have frozen. It is not organic, not conventional, but has to do with biodiversity. Feeding crops with fertiliser is like producing crops on cocaine or a strong drug and ignores the soil biology and microbiology,” she says.

Getting her talking about her hero, the dung beetle and how it enriches the soil, recycles and sustains its mineral content and obviates the need for mineral dosing of livestock, leads to another learned, impassioned lesson on agriculture; she is currently an honorary ambassador for Farming for Nature, a nonprofit initiative supporting high-nature value farming in Ireland. She was also the first farmer in the UK or Ireland (rather than a chef or cook) invited to the Meatopia Festival in Dublin to give a talk on biodiversity and farming.

Crampton’s sheep are Zwartbles – pronounced “zvart blass”, meaning “black white” – a Friesian breed from Holland originally used for milk and cheese production and once threatened with extinction due to changing dairying practices, but now thriving again. Crampton rears them for their meat and their wool but has hopes to use them one day for dairying “and making delicious ice cream – their milk is much more digestible than cow’s milk and lasts longer”. She sells knitting wool and very beautiful blankets from their fleeces, which are cleaned, spun and woven by Philip Cushen in his 200-year-old mill in Graiguenamanagh and sold all over the world.

“I designed blankets based on the breed’s colours and markings, and within three weeks of the launch in 2013 they were selected by the Design & Crafts Council of Ireland for the Design Festival in London. So, instead of being in Minnesota for a major Tyrone Guthrie event [her granduncle] I was going to the Old Vic to see James Earl Jones and Vanessa Redgrave in Much Ado About Nothing. Vanessa regaled me with stories afterwards backstage about Uncle Tony’s memory of her as a spear carrier,” she recalls with a laugh, adding that within three months Michael D ordered her blankets as diplomatic gifts for his state visit to South and Central America. “And dogs love the blankets. Cats love the blankets because they love real wool.” And wool, she reminds us, sequesters carbon.

Crampton is tall, rangy and usually clad in denim and wellingtons, Crampton’s ancestors include Russian immigrants to the US and early American settlers from Yorkshire. She is also the daughter of eminent US cardiologist Dr Richard Crampton, professor of cardiology at the University of Virginia known for his pioneering work with mobile cardiac resuscitation units and for saving Lyndon B Johnson’s life after a heart attack.

Her maternal grandfather was the noted Irish essayist and writer Hubert Butler, whose wife was Peggy Guthrie, sister of Tyrone Guthrie, who bequeathed the family home in Annaghmakerrig, Co Monaghan, to the Irish State. Crampton’s mother, Julia, their only daughter, inherited the 50-acre farm at Maidenhall, after Peggy died, part of which Suzanna now farms.

Currently she is working on her next book, about one of her dogs, Inca, “The World’s Smallest Sheep Dog”, and her life as a very small dog among larger farm cats and learning how to herd sheep. It was the late Bodacious’s enthusiastic followers on social media that led to Crampton being approached by publishers for its rights and an ensuing bidding war handled by her agent, Marianne Gunn O’Connor, who is now dealing with her second book.

'I still can’t believe that I, a dyslexic, have written a book'

Crampton is full of praise for her and for editor Alison Walsh. “I could not have done the first book without Alison. She is an urban person who would query anything she didn’t understand. I remember in the 1970s when we had refugees from Belfast who stayed in Kilkenny, and we would bring them to the farm and these kids were disgusted to discover that potatoes came from the ground and repulsed at seeing where milk came from, so from an early age I was aware of the urban/rural divide. [I am therefore aware of the importance that] if you are an urban person that you can understand what I am talking about.”

Originally, Crampton used social media primarily to sell her sheep. “When I was posting stuff, I would work on some tweets trying to make visual imagery with words. That taught me how to edit and write so I could enjoy it. I still can’t believe that I, a dyslexic, have written a book,” she says with an incredulous laugh.

The recent publication of the paperback of Bodacious will give her the freedom “to plant more hedges and things like that and get a tractor so I can spread my own farmhouse manure and make my own hay”, she says, explaining that her most recent challenge was bottle-feeding a baby alpaca (“you have to S bend the neck so that it gets into the right stomach”). Her many followers will be guaranteed more video treats in coming weeks and months as the story of her farm life continues to unfold.

Bodacious: The Shepherd Cat is published in paperback by HarperCollins €12.99