Cabra native worked in Bahrain, Frankfurt and Yemen and loved going to horseracing with his wife Betty 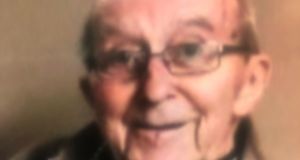 Hugh Hunter was an Aer Lingus man through and through. “He loved Aer Lingus and loved to travel. He travelled the world,” recalls daughter Patricia Gleeson. “As a young lad he used go out to the airport to look at planes,” she said.

He grew up in Dublin’s Cabra and was attending the Christian Brothers in North Brunswick St, as well as being in the Pro Cathedral’s Palestrina choir, when his father John heard they were looking for a messenger boy at Aer Lingus headquarters on O’Connell Street. “From there he rose quickly up the ranks through operations at the airport to senior sales management,” says Patricia.

Then he met “the biggest passion in his life” Betty McNamee, at the tennis club in Glasnevin. “It was a huge grá from the get go.” They married at Iona Road when she was 19 and he was 26.

“He had been released by Aer Lingus to work for a Canadian airline in Bahrain. Christine (the eldest of their four children) was born in Bahrain. Stephen was born in Manchester and I was born in Bingley, Yorkshire,” says Patricia.

After Bahrain, Hugh headed up sales operations for Aer Lingus in those parts of England before the family spent two years in Frankfurt. “Then we returned to Ireland in 1963, to Foxrock, and Elisabeth was born in (St Michael’s hospital) Dún Laoghaire.” Hugh remained based in Ireland until retirement when “he went on contract to Yemen to help develop an airline, but there was a coup and he had to come home hurriedly,” says Patricia.

After that he led “a quieter life, though he had a fantastic interest in sport. Horseracing, soccer, Manchester United, watching golf on TV, any sport.” Both he and her mother travelled “the length and breadth of the country to race meetings. I was half reared in the crèches of the country,” says Patricia. “They were very stylish. My mother loved dressing up. They cut a fine couple.”

He was also “a fantastic father and grandfather, great craic and great fun. He adored his grandchildren.”

Betty developed dementia and became a resident at the Glengara nursing home in Glenageary, where she died in 2018. “He was absolutely devastated, and struggled at her passing.”

With heart problems and arthritis he had been admitted to the nursing home himself shortly before she died. That was where he died himself, “very quickly”, of Covid-19, on April 4th.

No one could be present. His coffin was taken to the carpark of Foxrock church where prayers were said as the family sat in cars. At Deansgrange cemetery, when the remains had been placed in the grave, the family dropped roses onto his coffin.

Stephen gave a eulogy as the song Moon River played in the background. “From (the film) Breakfast at Tiffany’s, they loved that song. But, nobody deserved to go like that. Nobody,” says Patricia. “He was such a big personality. He would’ve loved a hooley.”