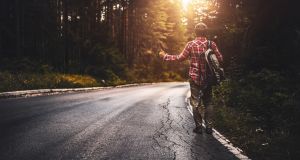 My younger self swore that when I owned a car, I would always give lifts. But I didn’t. Photograph: Getty Images

Back in the black and white times, before the European Union stole our souls in return for motorways, Ireland took a lot longer to get around. To drive from Dublin to Galway, for instance, could easily take 4½ hours. More if there was traffic.

There was bound to be traffic: because there were so many places to drive through. I used to be able to recite every town and village on the Dublin-Galway road. Years later, I harboured a half-baked ambition to make the journey along this old route again.

But I never did. It wouldn’t have been the same, because I didn’t drive. I hitched.

Imagine: not too long ago it was considered socially acceptable, and not particularly unsafe, to beg at the side of the road in the hope a stranger would stop in their car and bring you where you wanted to go. Or part of the way. All-the-way lifts were exceptionally rare.

My normal procedure was to get a 66 bus to Maynooth and stand on a stretch of road opposite the university, chosen because it gave cars plenty of room to pull in. There was usually a queue, though it didn’t operate on a first-come, first-served basis. Motorists always stopped for women, who were considered safer, while male hitchers had to somehow demonstrate that there was nothing threatening about them.

This wasn’t reciprocal. Car owners were above suspicion.

I was a distinctly non-threatening young man, but they were unenlightened times. My gender was held against me. So, my main strategy was to appear as pathetic as possible. No signs. No dancing or elaborate hitching style – motorists might think you were crazy. Just stand there, thumb out, looking sad. Preferably in the rain. When it wasn’t raining, I’d take my coat off so I could look cold.

Now if I see a hitcher, it’s such a rarity that I assume they are crazy or dangerous, or both

Invariably, they were heading just a few miles – we had miles then – or, if they were going a substantial distance, they’d drop me in the centre of that town, necessitating a long trudge to the outskirts and the best hitching spot.

I hitched that route so much that it became the subject of my first piece for a national newspaper. “Thumbs up to the art of hitching” was printed in the Evening Herald and consisted of a series of tips on how to get a lift. I didn’t mention standing in the rain or way-too-personal questions.

Of course, I swore that when I owned a car, I would always give lifts. But I didn’t. The motorways had come by then, and young people were better able to afford trains and buses. Now if I see a hitcher, it’s such a rarity that I assume they are crazy or dangerous, or both. If any of my kids said they were going to hitch, I would cross continents to prevent it.

I’d be too worried, or more precisely too aware of the potential dangers. Even though people haven’t changed that much since I was a young fella. But now we know more. We have more things to be scared of.

My younger self had virtually no concept of risk. There was rain and frustration, but I relished the adventure of getting from one side of the country to the other, often with little or no money. Ireland seemed vast. Now it seems tiny. The world has shrunk in more ways than one.

Eileen Flynn: ‘As a Traveller woman, I was undermined in the maternity hospital’
Real news has value SUBSCRIBE