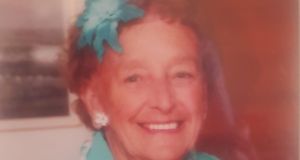 Carmel Dwyer: ‘She was a lively one’

Carmel Dwyer was born on May 8th, 1928, the youngest of nine children, at what was once known as McCaffrey’s Estate – later Ceannt Fort – in Kilmainham, Dublin.

After a relatively short education, she took up a job on the production line at Jacob’s biscuit factory in the south inner city.

She met her future husband, Noel, at a dance. “It was lady’s choice, I think, and she put her eye on him and that was that,” daughter Teresa O’Connor recalls.

The couple got married at the start of 1952 and bought their first and only house in the southside suburb of Walkinstown – then just being developed – before having their first baby at the end of the same year.

After daughter Noreen came son Brendan and then their third and last child, Teresa.

Carmel, a “Trojan worker” with an entrepreneurial streak, spied an opportunity in a small, vacant shop premises in Crumlin by the time the children were over infancy.

Ever canny, she secured it on a peppercorn rent to launch a second-hand clothes shop – mostly for women and children – which became well known in the area in the early 1970s.

“There was a huge amount of poverty in Crumlin at the time and she saw it as almost a service to the community,” said Teresa. “Don’t get me wrong, she made a few bob out of it as well, but not an awful lot.”

After a few years establishing her name, Carmel’s moved to another premises closer to Crumlin village, then selling new clothes.

Customers left deposits on items and she had a savings club, managing weekly lodgments spread out over the year so people could afford coats and new outfits for their children come Christmas.

Every week the shop was open Tuesday to Saturday. Carmel spent Monday at the wholesalers buying in stock or seeking out special orders for her customers.

“Had she been born in a different time I think she would have probably been an even more successful businesswoman,” said Teresa.

Away from her business, Carmel had a huge circle of friends – both in Dublin and Arklow, Co Wicklow, where she and Noel would retreat to their bolthole caravan on weekends and much of the summer.

“She loved walking the beach, getting the sand between her toes, collecting shells.”

When daughter Noreen emigrated to Australia in 1986 it was “a huge loss”. But she visited her a number of times over the years, more recently for the weddings of two of her adored eight grandchildren.

The death of her granddaughter Gwen, only months old, in 1994, hit her hard. Noel “went through a lot with her in that grief and it had a huge impact on his health”, remembers Teresa. Noel died the following year.

“They were a very close couple, even though she was quite independent.”

Without Noel, the indefatigable Carmel threw herself into the local ladies club and her cherished dancing. She was out at least five nights a week.

“She couldn’t be sitting down doing nothing. Even when she was sitting down, she was knitting. None of the grandchildren ever needed a jumper or cardigan.”

Onset of blindness in 2016 robbed her of a love of watching nature and meant she had to go into a nursing home.

Her glamour, humour and warmth were remembered by many who commented on her online book of condolences, attesting to her “great attitude to life”.

“The dancing, laughing, joking lady that you were,” wrote granddaughter Emily. “I don’t think we ever called to your house and you hadn’t got your hair in rollers for the evening of dancing.”

Memories was her party song, and she was well-known for reciting a “rude poem” called The Robin, in which the bird comes to an unfortunate end.

“She loved the parties. She was a lively one,” says Teresa.