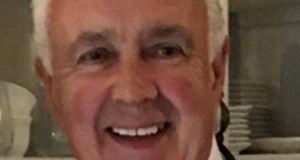 David Griffin was the main dealer in Ireland for Daihatsu and Lada cars.

News of David Griffin’s death on April 26th was announced with great sadness on the Motorsport.ie Facebook page, where he was described as a “former FF1600 star and member of the Griffin dynasty.” FF1600 refers to motor racing championships involving Ford Formula cars.

People sympathising with the family referred to him in comments, again and again, as “a gent” and “a great competitor” who had raced successfully, including winning championship races in the UK.

One man recalled how “in 1979 I was looking for a driver for one of my Harlequin Racing Van Diemen RF79 and a mechanic.”

David was recommended to him.

“David and I met and I ended up with my driver, mechanic and a new lodger, David got his drive and repaid my team with winning the Irish Formula Ford Festival and the Brands Hatch FF1600 Championship. But it wasn’t just the racing success, David became a great friend, he was a fine and sympathetic with the car driver, instinctive mechanic and a bloody good laugh. He will be sorely missed.”

Amy Griffin does not so much remember her father’s prowess with racing cars,but as the “warm, generous person people were automatically drawn to.” His nurses at the Abraham Colles ward in St James’s hospital, in those last weeks, were “God-like, unreal to him. They were so good and did amazing work, they were so fond of him.”

His death from Covid-19 followed a catastrophic fall from a ladder at his business premises in Dublin’s Tyrconnell Rd in Inchicore last October. He suffered serious brain damage and was in a coma for eight weeks before making a limited recovery. Then he had two bouts of pneumonia.

David Griffin was born in Belfast, where his parents were based temporarily due to his father, also David, working there for a period.

In 1950 David Snr, who was also very much involved with motorsports, built a Formula One car which recently sold at the Paris Motor Show.

In 1956 the family returned to Drimnagh in Dublin, where David jnr attended Drimnagh Castle primary and secondary schools until he was 15, when his father died. He then took over his father’s workshop and as breadwinner for his mother and four siblings. He also began to race competitively himself, something that continued into his 30s.

He and Freda met at Blinkers nightclub in Leopardstown and married in 1981. He opened Dave Griffin Motors, Tyrconnell Road, Inchicore, and was the main dealer in Ireland for Daihatsu and Lada. The family, which now included daughters Amy and Gillian, moved to Rathfarnham.

Amy remembers him as “an absolute workaholic” who only slowed down when her two children Evie (3) and Ethan (2) arrived. “His eyes would light up when he’d see them.” She and husband Eric work in her father’s business. “He was like the Lord Mayor of Inchicore”. Some residents had even suggested they should change the name where the business is based to “David Griffin Road,” she says.