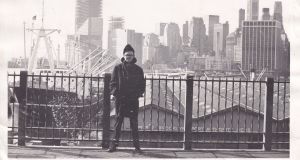 Godfrey Fitzsimons in New York in 1969 or 1970. The Twin Towers are under construction on the left hand side.

Godfrey Fitzsimons, who has died aged 79, was a pillar of The Irish Times for the best part of 40 years, and a copy editor who policed the rules of grammar, syntax, legibility and house style with an unforgiving eye.

He was also a film critic whose skills were acknowledged by rivals. “The combination of his writing skills and acerbic wit gave a heightened individuality to his weekly contributions. I loved working with him as a fellow critic,” said Philip Molloy, then with the Irish Press.

A tall man, he sat bolt upright at the revise sub-editors’ desk scrutinising news copy and ruthlessly putting down verbal flights of fancy. Pity the reporter whose traffic report included the word “gridlock”. I don’t think we have any cities laid out on the American grid system, Godfrey was heard to say as he pounced. Nothing got past him. Chief sub-editor Pat O’Hara described him as a “safe pair of hands”, an accolade any journalist would kill for.

Born on March 30th, 1941, he was the second son of George Fitzsimons, a linen mill book keeper/office manager and his wife Ethel. They lived frugally on the outskirts of Ballymena, Co Antrim.

Ethel had worked in a millinery shop and was known for her good sense. The brothers played “cowboys and Indians” in the adjoining public park and fished in the Doury Burn, a local stream, for tiny fish they called spricks, cutting their feet on old tin cans and bottles. After finishing school at Ballymena Academy, Lionel became a Presbyterian minister and Godfrey won a place at Trinity College Dublin.

Godfrey’s name appeared in this newspaper in November 1963, in a listing of Trinity examination results. After graduation he worked for a while for the Belfast Telegraph, writing leading articles. After about four years, Godfrey got restless and took himself off to the Columbia Journalism School, in New York, where his love of film appears to have flowered.

In 1970 he began to work for The Irish Times, doing general reporting and initially acting as back-up film critic to Fergus Linehan. Writing about film enthused him. Godfrey was proud to work alongside a distinguished generation of critics, including Barry Norman at the BBC and Dilys Powell at the Observer. Godfrey was a big admirer too of Alexander Walker of the London Evening Standard, and a fellow Northerner, being from Portadown.

America had enthused him too, and he took a couple of years out, travelling around. On his return, he worked for the Sunday Tribune for a brief spell, then returned to the Old Lady of D’Olier Street until retirement. The wanderlust never left him. Sometimes he just vanished. Friends knew he was probably on a train across Europe, and his itinerary would be revealed by a postcard from somewhere north of Malmo perhaps.

A private man, he nurtured his friendships, taking great care to keep in touch, discreetly helping any who fell on hard times. “I think of Godfrey as a book,” one who knew him a long time said, “I was allowed to see some pages, others saw different passages, but none of us got to read the whole volume”. He died on July 17th.