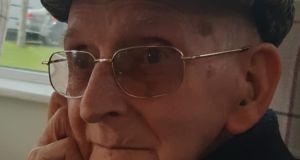 Thomas (Tommy) Smyth was a well-liked and well-respected night worker in the caseroom of the Irish Press for more than 30 years.

Born in Dublin on Easter Monday, April 13th 1925, to Denis and Ellen Smyth, Tommy was the youngest brother to Ellen, Sean and Paddy. The family originally lived in Allenwood, Co Kildare, but moved to Gerard Street in Ringsend in Dublin when Tommy was still a young boy.

As a child, Tommy contracted TB, and was institutionalised for a year while he recovered from the disease.

After attending the local primary school, he want to Ringsend Tech. He showed an early aptitude for machines; at the age of 14 he assisted a teacher in converting a petrol engine to gas. He also loved Irish dancing, winning several medals, and played soccer on the Ringsend Tech football team.

During the second World War, he signed up to serve in the Local Defence Force, training on the anti-aircraft artillery station in Irishtown in Dublin.

As a young man, he worked for a while in Henderson’s garage close to where he lived, where he learned to drive.

Through a group of mutual friends at a cycling club, Tommy met Kathleen (Betty) Delaney from East Wall. They fell in love and married in 1953 in St Joseph’s Church in East Wall, and moved to Santry, where they raised their three children, Sandra, Brian and Colin.

Tommy was introduced to the printing industry working in a small family business. With the experience he gained there, he went on to work in Alec Thom’s in Abbey Street, followed by the Frederick Press and finally the Irish Press, where he worked night shifts in the caseroom for more than 30 years. He retired in 1985.

“I had the pleasure of working with him in the caseroom for just over a year before he retired and the Irish Press closed its doors,” his son Colin says. “He was well liked and respected.”

Working the night shifts, Tommy didn’t get much time to spend with his family, but summer holidays together in Glendalough were treasured quality time for them all. He also enjoyed fishing with friends from the Irish Press.

In her later years, Betty developed Alzheimers, and Tommy became her main carer until she died in 2006. Tommy lived alone after that, but suffered from dementia in recent years.

“He coped well on his own under the circumstances, and liked nothing better than watching some of his hundreds of DVDs of Inspector Morse, Frost, and John Wayne, then complaining about re-runs on the TV!” Colin says.

Over Christmas, Tommy had a fall. “He didn’t break anything, but his time living at home had passed,” Colin says.

He was cared for at Beaumont Hospital until the family secured a room for him at Tara Winthrop Private Clinic in Swords on February 17th. He contracted Covid-19 in April, and died peacefully in the care of the staff on April 30th, shortly after his 95th birthday.

“We were able to see him briefly until Tara Winthrop closed for visitors on March 4th,” Colin says. “Although it was very difficult to watch his final days through a window, we also consider ourselves fortunate that we could still see him, some people couldn’t even do that.”