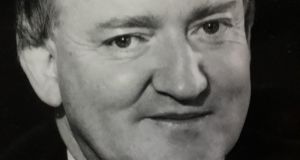 The Irish diplomat and European Commission official, John McColgan, who died recently was born in Dublin, with strong familial links to Donegal. He played a significant role in developing communications with the unionist community in Northern Ireland during the 1970s.

His first diplomatic role was as press officer at the Irish embassy in London in the early 1970s. Back in Dublin in 1974, he became the first Irish government official appointed as a covert contact with the unionist political, religious and paramilitary leaders in Northern Ireland.

At that time there was no official home for Irish diplomats in Northern Ireland so McColgan travelled almost daily to the North accompanied by Sean Donlon, then assistant secretary at the Department of Foreign Affairs, who was meeting leaders in the nationalist and republican community. Over a period of 18 months, McColgan formed firm friendships with key political figures including Rev Ian Paisley, John Taylor and Bill Craig as well as paramilitaries, Andy Tyrie, Glenn Barr and John McKeague. Donlon recalls that following the murder of the British ambassador to Ireland, Christopher Ewart-Biggs in July 1976, a loyalist hit squad was planning a revenge killing and McColgan was its target. However, Tyrie intervened and stood down the attack, thus blowing McColgan’s cover and ending his covert discussions. His work was however deemed to have laid foundations for future negotiations on Northern Ireland which culminated in the Anglo-Irish Agreement between then taoiseach Garrett FitzGerald and British prime minister, Margaret Thatcher in 1985.

Following that testing experience, McColgan returned to the European Commission office of Dr Paddy Hillery where he had previously worked from 1973 to 1974. In that earlier period, his fluency in French and German had greatly assisted Hillary as commissioner for social affairs in the initiation and implementation of the first Social Action Programme for Europe in 1974.

McColgan remained with the commission for the rest of his career and was head of administration at the European Foundation for the Improvement of Living and Working Conditions (Eurofound) in Dublin, 1976-1995. This agency was one of the first decentralised EU agencies and McColgan was influential in bringing it to Ireland. In European negotiations on workers’ rights and safe working conditions, his linguistic talents, profound interest in European history and experience of being from a small country in the burgeoning European project were assets.

The only son and eldest of three children of Robert and Mary McColgan (nee Quinn), John McColgan grew up in Malahide, Co Dublin. Both of his parents were from Donegal: his father, an accountant in the civil service was from Culdaff on the Inishowen peninsula, and his mother a Donegal County Council official before marriage, was from Ballybofey.

At 11, John was sent as a boarder to Clongowes Wood College in Co Kildare. He excelled academically and in debating and in 1957 joined the Jesuit order as a scholastic to enter the priesthood. For the next nine years, he studied classics at University College Dublin, philosophy at the University of Heidelberg and philosophy and theology at the Jesuit-run Heythrop College in Oxfordshire. However, in 1966, he left the Jesuit order before his ordination and was hired by the ministry for external affairs (later renamed the Department of Foreign Affairs).

In 1966, John met Jane Hyland, who also grew up in Malahide and played hockey with his sister, Annie. The couple married in 1969, the same year that McColgan was appointed as a private secretary to the new minister for foreign affairs, Dr Paddy Hillery.

In their early married life, the McColgan family moved between London, Brussels and Dublin but then settled in Donnybrook where their children grew up and attended school. When the children were young, they returned to Donegal for family holidays and then as they became older, the family spent long summer holidays in France.

Outside of work, he enjoyed golf, played poker and bridge, and hosted and attended dinner parties with his wife, Jane. His keen intellect was shaped by an affable manner and strong interest in cultural and political affairs. A good listener, he was renowned for his wise counsel. His friendships spanned the worlds of politics, media and the arts and he was a good source of information for many political journalists.

Following his retirement in 1996, John and Jane continued to travel throughout Europe and spend time with their adult children and grandchildren. McColgan’s health declined in latter years and he spent his last 11 months in the Jesuit run Cherryfield Lodge nursing home in Milltown where he died.

John McColgan is survived by his wife, Jane, his children, Mark, Garth, Kate, James and Robert, his sisters, Mary and Annie and nine grandchildren.