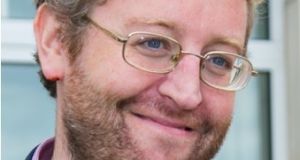 With the death of David Connolly on April 28th at the early age of 37, Ireland has lost a musician and academic of high achievement and even greater promise.

Born and reared in Kilnacrott/Ballyjamesduff in the heart of rural Cavan, he received his secondary school education at St Patrick’s College in Cavan town, where he was a high academic achiever, excelling in music and mathematics. In the former subject he was fortunate to come under the tutelage of the school’s gifted music teacher, Ciarán Tackney, who considered David to be the most talented student he ever taught.

From Cavan he moved to Maynooth University, where he studied both music and mathematics, graduating with a double first.

In music, he drank deeply of the riches that uniquely placed campus had to offer, between the secular menus of the National University college, and the rich tradition of Gregorian chant and high liturgy that St Patrick’s College offered in parallel.

David threw himself with vigour into all that was offered and rapidly was on course to become a fine organist, a rigorously trained musicologist, and a choral singer and conductor, much sought after by the many competing choral groups which were such a vital part of campus life.

After his primary degree he embarked on a master’s degree programme in performance and musicology, emerging again with a first, and as an organist of no mean accomplishment, and as a budding musicologist keen to engage with the many facets of scholarly enquiry.

From 2005 to 2007 he became director of the highly accomplished Maynooth University Chamber Choir, of which he was a popular, highly regarded conductor, his strong physical style of directing drawing from his singers a richly nuanced variety of choral dynamics and a full palette of vocal colours.

At this time he came to St Mary’s Pro-Cathedral in Dublin as my organ scholar, where again he entered with gusto into the challenges of playing complex choral accompaniments presented by the rapidly expanding service repertoire of the Palestrina Choir, while also extending his solo organ repertoire to embrace much of the late 19th-century and 20th-century French school with which he had a particular empathy. He was especially attracted to the music of the Paris-based quasi-mystical composer Charles Tournemire (1870-1937), who was the subject of his PhD dissertation on “The Influence of Plainchant on French Organ Music after the Revolution”. This degree was awarded him by the then DIT Conservatory of Music and Drama in 2013.

On his appointment, David became artistic director of the annual international series of summer organ concerts which had been flourishing since their initiation in 1974. Devising and presenting 12 to 13 weekly concerts annually from June to September was both a commitment and a challenge which David relished.

Continuing the tradition of bringing the best of international and national organ talent to the annual series, over his 13-year curatorship of the concerts he brought innovative repertoire to programming which sought to explore the organ’s capacity for combination with other musical forcess, while placing a strong emphasis on contemporary composition, much of which involved the work of living Irish composers and performers.

In Dundalk Institute of Technology where David was a lecturer in the Department of Creative Arts, Media and Music, and in Maynooth University where he was tutor in the music department, David was a much admired teacher and highly respected mentor and colleague, very intelligent, widely read, deeply musical, warm and generous in spirit, and witty and funny in company.

Sadly, with David’s great talents came significant struggles. In recent years he suffered badly from anxiety and depression and turned to alcohol as a means of dealing with his inner turmoil, as his brother, Peter, explained in a moving tribute at his funeral Mass.

We mourn the passing of a gifted young man full of talent and endless potential, but we will remember him for the kind, loving, generous and witty person he was. David is survived by Linda, his wife; his mother, Mary; his brother, Peter; parents-in-law Bernie and Donal; sisters-in-law Alison, Elaine, Louise, Danielle and Caroline; nephew Dylan; and niece Lucy. May he rest in peace and rise in glory.