Ethel Cashman obituary: ‘A wonderful Mammy with a passion for cinema’

Lives lost to Covid-19: Born and raised in Stoneybatter, Ethel was as Dublin as they come 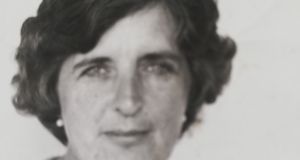 Ethel Cashman loved the company of lively people and was a great listener. “She had a wry sense of humour, and was well known for her witty asides and acerbic comments. She had a great variety of phrases and sayings from Dublin,” recalls daughter Michele.

None of which is surprising because Ethel was as Dublin as they come. Born Ethel Purcell at Finn Street in Stoneybatter, later moving to Oxmantown Road, she grew up with four sisters in a close knit Church of Ireland community.

Tragedy struck in 1942 when their father died suddenly aged 47. They managed with the help of Church, family and friends.

Ethel spent a lot of her childhood in the Phoenix Park and on the steps of the nearby Manor Cinema, waiting for it to open. She adored cinema and had an encyclopaedic knowledge of films, actors and actresses. She was delighted when, in 1944, she spotted Laurence Olivier in Dublin. Later she would attend the Cork Film Festival. “She loved foreign and independent films, and we spent many happy hours in the old Lighthouse cinema and the Irish Film Institute, ” says Michele.

Ethel met and married Griff Cashman in 1955 and, initially, they lived in Manor Place with Griff’s father Joe, a photographer. “She used tell wonderful stories about Joe developing film in his dark room there in the backyard, with the cat draped around his shoulders,” says Michele.

The couple had three children, Robert, Michele and David, and moved to Artane in the early 1960s. Griff became involved with the trade unions and Labour party. Ethel accompanied him to most related events “meeting many high flying Labour personalities of the time, including a young Michael D Higgins. ”

Tragedy struck again when Griff died from kidney failure in 1981. He was 52. Ethel focused her energies on the children. She also enjoyed gardening and wildlife programmes with “a secret passion for David Attenborough, travelling around the world with him via armchair!”

She loved it “when her grandson, and three granddaughters came along, and was marvellous with babies, getting the most ‘sleep shy’ to drift off.”

Her last decade was dominated by dementia. “It was very tough and frightening for her”. Eventually she had to go to the Clontarf Nursing Home, where “she was fondly known as Ethel the Petal.”

Ethel died on May 5th of Covid-19, two months after her 90th birthday. She was buried with Griff at Whitestown cemetery, Rush, Co Dublin. “We shall remember her wonderful Sunday dinners, her stories of childhood, her passion for cinema, and being a wonderful Mammy to all of us,” says Michèle.