During lockdown I did not bake, teach myself anything or read a book

I struggled through the lockdown as if stupefied, suspended in perpetual paralysis 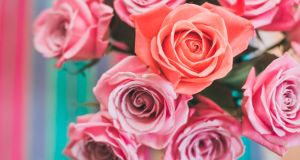 Suddenly, it was July, my aunt’s birthday month. My pale pink roses grown in memory of her were blooming. Photograph: Getty

Her birthday was in July, when the roses in her garden were at their most scented and abundant. They were deep pink and yellow and coral, and in summer, there was always a jug of them on the kitchen table.

They were storybook roses: whorls of velvety petals that perfumed the entire room. Whenever I was visiting during the summer, she would send me away with a bouquet wrapped in tinfoil, which I carefully held aloft like a scented torch.

Her birthday was in July, but I sent her cards throughout the year, every year. Sometimes I made them myself. She kept them all. She herself bought many cards, but, especially in her later years, they did not always get sent.

Sometimes I slept too much. Sometimes I could not sleep at all. The days were endless; the nights were worse

At Christmas one of my tasks was to write the addresses on the envelopes of her cards, and then take on the responsibility of posting them. She had several fountain pens and bottles of black ink. She wrote everything with one of these fountain pens in a dramatic, distinctive cursive.

When I moved into the house where I now live, there was nothing in the garden. I planted old roses, the blush pink colour of the interior of a seashell, and hoped they would grow. I planted them because they reminded me of her. The roses thrived, took root and stayed alive, but my beloved aunt died.

During the pandemic lockdown, I did not learn to bake bread. I did not teach myself anything online. I did not read a single book. I struggled through the lockdown days as if stupefied; suspended in a perpetual state of paralysis. Sometimes I slept too much. Sometimes I could not sleep at all. The days were endless; the nights were worse. Like half the world, I worried. About everything. It was pointless to worry so much, but I still did anyway.

During lockdown, I missed the living, but I also missed the dead. I thought a lot about my aunt. I thought about her husband, my beautiful uncle, who died a decade before her. They came to me in dreams sometimes.

On the nights when I could sleep, and when I had dreamed about my dead, I awoke feeling a rare sensation of calm; of having received some kind of temporary benediction that evaporated slowly as another lockdown day began.

I washed and ironed curtains. I threw out all the half-empty, out-of-date bottles of this and jars of that. I did pointless, very satisfying things

Finally I found something to distract me. I had no interest in baking, but my new occupation began in the kitchen. I started with the cutlery drawer.

My house has always been clean. I am extremely tidy by choice and nature. I was not starting the process of cleaning, tidying, organising, purging and reordering my house from the point of chaos and grime. Even so, it still took weeks, but I eventually got through everything.

I washed and ironed curtains. I threw out all the half-empty, out-of-date bottles of this and jars of that. I did pointless, very satisfying things, like putting all my napkins in a basket, organising them by colour. I made a cabinet of curiosities from random treasures. Every cupboard, every drawer, every box in every room was gone through. I stood on a high stool in my hallway and dismantled, cleaned and reassembled a complicated glass fitting that hadn’t been cleaned since I moved in, a decade ago.

And suddenly, it was July, my aunt’s birthday month. My pale pink roses grown in memory of her were blooming. I had finished cleaning my house, and lockdown was ending. I found myself wanting to read a book again.

Somehow, my former ability to focus and concentrate was returning; like a tide coming slowly but steadily back in again. Since I learned to read as a child, I had never gone so long without reading books.

It was one of the cards she had never posted; finally delivered to me like an joyous gift of love

After my aunt died, we cleared out the house she had lived in with our uncle. It took us a long time to go through everything. Each of us put aside the things we wished to keep that had belonged to them. I took some paintbrushes from my artist uncle’s studio. We divided up his sketchbooks between us. We all took crystal glasses.

I took a delicate silver wool shawl my uncle had bought for my aunt in Bond Street, London, in the 1960s. I also took some books; books on design and art, dictionaries, and some gorgeous old hardback editions of classics.

It was one of these books I now took off the shelf. As I opened it up, something fell out. I picked it up from the floor. It was a card with a picture of a mortar board and scroll and “Congratulations On Your Graduation” on the front. Puzzled, I opened it up, and my heart lurched. Inside was my name, written in my late aunt’s distinctive black script.

It was one of the cards she had never posted; finally delivered to me like an joyous gift of love; an ethereal message of acknowledgment. I had survived these long, lonely, terrible months somehow, and was now graduating all over again, out into our new post-lockdown world.