‘Kildare was a shocker. The feeling was instant’

New to the Parish: Tobi Omoteso arrived from Nigeria via the UK in 1999 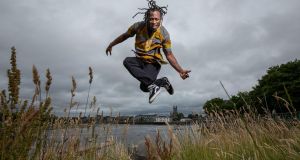 When Tobi Omoteso moved to Kildare with his family he felt different for the first time in his life. The Nigerian schoolboy had already spent a year living in the United Kingdom but never before felt like he stood out among other kids.

“Kildare was a shocker. The feeling was instant. I could see I was clearly different and there was something people didn’t like about me. In Nigeria I was oblivious to race; it just wasn’t a thing. Even when we got to the UK it didn’t feel like a problem, England was already a multicultural nation.

“At no time did I think my skin was different but maybe that was because I was a kid. Maybe I should have been better prepared by my parents and they should have told me about race and colour.”

When he was nine, Omoteso’s family followed his father to the UK where he was working as a surgeon. The following year, in 1999, they moved to Kildare after Omoteso’s father was offered a job at an Irish hospital.

The children were enrolled in a school in Celbridge town but Omoteso struggled to settle. “The problem was the teachers didn’t know how to treat me. I had a thick accent and the teacher would often become frustrated and put me at the back of the class. If I didn’t get the attention I needed I would act out and that didn’t help my case. Straight away I was separated rather than encouraged to join in, and this gave the kids a free pass to treat me differently.”

This rejection also came from classmates’ parents, says Omoteso. “Kids are honest at that age. One day I’d be playing with someone and suddenly they’d say: ‘My parents don’t want me to hang out with you.’ I couldn’t understand what was happening and cried that I wanted to go back to the UK or Nigeria. Stuff like that is traumatic and it’s only now as an adult I’m releasing that trauma.”

Many people assumed Omoteso’s family had come to Ireland seeking asylum and were surprised to discover his father was a surgeon. “Even today it’s only when they have a conversation with me they realise they shouldn’t put everyone in the same box.”

Omoteso became increasingly disruptive into his teen years but continued to receive love and support from his parents and siblings. “Thank God for my parents who showed compassion and understanding. If it wasn’t for them I would have gone the other way. Even though they were facing their own challenges they kept them hidden from us. If my parents weren’t around it would have been a different story.”

When he was 15, Omoteso’s family moved to Carlow where he started mixing with other young people of colour. He made friends with Nigerians, Indians and Pakistanis but never Irish people. “We developed our own support structure. We didn’t want anything to do with the Irish community because there was a lack of acceptance.”

He recalls how one friend joined the local GAA club but subsequently dropped out because of the abuse he encountered. “He was brave enough to say I want to try playing hurling and Gaelic football. I could not believe the abuse he got during the games.

“It came from the parents too. His coach tried his best but it was too damaging. To this day it still shocks me what happened. He wasn’t accepted and it instilled the belief that we should stick to our own. I know people who let that experience change them forever and have left the country because of it.

In his mid-teens, Omoteso and his best friend started teaching themselves to breakdance after watching the movie You Got Served, which is based on a street dancing competition.

After performing at a St Patrick’s Day event, Omoteso and his friend were invited to teach breakdancing at a local studio. “Dance became the light at the end of the tunnel. For the first time people were accepting us; our skin was no longer the first thing people saw. They saw our talent. It’s like people of colour are only accepted when they have something to offer.”

Omoteso started meeting other like-minded young people at dance events around the country. “It was a place where your colour, race, gender, ethnicity, background did not matter. The dance community was accepting of everyone. As a kid it was a haven.”

Omoteso went on to study engineering at college but dedicated his free time to dance and choreography. He helped set up a dance studio in Waterford which funded trips to studios in New York, Boston, LA and across Europe where he developed his dance skills.

“I saw dance as an expression rather than something I wanted to make money from. I have my masters in electronic engineering but dance is my outlet. I have a job to make a living but my art is for me to be alive.”

Omoteso is now director of the TOP 8 street dance company and gives classes at studios, schools and youth groups around Ireland. “I want to do for kids what that movie did for me. That’s why dance is so personal. I’ve seen it change lives. It changed my life.”

He lives in Limerick with his five-year-old daughter who he says has already experienced racism in her short life. “She’s mixed race and refuses to let her amazing, curly afro hair down. She told us other kids say mean things about her hair. It makes me feel so frustrated and annoyed. Kids will be kids of course, but if you do not instil acceptance in them from an early age they will grow up to have those prejudices against colour. It will become something innate. I don’t want my daughter to be a victim of that.”

He feels encouraged by the Black Lives Matter movement unfolding in Ireland but fears change will take a long time. “Racism shouldn’t be a black and white issue; it’s not one race against another. It’s not an attack on anyone; it’s just so we can have a mutual understanding. It’s humans coming together against racism and prejudice.”

Tobi Omoteso is taking part in the Dancer from the Dance festival, which will be live streamed on Facebook and YouTube from June 29th to July 3rd.