New to the Parish: Chef and entrepreneur Athula Kuruppu Arachchi arrived from Sri Lanka in 2005

Originally from Sri Lanka, Athula Kuruppu Arachchi has worked as a chef all over the world, cooking for prime ministers, kings and US soldiers. He moved to Ireland in 2005 and now lives in Cork with his wife and children. 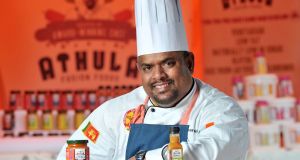 Athula Kuruppu Arachchi: “Running your own business is very hard, you have to sacrifice so much. You’re not getting any margin at the beginning.” Photograph: Daragh Mc Sweeney/Provision

Athula Kuruppu Arachchi’s grandmother taught him to cook. As a child, he’d often watch in fascination as she bustled around the family kitchen mixing ingredients from the garden in a rough, clay bowl. “That was how she made the curries. We had tamarind, garlic, curry leaves, chillies and other varieties of vegetables. From season to season the vegetables change. We had egg plants you could keep for a year and then papaya and mango trees. Everything was in our own garden.”

Despite the family’s abundant supply of fresh fruit and vegetables, growing up in Sri Lanka in the 1980s was not easy. In 1983, conflict broke between the Tamil Tiger rebel group and the Sri Lankan government, leading to widespread violence across the country. The subsequent 26-year long civil war resulted in an estimated 40,000 deaths.

Arachchi, who lived in a small rural community outside the capital city of Colombo in the west of the country, was in secondary school when the fighting began. “I was supposed to go to university but with the civil war every place was unsafe. It was time to make money myself and to be helpful to my family so I decided not to go to university.”

I was working from 8am to 8pm and cooking 10,000 meals a day. My wife had given birth to my twin sons, so I wasn’t in a position to be picky

He began working in hotel kitchens and eventually secured a place on an apprentice scheme for trainee chefs. Following the course he was offered a job as an apprentice chef in a five-star hotel. “It was very high class. There were eight different cuisines in the kitchens, it was the best place to learn.”

Arachchi then signed up to an agency that could find work for chefs abroad. After a stint in Yemen he returned home to Sri Lanka and opened his own catering company and his own restaurant. However, the financial instability in the country eventually forced his restaurant to close. His wife had recently given birth to twin boys and he needed to earn more money to provide for his young family, so he returned to his agent to find another job overseas.

He was initially sent to work in the city of Shenzhen in south-eastern China but was then transferred to Iraq where he worked as the head chef in the kitchen of an American army barracks. “The hours were very long. I was working 12 hours from 8am to 8pm and was cooking around 10,000 meals a day. It was one of the hardest work experiences I’ve ever had but it was my only option. My wife had given birth to my twin sons, I wasn’t in a position to be picky.”

After a year in Iraq he moved to Bahrain where he cooked in the kitchen of the international airport’s VIP lounge. “That was a good experience because you’re cooking for prime ministers, the sheikh, kings, secretaries, security guards, everyone.”

‘I was very lonely’

As time passed, Arachchi became increasingly uncomfortable with the long months he was spending away from his family. “I was very lonely, the loneliest I had been in my entire life. But I was doing it for my family. I wanted to give them a better life and a future to look forward to.” After completing his contract in Bahrain, he return to Sri Lanka to be with his loved ones but knew he would have to leave again soon. Then his agent told him about a job opening in Ireland.

“I knew from reading the news that previously people didn’t like to go to Ireland because of the war in the north but I also knew that Ireland was starting to boom. My agent forwarded my application to the hotel and they picked me.”

In 2005, Arachchi boarded a plane to Ireland to begin his job as a chef in Hayfield Manor, a five-star luxury hotel in Cork city. “When I saw the hotel I was like, what? It was totally different to hotels in other countries, it was like a house. It’s wasn’t modern. But when you go inside the hotel, wow!”

I’m happy here because my children are happy and they have a safe life. Of course I miss my country and my culture

Arachchi enjoyed working with Irish colleagues and says the atmosphere in the hotel was friendly and relaxed. However, it was difficult to settle into Ireland without his wife and children. He applied for family reunification but was rejected on the grounds that his salary was not high enough to care for his loved ones. “I was so upset about that. When I went back to the hotel I told the manager and they wanted to help me. Straight away they increased my salary, gave me a promotion and wrote a special letter to justice.” Arachchi re-applied and in 2007 in wife and children arrived in Ireland.

Arachchi spent eight years in Hayfield Manor but eventually had to leave due to muscular problems in his arm. After nearly three decades of preparing meals, he was suffering numbness in his hand and was advised by a doctor to undergo surgery and take a break from work. While in recovery from his injury, Arachchi made plans to open his own restaurant and in 2012 he opened Rooster Pil Pil in Ballincollig. He also began producing his own fusion sauces and curries, which were picked up by SuperValu through its food academy programme. Arachchi is now in the final weeks of setting up a small factory in Cork, which will produce the sauces in bulk.

“Running your own business is very hard, you have to sacrifice so much. You’re not getting any margin at the beginning. People say it’s delicious but you have to work so hard. I have to blend the sauces myself, cook them, bottle them and then take them to SuperValu. But now I’m going to make my own factory and in like two months’ time I’ll be able to provide five-six jobs.”

Arachchi says his family have settled well in Cork and that his children feel Irish now. “I’m happy here because my children are happy and they have a safe life. Of course I miss my country and my culture. There is a small Sri Lankan community here in Ireland so if we ever feel homesick we can reach out to them. But me and my wife are both content here.”