‘I love spending the day in the nursing home. It’s bringing me back to life’

New to the Parish: Vekash Manzoor Khokhar arrived from Pakistan in 2015 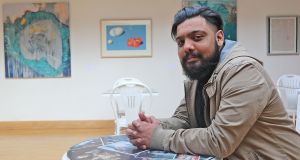 Vekash Khokhar at the Backstage Theatre, Longford. The space has become a lifeline for him. Photograph: Lorraine Teevan

Each morning for the past two months Vekash Manzoor Khokhar has set off to work in the local nursing home shortly after 6am. He knows Alice, a 93-year-old resident at the home, will be sitting near the entrance awaiting his arrival. Seeing her smile each morning has given this young man from Pakistan a new lease of life. After nearly three years in a direct provision centre waiting for a decision on his asylum application, he finally has a reason to get up in the morning.

“Alice is always there. She’s the only person up at that time and she sits alone in her wheelchair waiting. When she sees me coming she gives this huge smile and it makes my day.”

In February 2018 Khokhar, an intensive care unit nurse from the city of Karachi in Pakistan, finally secured volunteer work as an assistant carer in a nursing home near Longford town where he lives. When Khokhar arrived in Ireland seeking asylum in June 2015 he had immediately tried to find volunteer opportunities. However, after weeks of trudging around offices in Dublin, Limerick, Galway, Waterford and Longford he began to lose faith.

“I would ask people if I could get involved using my nursing skills through volunteer work but every time I was refused. They wanted a Stamp 4 and a visa, they wouldn’t allow an asylum seeker to work.”

“I read the newspapers and listened to the news and would hear about the shortage of nurses and that Dublin hospitals were crying out for nurses. I felt I should go down there and ask them if I could volunteer but then I’d remember how I’d been refused as a refugee. I had tried my level best to find work but they didn’t trust me.”

As the months passed, Khokhar realised he would be unable to work until the Irish Government accepted his application for asylum. Like many of the other men in the centre where he lives, he began to lose hope and slipped into the monotonous daily routine of sleeping, eating and watching TV.

“It was like I was in prison. There was no access to anything. Even if you walked down the street people stare at you like you’re an alien. Sometimes they’d beep the horn at us. But what could we do? It’s difficult to feel so alone as a human being you want to socialise with others.”

In mid-2017, after two years in the centre, Khokhar was approached one day by an Irish choreographer and theatre maker called Catherine Young who was looking for dancers for a project called “Welcoming the Strangers”. Young had travelled to the Longford centre hoping to find residents interested in taking part in a dance piece which told the story of migrants and refugees. She convinced Khokhar and seven others to sign up to the rehearsals in the local Backstage Theatre.

“At the beginning it was just about getting out of the centre and using our bodies. We thought we could do it for a while to keep fit. Before that we were just eating and sleeping which is not healthy.”

Khokhar quickly discovered a newfound passion for dance and in December 2017 he took part in the group’s performance in Longford town. “Catherine was our Messiah, I believe that. I had never danced before but she put me on stage and from there I started building back my confidence.”

Khokhar would practice his dance steps late into the night, often to the amusement of his three roommates. “I was doing rehearsals in my room from 11pm to 3am to make sure the piece would be good. My roommates had fun watching. Sometimes they’d say “look at the monkey jumping”, other times they thought I was going crazy.”

Through his participation in the show, Khokhar met a woman who worked in the local nursing home and after a number of requests, the manager of the home agreed to meet with him. They met for an interview where Khokhar spoke about his experience working in Pakistan. The manager agreed to take him on and the next morning he began his first shift.

As a volunteer, he does not have access to the residents’ rooms but helps in the dining and sitting area. “I talk to them and help the residents who can’t feed themselves and sometimes I play games with them. I’m enjoying being there. I go five days a week and work nine hours a day. I just wanted to get out of that place where I live.

“I love spending my whole day with the residents helping them, taking to them, making jokes and laughing. It’s bringing me back to life.”

Earlier this year, Khokhar heard a rumour that the Government was introducing new legislation which would allow asylum seekers to work. Under a new directive introduced in February, asylum seekers are now allowed to apply for jobs through the Employment Permits Act. Unfortunately, due to the restrictive measures of the system – including that asylum seekers must secure a job that pays a starting salary of at least €30,000 per annum and prevents applicants from applying for work in more than 60 different sectors – finding paid work is impossible for Khokhar.

He points out that most nursing graduates begin on a salary far below €30,000 per annum. “How does the Government think a person who has been sitting in direct provision for three years, five years, eight years, will be able to walk straight into a highly skilled, well-paid job?

“They gave us hope and happiness that something was going to change. Then they came back and said we have all these criteria so you won’t actually be able to work. You end up losing everything again.”

For now, Khokhar is very happy volunteering at the nursing home. “When I go to the nursing home I feel energetic and I never feel tired after work. I leave all my stress, my worries, my problems, outside the nursing home. For nine hours at least I can have a good life, good chats with the residents and good moments.

He continues to dance with Lynch’s company and hopes to work as a nurse in an Irish hospital one day. “All I can say to the people of Ireland is I’m trying to make a home here and if I can stay, I’ll be very lucky. And maybe the day will come when the Irish people will also feel proud to have a refugee like me working and living in their country.”