‘I can be very narrow-minded. I’m constantly fighting with myself to be a decent person’ 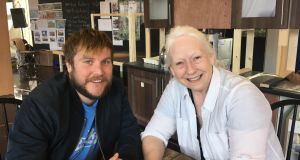 Marie: The older I get, the less I cry. I’d say it was a couple of months ago.

Peter: I’m a bit of an emotional animal, so apart from today…

Marie: You cried today in rehearsals.

What was the last gift that you bought?

Peter: It was a game of Snap as Gaeilge.

Marie: I bought a dress for my daughter in the sales in Marks & Spencer. It’s a beautiful blue dress. She didn’t expect it – it was on an ordinary day.

What’s your favourite destination to visit?

Peter: For me, it’s Rosslare, a place I’ve gone to for 30 years with my family on the same week every year. I proposed to Kim on the beach down there. You go down and eat for four days straight, have singsongs, swim in the sea. It’s a home from home. The kids can run around.

What’s your favourite item of clothing?

Peter: I bought a good coat about four or five years ago, in [Brown Thomas]. I saw a friend with a similar one in New York, and I had one I had bought for nothing and it was freezing, and his looked so warm. I came back and it’s the one time in my life I had a bit of money.

Marie: I’m going to say a pint of Guinness.

Marie: You’re absolutely right, it’s the only thing I like to drink.

Is there any artist you feel particularly connected to right now?

Peter: There’s a guy called Seamus Fogarty, an Irish singer-songwriter who lives in London and is from Mayo. I got into him listening to Cillian Murphy sitting in for Iggy Pop on BBC, and he picked out some amazing musicians.

Marie: I’m privileged to be in the company, occasionally, of a young piper called Sean McKeon, whose father is also a wonderful piper. I love listening to the way he plays the pipes. I wouldn’t have been a huge traditional music follower. My husband loves traditional music, but for years it didn’t mean anything to me. I’m slow glad that now it does.

Peter: I must look him up.

Marie: It’s like nothing else when you listen to a good piper. The traditional music scene is so healthy in Dublin.

Marie: I don’t have any.

Marie: I don’t approve, at all!

What do you wish you studied more in school?

Marie: I did my degree through Irish, but the English literature side of me was very much in need of developing. I got a lot of help in the Seventies from Garry Hynes and Mick Lally, who had both studied English in college. When we would discuss plays – I was 22 at the time – how they were written, why they were written, I got a great basis in the history of English literature. Every since then I’ve always wanted to study it.

Peter: I went to an all-Irish school. Being in Irish schools since the age of four, I’m not sure I would have had the confidence to go and study it.

Marie: I never thought about that before. I would say a hare. Something that gets startled in the headlights.

Marie: There’s a book I keep dipping into for years. It’s all raggedy now. John McGahern’s Love of the World. It’s the kind of thing you can dip into on the train and then leave it.

Peter: For me the one I always dip into is The Old Man and the Sea. There’s something about the connection between him and the boy, and I love the simplicity of the relationship people have with the sea.

What’s the worst advice you’ve ever been given?

Marie: There’s probably loads but I didn’t interpret it as bad advice. I remember when I started off as an actress that I didn’t have to go into an office. But when I’d be going in to do a show in the evening, all the nine-to-fivers would be going home with their dry cleaning and a bag of shopping, and it would be wet and raining and I’m going into the theatre to do a show, thinking, “ just want to go home and sit by my fire!”

Marie: My children. They’re both in college at the moment. I don’t worry so much, I just hope they get a grab on whatever it might be that makes them happy in the world. I’m preoccupied with that.

Peter: I’m the same. Just that they be happy. I want to make sure they get the same amount of love and support that I got.

What do you think is your most dominant personality trait?

Marie: If I were to be honest, I think sometimes I can be very narrow-minded, too judgmental too quickly. It’s probably a fear thing. There is that element to me, to jump in quickly and say “no”. I’m constantly fighting with myself to be a decent person.

Peter: I’ve got so many things that are bad!

Peter Coonan and Marie Mullen perform in Marina Carr’s On Raftery’s Hill, in the Abbey Theatre until May 8th. abbeytheatre.ie

My biggest lockdown mistake? Relying on TikTok as a co-parent
6