‘Dublin fellas will charge you an arm and a leg, especially when they see the likes of you coming’

Ingram is so much more than a mechanic to me. I ring him more often than I ring my mother 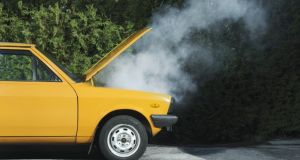 'I once drove all the way from Dublin to Ballaghaderreen with no exhaust.' Photograph: Getty

“Now Niamh, I just need you to lift the bonnet there and find the water pipe and give it a feel. Not the water bottle now, that could explode in your face. The water pipe,” Ingram says.

This was not the first time my car had failed me, but now, parked outside a house on the road between Longford and Ballinalack with the flashers on and the bonnet up, I had a feeling it may well be the last.

Those words – “you’ll have to ring Ingram” – send shivers up my spine.

Ingram – that is Stephen Ingram, from Co Roscommon – is so much more than a mechanic to me at this point.

I “ring Ingram” more often than I ring my mother. He talks me through how to limp the damn thing home in the most precarious of situations at the most awkward of times.

Can I drive it with no exhaust? An orange light is grand, ya? Will the engine explode if I keep driving with the temperature gauge up at 180?

This time it was 9pm on a freezing Tuesday night in January when I found myself ringing Ingram, for the fourth time that week.

I had attempted driving it home on Sunday night, when the old temperature gauge played its cunning trick just outside Lucan and went flying up to 180 in a matter of seconds.

Let it cool off and see how it is in the morning, Ingram said, when I rang him at 10pm.

Monday came and off I tottered, shades on and Kings of Leon blaring through the speakers. It was all going grand, until I got to Ballinalack and – BAM – there she goes again.

I occupied myself with shining the interior and hoovering the sand from the backseat that had been there since last summer. I actually had a lovely time

I parked at the petrol station and waited two hours for the temperature to go down.

That was okay though, because I occupied myself with shining the interior and hoovering the sand from the backseat that had been there since last summer’s Donegal beach trip.

There was a Supermacs there too. I actually had a lovely time.

I drove her straight to Ingram and he fixed what appeared to be the problem.

“Replace that car? Would ya goway!” I said to my mother when I eventually got home, five hours after leaving Dublin.

Okay, I know, I’d have been quicker on horse and cart, but there is nothing quite like the satisfaction of arriving home in a car that has so clearly given you all it has left to give.

Fast forward 24 hours and I would find myself right back in the Ballinalack Bermuda Triangle.

My hands were like icicles and my face had turned raw from the bitter rain that was coming at me sideways.

There is nothing lovely about Ballinalack when it’s dark and wet and Supermacs is closed. It is equidistant between Roscommon and Dublin, meaning no one can come save you and you can’t abandon the car and come back for it in the morning.

I’d have to ring Ingram.

We decided the only way to tell if the engine was actually overheating or if the gauge was playing puck was for me to go under the bonnet myself.

Ingram would have to talk me through it, kind of like in the movies when some army crack team has to talk their agent through cutting the right wire to make a bomb safe - black, green or red wire? Water pipe or water bottle?

I videocalled my brother for back up so he could guide me to the right pipe, but then my phone died. Class. Now I can’t even ring Ingram. And Supermacs is closed.

Seen as I hadn’t a bloody clue where to find the water pipe now, I just felt all of the pipes. Ingram said if they were bubbling hot then it was actually overheating, and if not it was okay to drive. They were all lukewarm.

I could have kissed a stranger with the sheer delight of it.

It occurred to me then that I could have sought the advice of another mechanic, one based in Ballinalack or – god forbid – Dublin.

But I don’t think they’d let me in the door down at home if I betrayed the sacred loyalty to Ingram. I once drove it roaring all the way from Dublin to Ballaghaderreen with no exhaust, just so Ingram could fix it. Nobody batted an eyelid.

“Them Dublin fellas will only charge you an arm and a leg, especially when they see the likes of you coming,” was the advice offered to me at home.

Maybe they have a point, but either way, I don’t see any Dublin mechanic taking my phonecalls at 11 on a Tuesday night and giving me an impromptu engine run down.

You’d have to ring Ingram for that.