Did Ancient Greeks tell each other that wine is citrusy on the nose but with a grassy taste? 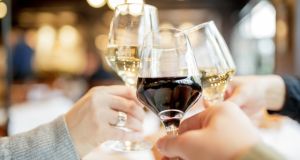 One of the reasons wine is nice is because it contains alcohol. Photograph: Getty Images

A while ago I was given a set of wine glasses. Not any old wine glasses: Riedel, which are highly prized by the wine geekeratti. This is because they are specially designed for the consumption of wine. Yes, seriously . They come in a variety of sizes and shapes, each one corresponding to a particular grape so you can maximise the aroma and intensify the mouthfeel. If you’re quaffing a divine Pinot, you don’t want to desecrate it with some tat from Penneys.

Wine isn’t the only form of alcohol with a glass obsession. Craft beer has an even wider range of drinking systems, and in Belgium, the mothership of craft beer, it’s all taken with a religious seriousness. Hundreds of beers with hundreds of specially made glasses. Kwak, for instance, should be served in a tall glass that comes with its own wooden stand. The stand, apparently, prevents spillage if you’re having your beer in a horse-drawn carriage.

These glasses have become so prized that some Belgian establishments now demand a deposit – one of your shoes – before they will serve you.

Now I love all this stuff. And I do love wine. But occasionally I have a dark night of the soul when I wonder if it’s not all utter guff. Yes, people have been drinking wine for thousands of years, but did they always fetishise it the way we do now? Did the Ancient Greeks sit around telling each other that this one is citrusy on the nose but with a grassy taste? How can you describe a wine as tasting grassy when most of us have never eaten grass?

My doubts come, at least in part, from the paranoid age we live in. Potentially, everything is Fake News or even worse, marketing. It could be that there’s not that much you can really say about wine, so they have to make up stuff. It could be that any red wine goes well with steak. It could be that the variations in taste are only apparent to the genetically gifted, taste bud-wise. To the rest of us, wine tastes like wine. I once had a Château Latour with a snack box. Both were fabulous.

And wine has to come with a story: of how it was made, but also the story of how you will consume it. You’ll have it with a fabulous meal and 10 of your closest friends, all of whom adore you. Or you’ll have it on the terrace of your Tuscan villa as you gaze down at the russet valleys, and beyond that, the orange sun slipping into the cobalt Mediterranean: an experience so transcendent that you’ll finally know the true meaning of the word grassy.

Wine is no longer a nice drink that you have with your dinner. We have sacramentalised it so much, laden it so many associations that it fires all sorts of non-taste neurons in our brains. Drinking wine has become a ritual: popping the cork, swishing around your Riedel bowl, sniffing, sluicing, drinking.

All this for what is effectively a booze-delivery system. One of the reasons wine is nice is because it contains alcohol. (Non-alcoholic wine often starts life as normal wine, but is boiled to extract the alcohol, most of the taste and all of the joy). No other drink has anything like this level of ritual or emotional resonance.

The closest comparison I can think of is smoking pot.

Like wine, cannabis comes with a vast range of paraphernalia, a huge number of varieties with varying effects, and a philosophical attitude towards its communal consumption. People have been smoking it for thousands of years. And they do know what grass tastes like. Your average wine buff is a middle-aged stoner, dude.