The Minister asked ‘Where are you from?’ I said ‘Portugal’. He said ‘You’re Irish now’

Vitor Ferreira arrived from Portugal in 2002 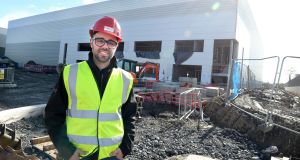 Vitor Ferreira had spent less than four months in Ireland when he travelled home to Portugal for his Christmas break. He left his hometown near the northern coast of Portugal in August 2002, during the height of summer when all his friends and family were busy enjoying the hot weather and spending time at the beach.

“I was still young, only 23, and all I could think about were my friends and what they were doing. August is when everyone takes their holidays, when all the parties are happening. All of a sudden I arrived in Ireland where it was so much colder. Then the winter came and working in construction in the rain and wind, I felt miserable. But at the same time I didn’t want to be defeated.”

After nearly a fortnight over Christmas surrounded by family near the town of Oliveira de Frades, Ferreira felt desperately sad to be leaving his loved ones behind. “Even when I think about it now all these years later I can still feel the pain from that time. Back then there were no direct flights so I had to go via London and wait for hours in the airport. That whole journey was so traumatic, I arrived back in Ireland with a heavy heart.”

Ferreira had been working in a local factory for five years before he left Portugal in 2002. He walked straight from his final school exams into a job in the factory and enjoyed earning his own salary. “I was 17 when I started and I was able to buy my first car with the money I’d earned. I’d be driving around the countryside enjoying my youth.”

Shortly before his 23rd birthday Ferreira mentioned to his cousin, who had been living in Ireland since 1998, that he was thinking of moving abroad. “Something triggered inside me. I was five years in the job and felt settled but I wanted to do something different. If I ended up staying in that job I’d probably be happy but I wanted to know the world a bit.”

His cousin was working for a construction company in Dublin and said he could find Ferreira a job. “At that time Ireland was booming and they could basically hire people from the gates. Because my cousin had been working at Collen Construction for years, it was a good reference.”

Ferreira decided to give Ireland a try but shortly before his departure he began to reconsider his decision. “All of a sudden I had doubts. It’s one thing saying you’re going to move but when the opportunity arrived I started to get cold feet. I had never lived abroad before, I hadn’t even lived away from home. I was still at home with my parents. But they were very supportive and said go, it’s a great opportunity. My mother regretted that later, she never thought I’d be gone for so many years.”

Before moving to Ireland Ferreira had never worked on a construction site and only spoke basic English. “Honestly the Irish accent was tough to understand at the beginning because I was mostly used to American accents from movies.

“The only construction I’d done was helping my father build his house when I was a teenager. It was a tough job and a big change for me. I came from a factory setting where you’re working under a roof. All of a sudden I was exposed to the elements doing outdoor, difficult work.”

Ferreira started out doing simple tasks like shovelling and sweeping around the construction site. As time went on he developed his skills and began to specialise in certain areas. In 2008 he started to consider returning to his studies in Portugal so he could up-skill and develop an expertise. However, the economic crash put a stop to those plans. “All of a sudden the recession was happening and no one was sure what was going to happen. Portugal wasn’t an option anymore and I didn’t know if I was going to lose my job. Luckily I didn’t but because I never got laid off I stayed in my comfort zone.”

It’s been an incredible journey. I consider myself Portuguese-Irish now

It wasn’t until 2014 that Ferreira followed through with his plans of applying for college and completed a certificate in health and safety followed by a diploma through night classes in Dublin. “I always had an interest in health and safety and because of all the training I’d received over the years I knew what could happen when things went wrong. I felt studying was the only way I could develop my career. If I could study about safety and save someone’s life, that would be worth it.”

He also became an Irish citizen in 2014. “There was so much paperwork involved but it was all worth it in the end. I thought it would be a good idea to get Irish citizenship because it could help me get more opportunities. I went to the Convention Centre for the ceremony and shook hands with the Minister for Foreign Affairs. He asked ‘where are you from’ and I said ‘Portugal’. He said; ‘you’re Irish now’ and that felt good.”

Ferreira now works as a junior health and safety officer for Collen Construction. “I like that each day you never know what to expect. You’re hoping for the best and that nothing major will happen. But it’s really challenging trying to change people’s mentalities about safety.”

He lives in Dunboyne, Co Meath, and returns to Portugal three-four times a year to visit his family. “The only thing that would make me move back would probably be my parents because I can see them ageing. I can see the difference year after year. My sister still lives nearby but she doesn’t replace me, just like I can’t replace her.”

Ferreira says he has no regrets about his decision to move to Ireland 16 years ago. “It’s been an incredible journey. I consider myself Portuguese-Irish now. When I go back to Portugal I feel a bit strange at first but after a few days I settle in and leaving can be hard. But I do look forward to coming back to Ireland to my own space. It’s home.”