Paddy Logue: One problem solved but Fenton now needs a gagging order to stop him chewing everything in sight . . . we know the very man to sort that out 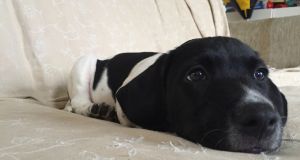 Fenton is small bundle of loveliness who came into our lives a few weeks ago. Photograph: Paddy Logue

I am forever indebted to businessman Denis O’Brien.

Really? I hear you ask quizzically. Did he make you an offer you cannot refuse to head up a small magazine based in the Caribbean specialising in reviewing reconditioned vintage BMWs? Afraid not. Did you wake up one morning to find a note pinned to your front door that read: “Dear Paddy, I heard you needed a new car. So I decided to buy you a Tesla. It’s parked outside. Don’t forget to charge her up. Enjoy, kind regards, Businessman Denis O’Brien”? The answer to that question is also, of course, no. Media moguls have enough to be doing besides turning favours for the likes of little ole me.

However, Mr O’Brien has been helping my dog Fenton sleep at night and the billionaire doesn’t even know it (unless somebody else told him). And as I always say, if you do my dog a favour, you do me a favour. It’s the law. So, thanks Denis, I owe you one. Regards Journalist Paddy Logue.

You see, Fenton is small bundle of loveliness who came into our lives a few weeks ago via a surrendered and very pregnant dog which gave birth to a litter of pups in Dogs Trust, Finglas, on February 18th. He is just so lovely, it’s almost beyond words but check my Instagram account if you don’t believe me. He’s a cross between a mongrel and another dog, identity unknown. All we do know is that he has big floppy ears, enormous webbed feet and black dapples on his cutesey little legs.

Fast-forward to his first couple of nights with us. Everything had been prepared in advance – a new bed had been purchased in Aldi, an old cot blanket no longer required for human pups put in place, various toys placed to one side of the bed, Tadgh’s old pillow washed and plumped up in his memory to the other side. Fenton takes one look and tries to jump up on the sofa. His little legs are still too short but there’s help at hand. And don’t worry about the couch – it was purchased a few years ago from a former Irish Times news editor for €70 and had been covered with an old throw. The stove has been lit and the food bowl filled with 80g of nutty meal three times a day. All good. Everyone’s delighted and Fenton seems to like his new home.

That is, until about 11pm on day two when the crying began. Turns out nobody explained to Fenton that when he was taken away from his mother and three siblings he would not be seeing them any time soon. One night was probably okay, even an adventure, but by day two things seemed to be feeling a little more “kidnappy”. What is a little puppy dog to do only scream out for his pack to come and rescue him? And scream and cry he did. And the more we resisted the urge to go down and rub his silky little head, the more the death screams continued. It went on for hours, so much so that next door were forced to politely point out at about 2am that his cries were travelling up the chimney cavity and escaping into their house. God bless his little lungs. Eventually, with an alarm clock in one hand and an old duvet in the other, I ventured downstairs to spend the rest of the night with Fenton on the former news editor’s couch.

How could we put up with another night of this?

This is where Denis came in, and as I say we are pretty sure there is absolutely no way the telecoms magnate could have come to know about this in advance. He may never know just how helpful he has been. As night three approaches, furious Googling of “my puppy won’t stop crying at night, help!” and “how to stop your pup keeping you awake at night” gets into full swing. We discover that the little pups like to hear the sound of human talking as they nod off and that leaving a radio on in the room where they sleep is a great help in keeping them quiet and you in your own bed. There was nothing for it but to crank up Communicorp's Newstalk, or DOB 106FM as we call it, beside Fenton’s couch. And hey presto, everyone has been sleeping like a very well-behaved baby ever since.

Naturally, one problem solved is merely an opportunity for another one to make itself known. The latest is that little Fenton, like a teething wane, is given to chewing anything at all really. He took on the kitchen table the other day and would definitely have eaten the whole thing if he could have got his chops around it. A bit like a python but cuter. He’s done his worst with everything from shoes to branches off trees to pieces of briquette and I saw him sizing up the leg of a Queen Anne chair the other day.

We now think it is time Fenton is slapped with a gagging order, and we know the very man who can sort out one of those for us.