Why am I so interested in refugees? I am descended from emigrants

New To The Parish: After over 100 articles in this series, Sorcha Pollak revisited 14 stories for her book 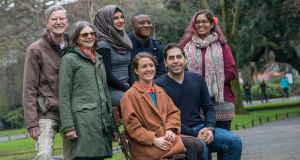 New To The Parish author Sorcha Pollak, centre, with James and Ellen Baker; Maisa al-Hariri Azeez Yusuff; Chandrika Narayanan Moham; and George Labbad, all of whom tell their story of moving to Ireland. Photograph: Brenda Fitzsimons 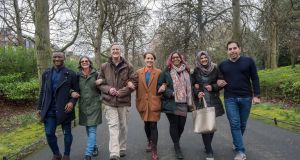 I can’t remember the first time I heard the word “refugee”. It was a term I was always aware of growing up, a label intricately connected to my own family’s history and tied to a man I never met. My grandfather was 34 years old when he arrived in Ballymena, Co Antrim, from Czechoslovakia in 1948. He had never been to this country and, before meeting my Northern Irish grandmother, had almost certainly never cast a glance towards this small island on the outer fringes of western Europe.

When I was 17 I read the book Stephen Pollak wrote about the decade leading up to his move to Ireland. I immediately felt drawn to this elusive Jewish, left-wing grandfather who had died nearly a decade before my birth. What was it like to abandon his career, friends and family in order to find a safe place where he and his wife could bring up their son (my father)? How did it feel to arrive on the doorstep of a conservative, Presbyterian Northern Irish family and move into a community where he was labelled as “the European”? Was he rejected or accepted, welcomed or ignored?

In recent years, people have often asked why I express such interest in the lives of refugees. Like nearly every Irish person, I am descended on my mother’s side from emigrants (from Cork) who left for the United States. However, I am also the descendent of an immigrant – a person with nowhere else to go who came to this country as a refugee. I have grown up with the awareness that had my grandmother’s Northern Irish family not welcomed my grandfather, the future of my own family could have turned out very differently.

Three years ago this June I began writing the weekly New to the Parish series about people who have moved to Ireland. Even though the inception of the series coincided with a barrage of reports about asylum seekers moving en masse towards Europe, New to the Parish did not happen because of the migrant crisis. The idea stemmed from the increasing diversity in Irish society that has developed over the past 15-20 years. It was also intertwined with a personal desire to understand the fears and reservations my grandfather must have felt during his initial years of exile in Northern Europe.

Each week I would meet a man or woman, couple or family, who had chosen to make Ireland their home. Some had come to Ireland for work; others for education; some retired here; others fell in love with an Irish person. Some came here out of necessity, forced from their homes by death and destruction. But they all had one thing in common: they were all migrants. As I compartmentalised these people’s lives into short, thousand-word editorial snapshots, my train of thought would invariably float back to the grandfather I never met.

Last year I was offered the chance to turn New to the Parish into a book. By this point I had relayed the stories of more than 100 immigrants through the pages of The Irish Times. However, I initially felt anxious that returning to a small group of these people with the request that we delve deeper into their life experiences could be viewed as insensitive or intrusive. I need never have worried. Each of the 14 individuals, couples and families I approached to be part of the book immediately agreed. Even those who had expressed reservations and hesitance on our first meeting welcomed me back into their lives to discuss the challenges and barriers they encountered on arrival in this country.

Over six months I travelled around Ireland jotting down stories from men and women from across the globe. There was the young artist from Iraq who after 14 years in this country identifies as a Balbriggan native; the Syrian student who came to Ireland in 2006 to learn English and study hotel management; the Nigerian football enthusiast who followed his parents to Ireland after they spent years in the direct provision system, dreaming of a better future for their two young sons; the Rohingya family who arrived in Ireland stateless after more than two decades of persecution in Myanmar and Bangladesh; the singer from Cameroon determined to build a life for herself in Sligo town; the Venezuelan journalist forced to retrace the footsteps of her Italian grandmother back to Europe, fleeing the violence and instability in her home country; and the Birmingham couple who finally found warmth and acceptance in a small Wexford community.

Writing the weekly Irish Times New to Parish series, I sometimes struggle to edit a person’s life story into a short, succinct half-page article. However, with the book I was allowed the freedom to fully engage with the 14 stories in what I hope has resulted in a respectful, honest and insightful discussion around migration. Our conversations were often challenging – speaking about a rickety boat crossing the Mediterranean or parents left behind in an overcrowded Bangladesh refugee camp is never easy. But the result is a collection of tales of the human capacity to overcome adversity. For some it was the challenge of finding a home, for others it was settling into a job or securing a visa. For most, it was learning to live with the pang of loneliness being so far away from loved ones.

In recent years our social media accounts and daily newsfeeds have often filled with fractious, hateful, anti-immigrant rhetoric that seeks to divide human beings between “us” and “them”. It’s easy to forget the humanity behind the statistics when so many media outlets and politicians are fixated on creating an atmosphere of fear around foreigners.

My hope is that the New to the Parish stories and book can serve as a reminder of the common strands which bind us together so that we can have the confidence and compassion to open our doors to new arrivals, like my grandfather exactly 70 years ago, and truly live up to our reputation as the home of céad míle fáilte.

New to the Parish: Stories of Love, War and Adventure by Sorcha Pollak is published by New Island Books and is in bookshops now.