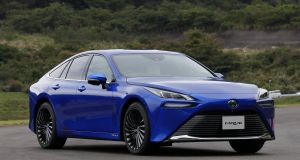 After decades of false dawns, the hydrogen age may be upon us. At least that’s the case being advocated by Toyota, which has launched a vastly improved new generation of its hydrogen-fuelled Mirai.

It’s heralding the new family car with the same evangelical zeal that it had when the original Prius was launched, putting hybrid on the map in the early 2000s.

The hybrid gameplan doesn’t quite fit hydrogen, however. For a start, the alternative fuel source needs a supplier and a refuelling network. And while Tesla was willing to step forward and fill the gap when it came to superchargers for electric cars, Toyota is unwilling to match that level of commitment to the new hydrogen age. So Mirai motorists are at the mercy of third-party hydrogen suppliers.

As to the car itself, it’s a big car, measuring in at nearly five metres long. Its engineers promise a 30 per cent improvement on range compared to the current model and a 10 per cent improvement on fuel economy. So with the current car achieving 502km from a full tank and 3.6 l/100km, that would put the new car at over 650km on a tank, with a fuel economy of close to 4 l/100km.

To complicate matters, hydrogen is costed by the kilo, so converting the figure for the current model you get 0.76kg per 100km. With improved consumption of the new Mirai – and with a kilo of hydrogen costing about €10 at present – that would mean €7 for a 100km drive. In contrast, the current Prius would cost €5.81 in petrol for the same trip. And it would cost €5.33 in a Honda Civic diesel. Or just €3.75 in the new all-electric VW ID.3.

It’s hoped that hydrogen prices will drop if it becomes mainstream, and the real upside of hydrogen, of course, is that it’s zero emissions in terms of CO2 when it’s running.

However, while hydrogen is a plentiful chemical element in the universe, there is virtually no hydrogen gas on Earth as our gravity is so weak that essentially all our primordial hydrogen – except that which bound itself into heavier compounds – escaped into space billions of years ago.

So hydrogen fuel must be “manufactured” by extracting it from other compounds, like water and methane. At present, that’s done by using fossil fuels, estimated to be responsible for 90 per cent of hydrogen production.

Hydrogen is not a source of energy, only a way of storing and transporting it. Therefore it offers the opportunity to be a storage device for unused renewable energy from solar and wind sources. That would also remove the CO2 issue from its production.

The major hurdles blocking hydrogen adoption in the past were safety, cost and supply. Safety no longer seems a major concern and cost is being tackled, so the real challenge is supply.

Hydrogen’s real strength is in the commercial market, fuelling buses and trucks that can’t run efficiently on battery electric power. Already hydrogen buses are being developed and one is being tested in north Dublin.

As for cars, Toyota Ireland plans to have as many as 30 demonstrator models on our roads by 2023, with three hydrogen filling stations in operation around the Dublin area by then. There are no price details at present, but hydrogen cars are not cheap, so leasing seems the most viable way for companies to join the new hydrogen age.

While it seems very likely to be the answer to future fuel needs for buses and trucks, it remains to be seen if this really is the new dawn for private motorists. It might take another generation or two of Mirai before that day is reached.