Audi mixing batteries and cylinders in one factory 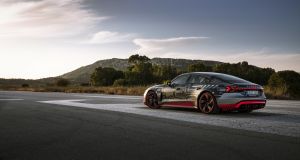 Audi’s Formula-E racing driver Lucas Di Grassi has been testing the e-Tron GT during development and is very enthusiastic about it. ‘The car’s grip and precision in cornering are definitely very impressive,’ he told The Irish Times.

You couldn’t get more of a traditional performance car right now than an Audi R8. A hip-high, ground-hugging shape. Two seats. And 10 cylinders creating both rapid acceleration and a banshee wail, mounted in V-formation just behind the driver. It’s recipe for excitement that has been current since the sixties.

Now, though? That currency is fading. The R8 isn’t being phased out of production just yet, but it has been joined, on the same production line at Audi’s Böllinger Höfe factory (just across the river Neckar from Audi’s bigger Neckeralsum plant, southeast of Heidelberg) with the new e-Tron GT, the second of Audi’s all-electric models, and the first to be built in Germany (the e-Tron quattro SUV is built in Belgium, you see).

While the two cars could hardly be more different in their layout – one is a mid-engined supercar, the other a low-slung four-seat, four-door fastback, powered by electricity – there’s enough similarity that they can both be built in the same plant, by the same mixture of robots and technicians. Both use a mixture of aluminium and high-strength steel to keep their body and chassis as light as possible, in pursuit of both speed and efficiency. And both are rocket-ship fast.

How fast? Well, light up the R8’s 5.2-litre V10 engine and it’ll rip to 100km/h in about 3.6secs. The e-Tron GT will likely demolish it, though. In spite of being bigger, roomier, and more luxurious, the most powerful RS 640hp version of the e-Tron GT will probably do the same sprint about half a second faster – Audi hasn’t yet released official performance figures for its new electric flagship, but it uses basically the same underpinnings as the Porsche Taycan, so we can infer from that a fairly devastating level of acceleration.

Audi has been letting its star Formula-E racing driver Lucas Di Grassi loose with the e-Tron GT during it’s development, and while he’s clearly paid to say nice things about Audis, his enthusiasm for the new electric weapon shines through.

“The car is fun!” Di Grassi told The Irish Times. “Obviously, such a Gran Turismo is totally different to a race car. Even so, there are plenty of parallels, especially the powerful acceleration which, just like in our case, is fully available for a long time. What I particularly like is the car’s handling. Well, you’re saying that, as a Gran Turismo, the car also has to deliver good ride comfort. For me as a race driver, that’s not such a key characteristic. But I must say that the car’s grip and precision in cornering are definitely very impressive.”

According to Dennis Schmitz, one of the senior development engineers for the e-Tron GT, the secret to reliably extracting that kind of performance is cooling. “In the e-tron GT, we have two coolant circuits for the technical components operating on different temperature levels. The cooler one controls the temperature of the high-voltage battery and the warmer one serves the electric motors and power electronics. Plus, there’s a cold circuit and a heating circuit for the interior” he told The Irish Times.

“The cooling of the high-voltage components under high loads and the cooling of the battery during fast DC charging processes are, no doubt, the most sophisticated ones. After all, we reach output levels above 270 kW here that generate quite a bit of heat.”

When the car travels a longer distance with active navigation, the e-Tron route planner issues suggestions of where to charge the battery

Jaan-Mattes Reiling, from the Audi Sport side of things, chimes in to underline that performance while charging is at least as important to electric car buyers as performance under acceleration, or cornering.

“Prediction is important in our case, too, albeit on a different level. We use a special functional feature to ensure that the driver can charge the battery with utmost capacity during a trip. When the car travels a longer distance with active navigation, the e-Tron route planner issues suggestions of where to charge the battery. About half an hour before the car arrives at the selected charging station, the thermal management system starts adjusting the temperature of the battery to precisely match its state of charge and the charging station’s capacity” he said.

Will customers, used to the wail and gnash of the mighty V10 and V8 engines previously essayed by Audi in its RS models, turn to the electric likes of the e-Tron GT? Well, they won’t really have a choice – Audi, and its RS sub-brand, is heading for batteries come what may.

“Electrification is the foundation of our future. And it will be a thrilling experience for our customers. The Audi e-tron GT is a highly desirable flagship for the brand and the basis for our first fully electric high-performance model,” said Julius Seebach, managing director of Audi Sport. “The production-based Audi RS e-tron GT is a milestone for us. It it paves the way into the all-electric RS world and it is our commitment to the company’s CO2 target. The Audi RS models are Audi’s sportiest and most desirable models with the most powerful engines, maximum dynamics and huge driving pleasure – all combined with uncompromised everyday usability. With the Audi RS e-tron GT prototype we’re translating these Audi RS attributes for the electric era. This is a revolution at Audi in the high-performance segment.”

Audi has decided that a mere electric hum is not good enough for its new flagship, and so has developed the `e-sound'

While we wait for Audi to finally peel the camouflage tape off of its new battery hot-rod, we can say that this is one electric car you will hear coming. Audi has decided that a mere electric hum is not good enough for its new flagship, and so has developed the “e-sound” – artificially generated by a big loudspeaker mounted in the front of the car.

Audi’s “sound designer” Rudolf Halbmeir said: “In principle, the sound of a car has much in common with music. To find the basis for the sound of the e-tron GT, I tried all sorts of instruments, from the violin to the electric guitar all the way to the didgeridoo, a wind instrument from Australia. But none of them were really suitable. Then I came across a piece of plastic pipe lying in the garden, it was three-metres long and had a cross-section of 80mm. I attached a fan at one end and listened to the sound coming out the other end. It was a very specific, deep growl and I knew straight away that I had discovered the foundation of the sound.”

What does it sound like? Well, think of a cross between a jet-turbine and a very refined, slightly distant V8 petrol engine. It’s actually pretty enticing, and if you saw the Avengers: Endgame film you’ve already heard it – Tony Stark (as played by Robert Downey jnr) drives a prototype e-Tron GT in one scene, and you can hear the distinctive noise.

Will the e-Tron GT prove as big a hit as an Avenger’s film? We’ll start finding out in 2021…