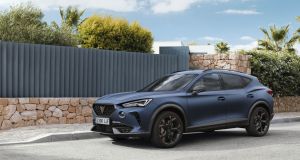 There have been a couple of rejigged Seats carrying the Cupra badge recently, this is first model designed and built specifically for the new brand. They’re off to a great start.

I came to this Cupra as a cynic. The very idea of this sub-brand seems a sales strategy straight from the bluffer’s guide to creating a car brand.

Following the formula spelled out in the auto industry playbook, the Spanish wing of the VW Group took what has become an impressive hot hatch reputation on the back of Cupra variants of its model range, and spun it out into a separate brand.

To industry insiders, it probably seems worth a punt. And you can see how turning a model into its own brand can work. Just look at Mini or Range Rover, for example. However, consider also the DS range at Citroen. French executives say it’s a slow-burner, but so far it has failed to make much of an impact outside of France.

And to the general public, who don’t spend their waking hours keeping abreast of the ever-changing automotive landscape, it only really works if the variant is something of a household brand already. Beetle, Golf, Santa Fe or even GTi. But Cupra? I don’t think I’m being too mean on the Spanish brand to say that it most likely means nothing to most Irish motorists. And the new logo doesn’t really help: a cross between something from the freemasons and a pair of forceps. Perhaps its target market is Masonic gynaecologists.

Being niche is all fine and well, so long as the boardroom executives and investors know what that means when it comes to the bottom line.

Yet the chef who cooked up the Cupra strategy has been shown to have the recipe for success in the past. Luca de Meo was driving force behind the Fiat 500 revival many years ago. He went on to sprinkle some of his magic at Audi before landing up in Spain tasked with turning around the troubled Seat brand. We are only now seeing the fruits of his labour. More recently poached by Renault to take over the helm in the wake of the Carlos Ghosn scandal, his legacy at Seat can be seen with Cupra.

While there have been a couple of rejigged Seats carrying the Cupra badge recently, this is first model designed and built specifically for the new brand. They’re off to a great start.

The car itself is surprisingly impressive. Admittedly the first two words you encounter with this car, “coupe crossover”, curses it to be greeted by much eye-rolling – the combination of shunting a high-set hatchback with a sleek coupe.

Most car companies end up with a motoring mess: something that has none of the dynamics of a coupe and none of the practicality of a crossover. Think BMW X4 or X6.

However, somehow, Seat has pulled it off. Admittedly, the low-set nature of this car does make you question the claims to any crossover DNA but if the wider haunches and slightly higher roofline is enough to persuade a few fundamentalists that it’s a quasi-SUV then who are we to argue. The facts of the matter are that this is a great looking well-built hatchback that in the VZ guise we tested, offers a nice bit of performance poke to match the looks.

Pricing does take a little bit of the lustre of the Formentor. Starting at €35,945 for a 1.5 litre TSI 150bhp, that’s a hefty price for a glorified hatchback carrying a badge that has no credentials other than its association with the mainstream Spanish offshoot in the VW Group. The same engine in the equally impressive new Leon starts at €26,710.

When it’s range is complete, the Formentor will be available with five powertrains, including two high-performance plug-in hybrid versions. This line-up will be split in two: those below 245bhp and those above it, which will be classed as VZ versions. So in many ways the VZ moniker becomes to Cupra what Cupra was to Seat. Confused yet? Along with a pricelist, they may need to publish a brand map.

In terms of pricing, while the Formentor starts at €35,945, the price walk-up to the 2 litre 310bhp all-wheel drive version I tested climbs to a very heady €57,910. That’s more than several iterations of the impressive new Audi A5 coupe.

True, 310bhp is a lot of power to have on tap: just 10hp less than the new Golf R, the pinnacle of that model’s range, which is €4,000 more expensive. And that power is smoothly delivered: never too lairy, though depending on settings, certainly loud.

This Cupra comes with five driver settings: comfort, off-road, sport, Cupra and an individual setting that lets you configure various items from that lot. So you can have comfort steering, with sport ride and Cupra engine noise. As you can imagine “Cupra” is a more engaging setting than even the usual sport.

But there’s more: for Spinal Tap fans, you can go to the Dynamic Chassis Control menu and turn it up to 11. You can move the gauge beyond Cupra into unnamed realms, where it feels like the suspension has been removed entirely and you’re simply riding on metal struts. It’s unusable in daily driving but fun to see how far technology is letting engineering hand over the car set-up to the owner these days.

Something similar, but far more artificial, is on show with engine noise. At the click of a switch this smooth, refined 2-litre begins to gurgle and roar. It even sputters between gear changes. Hit the touchscreen again and it’s like a different car. It challenges your perception of reality. At times you have to wonder which engineers are more responsible for the final car; the folks who work the metal or the ones who write the software code.

For all the cynicism at the start, my short time in the Formentor was full of fun. For a start, it’s a great looking car. It’s good practical space for a family, but the styling touches that give it a little more menace than your average copycat crossover.

The cabin is evidently detailed to take on premium rivals, being well-built and very well detailed. Controls are easy, the seats comfortable and cosseting. You sit rather low in the car, so it’s certainly less of a crossover in this sense.

As mentioned already, in performance terms, the power is delivered smoothly and there’s certainly enough under your right foot at all times to reassure you that you can overtake most obstacles. But it’s never hardcore, unless you engage the most extreme suspension settings.

The biggest hurdle I see is price and brand recognition. Both are intimately linked. Will people pay premium prices for a car from a brand they either don’t know, or associate with a mainstream range that often trades on value for money? On that I’m less convinced. But on the car itself, I think the Formentor is a bit of a star, and if this is what’s to come from Cupra than I’ll happily park my cynicism and look forward to the road ahead.