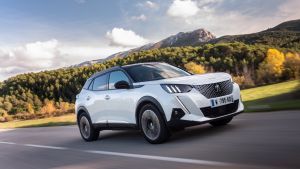 Striking: the Peugeot e-2008 wins big in terms of styling

It’s beginning to feel very normal. For a long time, test-driving electric cars still felt a bit weird, what with the lack of combustion commotion, the idea of “refuelling” at home (or, in my case, in a dingy retail park on a public charger), and the mildly smug sensation of whooshing around while emitting no (localised) hydrocarbons.

At this point, though, it’s getting to the point where any electric car that comes in for testing duties is, essentially, just another car. One that gets its go-juice from the ESB rather than Shell, admittedly, but a car nonetheless. And that makes things slightly more difficult for the electric cars – they have to compete on a level playing pitch now, with less of the early-adopter, isn’t-it-all-so-exciting novelty.

Indeed, this Peugeot e-2008 actually uses the same electric motor and battery stack of the e-208 (and for that matter the Opel Corsa-e) that we’ve also recently tested, so much as we so often drive different cars that share a common engine or gearbox or platform, so too it’s now the case for electric cars.

Mind you, the e-2008 is getting off on the good foot in that sense because this battery and motor setup is an impressive one. The battery stack, all located under the floor of this compact crossover, can store 50kWh of energy, and the electric motor, with its 136hp and maximum possible 300Nm of torque, mean that you can mix reasonable performance with reasonable one-charge range. Well, mostly. . .

We’ll come back to that in a tic, but first off let’s acknowledge the efforts of the Peugeot design team, who took the faintly bland previous-model 2008 and replaced it with this, a car whose angular styling is so aggressive that it’s like being slapped in the face with a bag full of set-squares. Our test car was in GT-Line trim, so came with rather lovely 17-inch “Salamanca” alloy wheels (in a dark paint with a diamond-cut finish) and a contrast black roof. The “Elixir Red” paint looks rather good too, and the fact that the electric version gets some body-colour elements in the deep grille adds to the visual pantomime. It’s maybe not pretty, but it sure grabs your eyes and refuses to let go.

It’s the same story inside, where the dash design has had a bucket of angles thrown at it and then someone’s come along and covered it all with some fairly high-quality plastic, some interesting carbon-fibre effect panels, and some natty acid-green contrast stitching. You’ll either love or hate the low, small wheel and high-set instruments of the current Peugeot cabin layout (some complain that they can’t both get comfy and see the instruments properly, but for what it’s worth this correspondent quite likes it all) but space is decent, comfort is good (great seats), and overall quality levels are very high. A shame that the big touchscreen is way too fiddly to use, but I guess you can’t have everything.

It certainly seems that you can’t have both space and range, that’s for sure. The lighter, smaller, e-208 has a rated range of 340km on one charge, and even if you’re putting in some motorway miles (always the worst thing for an electric car as there’s little braking to help recover some of the lost energy) it should put at least 280km between plugs. The e-2008, a little bigger, a little heavier, a little less aerodynamic, is less well off. Driven around town, or on country roads, and it manages to get close to that promised 310km figure, but if you take it up on a motorway, you’re looking at a best-case of 200km, and effectively less than that as you’ll want to keep something in reserve.

It means that city-to-city runs, which are entirely doable and fairly relaxing in the e-208, are a little more sweaty-palmed in the e-2008, and require rather more in the way of careful planning. Or just a little bravery when it comes to committing to getting there as the range-needle starts to plummet. At least the built-in 7.4kW charging system means you can nab a quick charge with decent haste when you need to.

It’s a bit of a shame, though, as the e-2008 is in all other respects a very good cruising machine. A combo of those seats, a comfy ride quality, and good refinement means that it’s less than tiring on a longer journey. It’s not as much fun as the e-208 when you get it to the twisty bits, either. Possibly that’s because you’re subconsciously holding back, to preserve what range you have, but the steering feels a little lighter and less enthusiastic than that of its smaller brother. Equally, the 2008 (whether powered by petrol or electrons) is well behind the curve set by the new Ford Puma when it comes to driving enjoyment. At least it’s practical, with a very useful 434-litre boot and clever packaging means that the batteries don’t encroach on that.

PSA Group’s decision to go with commonality across its compact electric models makes a lot of sense. It allows both Peugeot and Opel (and eventually DS and Citroen too) to offer a multitude of models with a choice of powertrains, allowing the customer to pick and choose what works best, and equally bringing down production costs because all the cars are using the same basic bits. The e-2008 does rather demonstrate the downside of that policy though, as the battery pack that works so well in the e-208 feels a little under-fed here. A little more bespoke engineering might have gone a long way.