Stylish, roomy and comfortable seven-seater is awash with gadgets 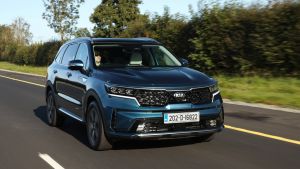 The most striking feature is the styling as the Sorento follows the trend towards bigger and bolder front grilles.

It was meant to be a regular test but Lockdown II turned this Kia into a long-term resident of our driveway. It proved to be a godsend.

You see, the Sorento is less an SUV and more of a home extension. Kia’s big seven-seater was always a bit of a family bus but the new one has upgraded into a luxury coach. All it’s really missing is a portable loo.

It even comes with an intercom system that lets the driver bark instructions – or warnings – to the passengers in the third row via the rear speakers. Designed to protect parental larynxes, it also adds greater gravitas to the “If I have to come back to you. . .” warning when delivered through a set of Bose stereo speakers.

It seems terribly trite to talk about how far Kia has come over the last few decades but anyone who has watched the transformation of the Korean auto brand is transfixed about their leap from discount brand to proper mainstream – and now to viable alternatives to quasi-premium brands.

Then again, who would have considered a €50,000 Kia as a viable proposition 20 years ago. Many will now.

The most striking feature is the styling. Following the trend towards bigger and bolder front grilles, the Sorento makes its presence felt on the road.

It seems anathema that in the age of electric cars grilles originally designed to let in air to cool the engine are making a comeback. However, as a BMW designer recently explained, the front nose serves a purpose again these days, housing a plethora of radar sensors and antennae in the advent of driver aids.

In terms of looks and physical presence, this Kia is ready to mix it with the bigger SUV brands. The Sorento was never small but this time it has grown significantly with an extra 95mm in overall length. It’s a good-looking car that turns heads.

But the big selling points, as far as Kia is concerned, are space and refinement. On both counts Kia can claim credit. This is a big, roomy, comfortable car designed with interstate family trips across middle America in mind. For all our sense of global self-importance, it’s fair to say Koreans see Europe through the prism of the United States. And while that often proves their downfall when it comes to sportier cars, it’s a benefit when we’re talking about mile-munchers.

So, as with another Asian model that’s also built with Americans in mind, the Toyota Camry, this Kia is like a motorised couch but in a good way. In fact, it’s probably more of a motorised sittingroom given the space. Up front you have a pair of big comfy pseudo arm chairs. Behind is a middle row of moveable seats that are just as comfy and with legroom to rival a Skoda Superb. Finally, flipped out of the boot floor is a third row of two seats that offer the sort of headroom and legroom that you’d find in a regular supermini.

As for the boot, its cargo hold of 910 litres is akin to many small vans, expanding to a whopping 2,100 litres with all rear seats down. Admittedly when the third row is in action that boot shrinks dramatically but you can’t have everything in life for €50,000.

Forget about the Sorento as a farming workhorse with comfy seats: the fact the diesel version comes only in two-wheel drive is a clear statement of this car’s intent to target the suburban market.

As you would expect these days, it’s awash with gadgets, mostly controlled from a pretty logical touchscreen in the centre of the dash. It’s not going to wow you in the same way that the premium car brands do but you can take comfort from the fact that Korea has a strong reputation when it comes to tech reliability these days. And there are some really impressive features on board.

For example, when you hit the indicator left or right, the middle of the driver’s digital speed display turns into a video feed from a camera on the wing mirror. It means you get a great view right down the side of the car as you turn in, preventing any chance you might clip a cyclist or pedestrian as you do. This isn’t high tech in the current age of parking cameras, it’s just a really impressive application that will have real-life benefits for drivers and road users. Other car companies should quickly copy it.

Arguably, the biggest tech weakness is under the bonnet where the 2.2-litre diesel would seem to be increasingly out of favour with legislators and tax authorities these days. It’s a gusty performer, if not exactly quick but offering 440Nm of torque from 1,750rpm is strong enough to move this big SUV along in comfort and it never feels sluggish.

The good news is that a plug-in hybrid (PHEV) version lands in Ireland from February and – thanks to its low emissions figure and grants from the Sustainable Energy Authority of Ireland – will be at least €1,500 cheaper than the equivalently equipped diesel. It will also cost €280 less in annual motor tax and, for the cherry on top, adds four-wheel drive to the car.

Staying on theme, the steering is light and, though engaging, it reflects the general sense of comfort that comes across in every facet of this car. It’s an improvement on its predecessor, thanks to the Sorento’s redesigned platform and a new rack-mounted electro-mechanical power steering set up. Some of these systems turn steering into rubbery point-and-click operations but there is a good deal of engagement in this system. It’s refined, the watchword for the new Sorento.

Overall, it’s hard to fault it as a stylish big family seven-seater. Though it’s hard to see why you would opt for the diesel over the PHEV, unless you are doing some really big motorway mileage.

If you’re looking for sittingroom comfort when on the move, €50,000 or so for a Kia home extension in the form of the Sorento seems a pretty tempting choice.