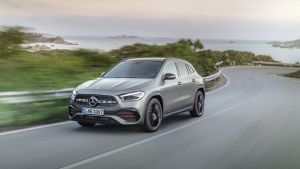 The Mercedes GLA’s 200D diesel engine feels a little old fashioned in this hybrid-electric world but it’s hugely economical in daily use.

You do wonder at which point a comfortable middle ground becomes the space between a rock and a hard place. I fear that it’s into such a niche that the new Mercedes GLA has wedged itself.

Previously, the GLA was just a Mercedes A-Class hatchback on stilts and that was fine as far as it went. If you didn’t fancy the expensive upgrade to a GLC SUV and were one of those people for whom the hatch just wasn’t enough, then you had the GLA. It was far from one of our favourite cars but it was blamelessly competent all the same.

Now, things are a little different. It’s not that the new GLA represents a step back from the old one – quite the reverse, in fact – but the playing field has moved. It’s as if someone took a good, firm grip of the Subbuteo mat and tugged hard. No longer is the GLA’s primary opposition the rather underwhelming first-generation versions of the Audi Q3 and BMW X1, it is now the entirely-whelming second-generation versions of both.

On top of that, everyone and their mutt are at the premium-feel SUV and crossover game so the GLA has to fend off rivalries from car makers whose badges would normally not be fit to get through the velvet ropes that fence off Mercedes owners. It’s a hard-knock life.

Mercedes itself is not making the GLA’s life any easier. So many of the company’s new models are based on the same NGCC (new-generation compact class) platform that underpins the GLA that Mercedes is quickly becoming a maker of front-wheel drive cars by majority. The NGCC chassis is found under the A-Class, the A-Class saloon, the CLA coupe, the CLA Shooting Brake estate, the B-Class and the GLB, a medium-sized SUV that we’ve already driven and liked.

Using doubtless delicate fingers to prise apart a gap into which the GLA can slot, it kind of finds itself tucked between the GLB and the B-Class, more or less. It’s a little more softly styled than the GLB, a touch more affordable and it’s sportier. And it’s slightly less roomy than the B-Class, albeit in neither metric enough to be a deal-breaker. The thing is, is there any point to it? Does the GLA manage to make a compelling case for its own existence?

It’s a tricky question to answer, not least because inside there is virtually no difference between the GLA, the B-Class and the GLB – and in that line they are in ascending order of spaciousness. In some ways, this is a good thing. The standardisation of the MBUX digital dashboard (which looks as if someone has stretched an iPad out lengthways and splayed it across the dash) means that you get the same attractive, useful, customisable digital experience when you step inside. Our test car had the smaller of the two instrument screens but the larger of the two infotainment screens so, on balance, came across as pretty slick and high tech. The “Hey, Mercedes” digital voice assistant is of variable usefulness but the high-definition graphics on screen look rich, while menus for each system are pretty easily navigated.

Quality levels of both assembly and material are also better than good, although you’ll find cheap plastics if you go poking around (especially the brittle-feeling stalks for the gearshift and indicators). And while the GLA is not so spacious as the B-Class or the (optionally) seven-seat GLB, it is tolerably roomy for a family of four and a tall greyhound dog.

To drive, the GLA is pretty much exactly as you would expect it to be. It’s blandly efficient, rather in the manner of an A-Class hatchback, but rides better than the A thanks to longer springs and a little more heft in the kerb weight. It lacks the more incisive chassis of the CLA coupe (well, of course it does) but it’s far from unpleasant to drive. Refinement is good, comfort levels high. The 200D diesel engine (a four-cylinder 2.0-litre unit with 150hp and a rather impressive 320Nm of torque) feels a little old fashioned in this hybrid-electric world but it’s hugely economical in daily use. Mercedes claims 4.6-litres per 100km economy and we easily matched that in the real world. For those keen on trimming their carbon footprint, a plug-in hybrid model is imminent (net of arguments over just how clean a plug-in hybrid is or can be) and a fully electric version will follow in due course.

Here’s the thing. We could say pretty much exactly the same about the GLB. The GLB is only, model for model, about €20 more expensive per month than a GLA and yet it offers more interior space, the option of seven seats and styling that’s – and we cannot emphasise this enough – so much cooler than that of the GLA. The GLA looks like a swollen A-Class or a slightly more rakish B-Class (an underrated car in itself). The GLB looks like a mini G-Wagen. Case closed on the styling front, even if the GLA is really quite handsome.

The thing is, if it sounds like we’re down on the GLA, that’s not the case. Taken in isolation, it is a perfectly pleasant, even desirable machine. It’s also a massive step up from the old GLA, which suffered from styling that was less well-resolved and a cabin that was way too cheap and cramped in the back. If the GLB didn’t exist, we’d probably really love the GLA. But it does.