Does the ‘Urbanaut’ concept herald a future for people carriers? Mini seems to think so 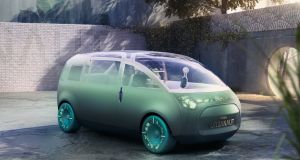 Whimsy in car design is a dangerous thing to deploy. Push it too far, and you end up with something that’s just too self-consciously wacky, like one of those Nissan Micra Mitsuokas that looks like someone has shrunken their Inspector Morse Jaguar in the wash.

However, some brands have a higher whimsy limit than others, and that’s most definitely the case with Mini. Whimsy is, equally, most definitely high on the agenda when it comes to the brand’s latest concept car, the gratingly-named “Vision Urbanaut”.

However, dig past the layers of hipster-speak and forced coolness of the car’s launch, and you start to get to something serious, that lies beneath – possibly the most truly Mini-esque Mini since the brand was re-invented by BMW two decades ago.

What is the Urbanaut? Well, if you listen to Mini’s people, it’s basically an infodump of buzz-phrases.

“Mini sees its future self primarily as an enabler of, and companion for, unforgettable times – what we might call ‘Mini moments’. The Mini Vision Urbanaut uses three curated Mini moments – “Chill”, “Wanderlust” and “Vibe” – to present a wide range of possible usage scenarios.

“The Chill moment invites you to catch a breath and pause in the here and now. The car becomes a kind of retreat, a haven where you can relax – or work with full concentration – during a journey.

“Wanderlust is the only Mini moment where the Mini Vision Urbanaut is being driven or driving with automated driving functions. The moment Vibe puts time with other people at centre stage – in every way,” said Oliver Heilmer, head of Mini Design, during the car’s presentation.

Now, to our ears that sounds rather as if Heilmer and his team stood for too long outside a hipster-friendly coffee shop. However, get past all that, and something interesting starts to emerge.

First off, and arguably for the first time since the original 1959 Mini, the Urbanaut seems to have been designed from the inside out. It’s 4.46-metres long – long for a Mini, but only about the same length as a Ford Focus in reality – and is built around two lounge-like couches.

One, a semi-circular affair built into the windscreen area as if into a bay window, also doubles up as the instrument panel, and the long, sloping windscreen can also open up and out, forming what Mini calls a “street balcony”.

Behind, there’s another curving couch, complete with a side-table and pot-plant, which Mini calls a “‘cosy corner” (told you this got grating at times). Up the sides and over the roof there’s a textile-covered panel, which is backlit by LEDs and which can show animations and movement.

There is a single captain’s-style chair for the driver, which swivels to face the rear when the Urbanaut is in a notional autonomous mode. Mini clearly doesn’t want to alienate keen drivers, though, so there is a manual driving mode during which a small, kinda-oval, kinda-hexagonal wheel emerges from the dashboard/couch and a brake and accelerator come out from the floor.

So far, so typical concept car – lots of wild ideas, almost all of which will be successively watered down and replaced by items of greater mundanity by the time anything like this comes to production. Ah, but there’s a final twist. Having shown us the interior, Mini then showed us the exterior, which is the real star of the show.

It’s a pure MPV, almost a miniature Espace, and what Mini calls a “purist mono-volume design”. That means two things – that it really can maximise its interior space, and that – critical this – it’s not an SUV.

Hopefully, that means that Mini can see its way past the current obsession with all things 4x4 and into a future where we can make truly rational cars again.

Cars don’t get much more rational than MPVs. Interestingly, in the concept at any rate, there’s little to no styling as such.

The exterior panels are relatively plain, the shape conventionally MPV-esque boxy with a rounded front (a little as if someone had taken an Airbus and excised the wings and rear fuselage).

The Mini styling comes instead in the form of light – LEDs shining through a series of cheese-grater-like perforations in the front of the car.

The best part is that Mini is serious about building this car for real. While the brand certainly plans to make more SUV models, to complement the successful Countryman, the MPV model will likely go into production in 2022, with both petrol and electric models planned, possibly with the 1960s Traveller name (originally given to the wood-panelled Mini estate) given a revival.

London’s Irish pubs: all the lonely people, where they go to belong
Real news has value SUBSCRIBE