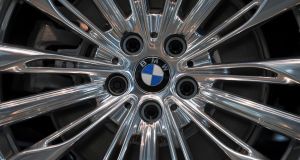 Dublin remains BMW’s core market, making up 2,364 of its sales this year, with Cork, its second biggest market, with 379 registrations

Profits at BMW’s Irish operation fell 75 per cent last year, with the drop largely attributed to a fall in sales.

BMW’s 3-Series is currently its best selling model, with 746 registrations, ahead of the 5-Series with 640 sales.

Plug-in hybrids have proved to be particularly popular, accounting for 723 sales so far this year, along with 186 fully electric cars.

Dublin remains the brand’s core market, making up 2,364 of its sales this year, with Cork its second biggest market with 379 registrations.

Despite the drop in profits and revenues the Irish division still paid dividends of €5.3 million to its parent operation BMW AG in Germany.

1 Son putting elderly dad under pressure to sign over land
2 How to gift your child a house deposit . . . tax free
3 BOI customers to be charged twice with bank fees on New Year’s Eve
4 Family in court dispute over hotels in Dublin and Galway
5 Stripe in talks for new funding at much higher valuation
6 Ryanair warns it may reduce more Irish services and relocate operations
7 Irish start-up which developed facial recognition for cows raising over $50m
8 Workers have little idea of the cost of retirement income
9 Willie Walsh appointed head of the International Air Transport Association
10 Irish designer of Oxford vaccine: ‘I’ve never worked so hard in my life’
Real news has value SUBSCRIBE