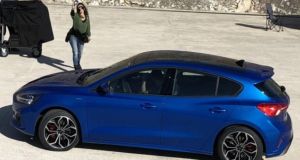 A quick-thinking reader of Hungarian website Vezess spotted and managed to photograph Ford’s new Focus, before they were chased off by annoyed Blue Oval staff.

The car was being filmed in Cascais, just outside Lisbon, for publicity footage. Although the new Focus has been seen under heavy disguise before, this is the first photo of the car as it will look when unveiled at the upcoming Geneva motor show.

The photograph shows that the Focus will take a lot of the styling cues of the new Fiesta, including its sharply-swept up rear window line. As with the Fiesta, the shape overall seems to be very evolutionary, with little in the way of styling innovation. In fact, it’s so generic a shape from this side view that you could easily mistake it for a Seat Leon or the new Kia Ceed.

Overall, the Focus is expected to stay at around the same size as the current model, but by using the ‘Global-C’ platform shared with the Fiesta, Ford has engineered in a reported 50mm of additional rear legroom, which should go some way to answering one of the major criticisms of the current model.

The interior will see a major change, taking up much of the style of the Fiesta, including the freestanding touchscreen for the SYNC3 infotainment setup, which will be available in sizes up to eight-inches across. The rest of the cabin will take on a much simpler, less stylised look than that of current Ford models, partially to increase the impression of space inside.

Engines will be broadly carried over from the current range, with the 1.0-litre three-cylinder EcoBoost turbo engine available in 100hp, 125hp, and 140hp forms forming the core of the range. There will also be a 1.5-lite EcoBoost turbo petrol and a 2.0-litre turbo petrol for high-performance ST models. And an RS? Nothing’s confirmed as yet, but Ford insiders are known to be keen on an ultra-high performance derivative to act as a halo model. Diesel power will come from the current 1.5 and 2.0-litre TDCI engines, and there will at some point in the model cycle be an all-electric Focus, the first such model to be sold in Europe.

As with the current model, there will be no three-door Focus, but a four-door saloon and an estate are likely, and an ‘Active’ quasi-SUV model to act as a rival to the likes of the Skoda Octavia Scout is a dead cert.

Sales of the new Focus will being towards the tail end of this year, once we’ve had a proper look at it in Geneva.