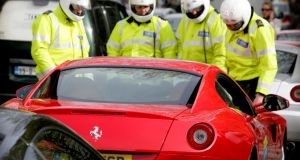 Members of the Garda Traffic Corps: In September 2017 the strength of the corps was 631, down from 669 in January.

The chief executive of the Road Safety Authority has written to the acting Garda Commissioner to express concern over the failure by the force to meet its own commitment to a 10 per cent increase in the strength of the Traffic Corps by December 31st.

It has also asked Dónall Ó Cualáin to clarify exactly how the 10 per cent increase will be calculated. This is because the strength of the Corps fell over the course of 2017, from 681 in January to 640 by the end of October, mainly due to retirements.

The correspondence comes after the RSA chair Liz O’Donnell said earlier this month that the strength of the traffic Corps was 681. Its notional full strength is 1,200.

However, it appears the current strength of the force is lower.

In response to a query from The Irish Times a Garda spokesman said as of “October 31st, 2017, there were 640 members of An Garda Síochána attached to the Traffic Corps”.

He said an additional 80 officers would also be appointed to the corps – which is shortly to be rebranded the Roads Policing Unit – over the remainder of 2018, bringing the total number of additional officers assigned to traffic duties to 150.

A spokesman for the RSA said: “Of serious concern is the fact that the commitment in the Garda Policing Plan 2017 to ‘incrementally increasing resources to Roads Policing Units by 10 per cent across all regions by end Q4 of 2017’ has not been delivered.”

He said anything less than a 20 per cent increase on the baseline figure of 681 will be completely unacceptable to the RSA.

Separately, an unpublished Garda report on roads policing, covering the year to the end of November 2017, found that arrests for driving while intoxicated “increased week-on-week” last year and were 11 per cent higher at 8,110 during the first 11 months of the year, compared to the same period in 2016.

It noted that there were more arrests for driving while intoxicated in April 2017 than in any other month over the previous five years. Roadside drug testing was introduced in April last year and contributed to the higher level of arrests, the report found.

While there had been “some difficulties following the roll-out of training” for gardaí to perform roadside drug driving tests “these matters have now been addressed. As of November 14th, 2,501 drivers had been trained to use the new testing equipment.

It is understood the first of several hundred prosecutions for drug driving will appear before the courts in the coming months.

There was also a 5 per cent increase to 70,771 in the number of mandatory intoxicant checkpoints over the first 11 months of last year, although an examination of the data shows the highest level of recorded checkpoints was highest during the first three months and declined over the year.

The report also notes there was a 12 per cent decline in the number of interceptions for speeding in the year to November 2017, mainly because four of the eight Garda vehicles used for non-intercept speeding detections are out of action due to mechanical defects.

This will include roads around schools, community centres and other locations where pedestrians are being killed and serious injured.

Some 638 drivers detected with between 50mgs and 80gs of blood alcohol received penalty points over the first 11 months of 2017, marginally higher than the 622 over the same period the previous year. According to the Garda report, 3,505 drivers have received this penalty for drink driving at this level since this sanction was introduced in 2012.

This penalty is shortly going to be removed and replaced with an automatic disqualification.

It is unclear if the 10 per cent increase is based on the current strength of the corps or its strength at the start of last year.