Gap between a retail price and a dealership price can be as much as €1,500 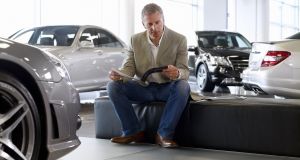 Delivery charges give car dealers a crucial bit of wiggle room when it comes to discounting.

If you order a new jumper, a pair of jeans, some DVDs, a book, or even some household cleaning products from almost any online source, chances are that you will not be charged extra for delivery.

Generally, once you’re spending more than a nominal amount (usually between €50 and €100), you won’t have to pay any extra for shipping.

With cars, of course, that has never been the case. The price you see is most definitely not the price you pay, and ‘delivery and related charges’ are always extra. The gap between a retail price and a dealer price can be as much as €1,500.

Why? Well, part of it is down to consumer law, some is pure tradition, and the rest is because these charges do provide a critical lifeline for car dealers working on wafer-thin margins. What that all means for the consumer is debatable at best.

The consumer protection law goes back a long way, and the basis of it is that if a car manufacturer was to try to impose a fixed on-the-road price, inclusive of dealer charges, then that would be considered anti-competitive.

A spokesperson for the Competition and Consumer Protection Commission (CCPC) told The Irish Times: “Under competition law, car dealerships and manufacturers must set their own individual prices and related charges. Any agreement or collaboration on charges between competing dealers and/or distributors is expressly forbidden.

“A manufacturer can set a recommended retail price, but individual dealers must be free to discount this price if they wish.”

Car makers and importers in Ireland have fallen foul of this rule in the past. In 1996, the Competition Authority (the CCPC as was), opened an investigation into Opel, which had set a fixed ‘open book’ price for its cars. “This type of conduct represents resale price maintenance which is a breach of competition law as it removes competition at the retail level and would lead to higher prices for consumers if not challenged.”

Both Citroen and Ford dealers were investigated, in 2009 and 2004 respectively, and indeed prosecutions and even convictions arose, when the Competition Authority found that cartel-like practices were being used to fix the prices of some models.

Currently, brands such as BMW get away with quoting an ‘on-the-road’ price by pointing out that it only recommends a delivery charge, and that its dealers are still free to adjust that as they see fit.

However, it does seem a little odd that given all the loopholes and frequent breaches in consumer protection, that such pricing strategies are held in contempt by the authorities.

After all, on-the-road pricing is very common in other markets, and there’s a strong argument that the consumer is given a much more transparent price when it’s allowed. You wouldn’t expect a shop in Cork to charge you more or less for a Mars Bar than a shop in Dundalk.

The CCPC doesn’t see it that way, however, saying: “Consumer law requires traders to provide the total cost, including extras, of a product to a consumer before they buy. In the specific instance of when a manufacturer is advertising a car for sale, the manufacturer can only advertise the recommended retail price and state that delivery and related charges will be extra.

“If a consumer then decides to buy that car, they should be provided with the total price by the dealer before they buy. Auxiliary costs such as motor insurance, tax etc, are not dealt with specifically under consumer protection law.

“However, through our information campaigns, we would encourage consumers to do their homework about such costs before making a purchase.

“Competition law very clearly states that individual traders must set their own prices independently. If traders were allowed to collectively set their prices and/or costs, this would likely distort or eliminate competition in the market and cause consumers to pay higher prices than they otherwise would.

“Particularly when it comes to a high value item such as a car, we strongly encourage consumers to use the variety of prices to their advantage by doing their research and comparing different competitors’ prices. Consumer protection law facilitates this as it helps ensure that consumers are comparing the end-price they will pay.”

There’s also an element of tax efficiency. According to some car makers, adding the delivery price into the quoted price of the car would mean an increase in vehicle registration tax (VRT), so there is an argument that says putting the delivery and related charge outside the recommended retail price actually saves the consumer a little.

There is also the argument of ‘it’s always been done that way’ about delivery charges. Ciaran McMahon, managing director of Ford Ireland said: “It is an anomaly of the Irish market that has come down to us from our forebears, it is just the way the market is set up and all brands operate the system.

“Pretty much since the first Model Ts were hitting dealerships across the country, car brands always quoted an ‘ex-works price’ [in other words, the price of the car as it leaves the factory gates, not when it rolls off the dealer forecourt] for a car on top of which an extra charge was added.

“What is covered by that cost will vary from dealer to dealer, but for all of them, it covers the cost of delivery of the vehicle to their dealership. Many dealers will also include such items as the cost of the pre-delivery inspection, new plates for the car, perhaps a full tank of fuel.

“Each dealer will have their own range of items that are covered. So, ‘headquarters’ does not get involved in the setting of that cost or what is covered, it is all at the discretion of the dealer.

“In today’s very competitive new-car market, everything is up for negotiation and I am sure that many customers push the dealer on all aspects of the ‘deal’, including the delivery and related costs.

“Customers are savvy enough to do their homework, shop around and compare what is on offer across dealerships and indeed, across brands. More than ever, real value is what will win out in the marketplace.”

That’s actually a critical point. On new-car sales, most dealers will operate with a margin of between two and eight per cent, with a precious few coming close to the higher levels.

Delivery charges give them a crucial bit of wiggle room when it comes to discounting. In one sense, it may look as if the extra charges are simply price padding, and certainly they are just that if someone goes into a dealer and doesn’t try to negotiate the best price.

But for those who are haggling, it gives dealers an extra weapon in the negotiations. Is that harmful to consumers? Possibly so, but it is ‘always the way things have been done’ and the motor trade is nothing if not adept at swerving through the tighter hairpins of consumer law.

Take metallic paint for example. A modern option? Not really – stuffy old Wolseley was offering metallic paint as an option in the 1950s, and it has become an increasingly common option box to tick. But is it an option at all, really?

Look at the price lists of any car brand now, and you will see that maybe only one or two paint options are included in the price, and the rest are optional extras, sometimes costing as much as €1,500 or more (although for most mainstream cars there will be metallic options for around €500-600, with some as low as €250).

You don’t have to have metallic, of course, but you may be restricted to a rather bland white or black paint if you don’t pony up the extra. Another ploy by the car makers to vacuum your wallet?

The innocence card is played heavily when it comes to this metallic premium. A spokesperson for Mercedes-Benz Ireland said: “Strange as it may seem, there is a body of motorists that prefers standard, non-metallic paintwork.

“Mindful that metallic paint can make a difference of around €800 on most of our models, plus VRT on top, the automatic inclusion of metallic paint in the price across an entire model range would effectively penalise those customers whose preference may be for a standard, non-metallic, colour.”

Which is fair enough as it goes, but then one could equally argue that by including the cost of a metallic paint in the price, one is giving greater transparency to most buyers, and rewarding those who fancy a plainer finish with a welcome discount. You say po-tay-to, I say po-tah-to . . .

As is so often the case for the Irish car buyer, the situation remains confused. Some manufacturers do indeed publish ‘on-the-road’ prices, but these, as in the case of BMW, are simply the recommended retail price, plus a nominal amount on top for delivery and related charges.

Dealers are not bound by these prices, and according to consumer law, cannot and should not be. In world of instant online clicks to purchase, though, is that still a viable system?

It’s well known that many consumers are reluctant to negotiate, and indeed become very stressed and discomfited by the prospect of doing so.

So are extra, unpublished, charges an opportunity for haggling, or a way of adding extra cream to a price that some will be too nervous to argue over?